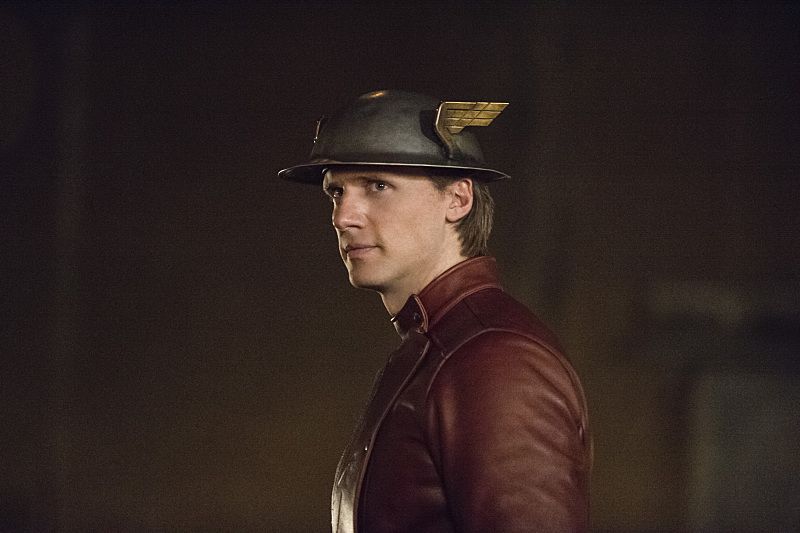 Comic fans have known this moment was coming for some time, but for television fans, meeting Jay Garrick (Teddy Sears) is all new.  This week THE FLASH reveals everything there is to know about Jay Garrick, a man literally from another world. In his world, Jay is The Flash, but in the world, he is just a man– and, fortunately, not a man who is willing to stand by and let our heroes and their city get pulverized by a menacing new threat known as Zoom.  Not only is Zoom not of our Earth, but he has a startling ability that threatens more than just Barry Allen (Grant Gustin) — for Zoom controls the power of the portals between the two worlds.

But after misplacing his trust in Dr. Harrison Wells (Tom Cavanagh) last season on THE FLASH, Barry is not so quick to trust strangers offering to help.  He feels that trust must now be earned.

In chatting with press, producers, writers and brothers Aaron Helbing and Todd Helbing, along with star Teddy Sears, talked about what Jay Garrick brings to THE FLASH universe and the big introduction of the multiverses.

What was it like bringing Jay Garrick to life on screen?
TEDDY:  I didn’t anticipate how thrilling it was going to be when I said yes.  Beside the obvious stuff that I’m suddenly 8 years old and running around in the backyard playing superheroes with my friends, that is sort of a given.  But what I didn’t anticipate was sort of how important it felt when I was doing it.  It’s weird and hooky and maybe very actory, but it was something very important that began happening — more specifically, putting on that helmet.  There’s that scene where I’m reunited with the helmet for the first time and I remember shooting that and there was a real awe and reverence for seeing this thing that was absolutely not acted at all.  There was such substance in that moment.  I just keep coming back to this feeling that, “Wow, this just feels really important.” . . . It feels wonderful. It is such a tremendous honor.  The goal is to make this guy a 100% human being who has a past, a history and conflicting feelings — all the things that make humans so wonderful and complex to watch.

There seems to be a bit of spark between Caitlin (Danielle Panabaker) and Jay in this episode.  Is there something going on there?
TEDDY:  There’s sort of a connection that these two have — a comfort level.  Sort of an instant comfort level.  That wonderful thing that you don’t get with too many people in life that I believe these two experience.  So I think they are going to explore that a little bit.  Jay and Caitlin are part of this bigger team of S.T.A.R. Labs and they are going to have a series of interactions that we’re going to explore.

What is Jay’s motivation at this point?  Does he want to get home?
TEDDY:  Jay’s biggest rival is Zoom and he needs Barry’s help to defeat this guy.  He knows his speed and he knows what he is capable of.  So he very much needs Barry.  He needs Barry to harness these powers and depths Barry didn’t really know he could reach.  He needs Barry to achieve these things in order for him to defeat Zoom.  So it’s kind of a mentor-mentee kind of thing that you start to see develop.  His larger goal?  I don’t know.  I just think he wants Zoom gone and he certainly can’t do it by himself.

It seems like Jay might be hiding something.  Is he hiding a secret?
TODD:  There is something he is struggling with that you will start to learn in the next couple of episodes.  That is partly where Cailtin comes into play.

Does Jay want to get his powers back?
TEDDY:  It’s something that is definitely on his mind, but right now he is focused on stopping Zoom.

Is Jay frustrated by his lack of powers in being able to help the way he is used to helping?
TEDDY:  I would certainly say there are frustrations to not being able to do what he is used to doing and helping the way he is used to helping.  But given his background as a scientist, he is able to put that into play.  So even though he is not able to physically do what he is used to doing, he is absolutely able to help through knowledge.  Because of that, he cannot do it himself, so he might as well use what he knows and push Barry to go further and go deeper and farther. It also deepens and strengthens the coach-athlete dynamic.

What kind of villain is Zoom?  Why is he sending all these guys after Barry?
TODD:  He’s a speed demon.  Last season Reverse Flash/Wells had to hone Barry to get what he wanted.  But Zoom is like your worst nightmare.  If Zoom can’t get these guys to do what he wants, he will eventually show up and start taking care of things himself.  He’s the scariest speedster on the planet.
AARON:  Where Wells had a bit of a conscience now and then when it came to Barry, Zoom just wants him dead.

Can you talk about the decision to kill off Ronnie Raymond (Robbie Amell)?
TODD:  That is more of an Andrew [Kreisberg] and Greg [Berlanti] decision.  We, obviously, love Robbie.  He was amazing as Firestorm.  But there is a LEGENDS [OF TOMORROW] aspect that we’re taking into consideration.  We just love working with Robbie.  I can’t say anything more than that.

How is Dr. Stein doing now that Ronnie is gone?
TODD:  Obviously, with what happened to Ronnie, he’s missing a side of him that he’s had for quite a while now and that is going to start to sneak up on him.

Can you say if Ronnie is actually dead or if he could be on Earth 2?
AARON:  We’re in THE FLASH verse, so there is Earth 2 and there is the multiverse.  So there is always the possibility to see him come back.

How much are we going to see of Earth 2?
TODD:  Since we introduced Earth 2, there is always the possibility we’ll go there, but not necessarily early on.  But you’ll see more of it.

Will we get to see the other Jay Garrick, the one from our world?
AARON:  Possibly.
TODD:  Keep watching.  It’s always a possibility.
TEDDY:  I hadn’t even considered that.  We are in a world of doppelgängers after all.
TODD:  Anything is possible.

What is Jay and Barry’s relationship going to be like?
TODD:  It’s more of a coach-athlete relationship.  Jay is the older brother that Barry never had.  He’s more experienced and his attitude is a little bit more confident.  So he is a teacher to him. . . Last year Barry didn’t really have anybody that he could speak about being a speedster with.  It’s not like he could go out and have drinks with Wells about being a speedster, but he can with Jay, and Jay can sort of mentor him about the powers that he has and figure out the best way to use those.
TEDDY: I like the older brother analogy too versus a father-figure.  That is a very different dynamic.  There are certainly going to be some overlap, but there’s some things you can only talk about with an older sibling about than you can talk to a dad character about.  And I really like Grant — as a person, I really like Grant — so there’s a lot of that.  It’s hard not to like Grant.  But for Jay and Barry, that translates.  There’s a real desire to be around him and want to lend help, which is also fun to play.

How long before we get to see a bit more of Killer Frost (Danielle Panabaker) and her storyline?
AARON:  That will be answered a little bit down the line.  But I can’t tell you exactly when you’re going to see that.
TODD:  We thought about it and we definitely talk about it.  It’s just that everybody’s powers manifest at different times.  So we’re going to focus on Cisco.

What can you share about Cisco’s (Carlos Valdes) secret?  How is that going to affect the team dynamic and how will we see things escalate?
TODD:  I think like Cisco says: Wells gave this power to him and Wells was very evil, so he is just a little freaked out.  So I think as the season goes on, you’ll see him deal with that problem of:  How do I tell these guys?  When do I tell them?  And to sort of figure out this power that he has.

This episode introduces Patty Spivot (Shantel VanSanten).  What impression do you want her to make?
TODD:  We wanted to make her this very strong, hard-core female cop who has a clear purpose.  Like the Mark Marden (Liam McIntyre) story, we wanted to make her somebody who — like originally we talked about how she’s kind of like Felicity (Emily Bett Rickards) — but the second we started writing her, we felt like we had to make her quite a bit different.  To have her be a part of the show and the universe that we set up, Patty had to be somebody who was in this for the right reasons hell-bent on stopping Mark Marden and metahumans, and somebody who felt she could be part of the Metahuman Task Force and hold her own.

Barry and Iris (Candice Patton) have a history, but from this episode, we see that Barry has a spark with Patty.  Can you talk about that relationship and balancing it with Iris and Barry relationship?
TODD:  Iris is always Barry’s lightning rod — his best friend and first love of his life — but she just lost Eddie (Rick Cosnett).  So as she is dealing with that. So Barry and Iris are slipping back into that friendship mold and it leaves an opportunity to explore a relationship with Patty and see how that develops.  But Iris and Barry are childhood friends and loves, that is always going to be there.

The portal breaches, how big a threat are those?
TODD:  It’s not good for them.  But they figure out a way to sort of control it.  It’s very bad.  There’s 52 breaches and Zoom can come through any of them with whoever he wants.  They have to figure out quickly how to manage the biggest threat to them.

Since the portals are a two-way street, can anyone go between Earth 1 and Earth 2?
TODD:  Theoretically you could do that, but for right now, Zoom is the only one who has figured out how.

To further get everyone excited, here are a few the quotes from the upcoming episode “Flash Of Two Worlds.”  Let’s see if you can guess who says these fun quotes:

QUOTE:  “Kismet — if you believe in destiny or fate.”

QUOTE:  “I think you need to take a breather.”

QUOTE:  “I’m still trying to wrap my head around the whole idea of time-travel.”

QUOTE:  “He is an unstoppable demon with the face of death.”

QUOTE:  “Those days are over.”

QUOTE:  “Are you aware what happened to my previous partner?”

QUOTE:  “I thought it would be harder than this.”

QUOTE:  “I was being thorough.”

QUOTE:  “Any closer to cracking his no-code?”

QUOTE:  “What has happened to you?”

QUOTE:  “Not everyone is Harrison Wells.”

QUOTE:  “Nothing is what it seems.”

QUOTE:  “Time to learn something new.”

QUOTE:  “If not, then this Zoom is not going to be your only enemy.”

With those quotes and teasers rattling around your brain, have fun meeting Jay Garrick and Patty Spivok and watching an all new episode of THE FLASH on Tuesday, October 13th at 8:00 p.m. on the CW.