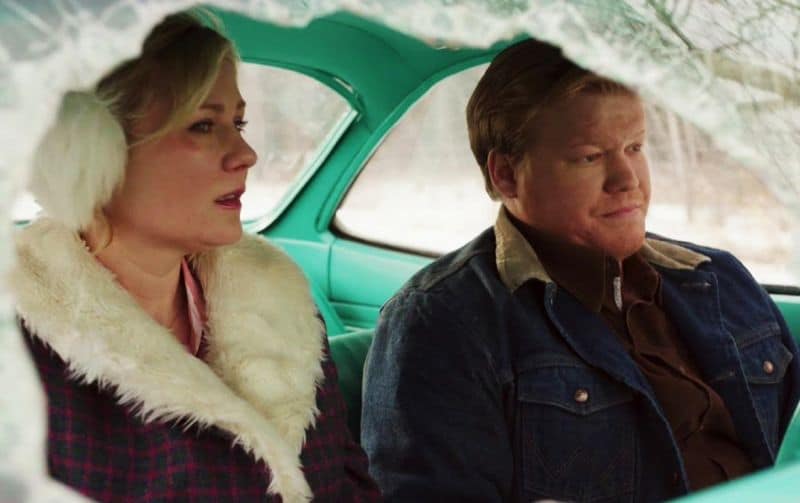 Tonight begins season two, and because it’s an anthology series that isn’t reusing it’s cast (unlike American Horror Story), none of the familiar faces are back. This provides a considerable obstacle for the show to overcome. However, overcome it, FARGO does, immediately hooking fans in to what promises to be another excellent miniseries.

Season two of FARGO is set in 1979, or at least starts there. It is still in the same part of the country, and has much of the same tone, but now has a period component added in. The music, the cars, the fashion, even Ronald Reagan (Bruce Campbell, Burn Notice), help sell that image. As such, it takes the specific spirit of season one and ups the weirdness even more, with great results.

In order to reach out to existing fans, FARGO season two does have two characters that connect it to the freshman run. Lou Solverson is the detective on the case. Played by Patrick Wilson (Watchmen) now, he is more than two decades younger than Keith Carradine’s version of the character. Lou’s daughter, Molly, the hero of last year, is five years old in this outing, so she probably won’t get involved much. FARGO season two is a case referenced in the first season and we know Lou will make it out alive, but that’s about all we know.

Lou is going through a tough time when this season begins. His wife, Betsy (Cristin Milioti, How I Met Your Mother), is sick, and going by last year, doesn’t have a lot of time left. Thankfully, he has a good father-in-law, Hank (Ted Danson, Bored to Death, Damages), also in law enforcement, to help him out. I’m not sure yet how the case will unfold, but if Lou and Hank are the primary investigators, sign me up for the season pass!

Once more, FARGO has an average, quirky citizen mixed up in murder. This time, it’s Peggy Blumquist (Kirsten Dunst, Spider-Man), a hoarder housewife, and unlike last year’s Lester, her spouse, Ed (Jesse Plemons, Breaking Bad), is not the victim. Peggy doesn’t mean to do wrong, but she’s scared when events occur outside of her control, and while she doesn’t handle them as well as we’d like to think most people would, it’s hard to hate her, at least at first. What she does next will determine if she remains sympathetic or not.

What’s interesting about what happens with Peggy, which I don’t want to give away, is that it ties into a familiar urban legend. FARGO bills itself as a ‘true crime’ story, with words on the screen at the beginning of the episode proclaiming that what you’re viewing actually happened. It didn’t; that’s part of the conceit of the show, that it’s done in the style, but is not actually real, so those words are a lie. However, tying in something that lots of people think happened will only reinforce the believability of the premise.

It’s less clear who the Billy Bob Thorton-esque villain is this year. There’s an entire mob family introduced in the premiere, led by Otto Gerhardt (Michael Hogan, Battlestar Galactica). It doesn’t seem like Otto will be long for this world, but he has a wife, Floyd (Jean Smart, 24), three sons, Dodd (Jeffrey Donovan, Burn Notice), Bear (Angus Sampson, Insidious), and Rye (Kieran Culkin, Scott Pilgrim vs. the World), and a daughter, Simone (Rachel Keller, Hollidaysburg), so it’s likely one of them will emerge as the bad guy. Or, it would be more fun if we’re left wondering who in the clan is the worst as the installments play out.

This year’s cast also includes Nick Offerman (Parks & Recreation), Brad Garrett (Everybody Loves Raymond), Bokeem Woodbine (Saving Grace), Zahn McClarnon (Longmire), and many more, so like last season, I doubt viewers will get bored or be hard up for a fresh face to come in and shake things around.

If the season premiere is any indication, FARGO has done it again, and I look forward to another excellent batch of television episodes.