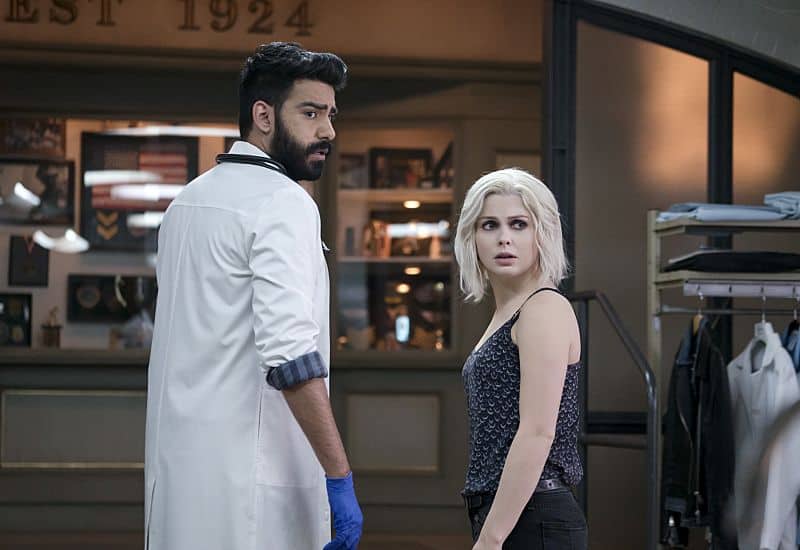 This Winter’s TCA tour included presentations from the CW, who presented on the 4th day of the tour.  Here are some of the featured television shows and specials that caught our attention:

CONSTANTINE, the animated series, ordered to series on CW Seed.

To be determined at a later date, renewals for:
iZOMBIE
THE 100
THE ORIGINALS
RIVERDALE
NO TOMORROW
FREQUENCY

Note: Episodic order counts have not been determined for any of The CW shows next season just yet. (Safe to assume ARROW, THE FLASH, SUPERGIRL, SUPERNATURAL will get 22 episodes.)

While FREQUENCY and NO TOMORROW were very well done, very well executed, the linear numbers and ratings were not where the CW wanted it to be. So while not officially canceled yet, chances are slim that either show will continue beyond their 13 episodes.

As to if and when SUPERNATURAL will ever get a series end-date, Mark Pedowitz noted: “As long as it’s performing and the boys want to do it — and I’m sitting in this chair — it will have a long life”

On the status of the CHARMED reboot, Pedowitz said that other than the incorporation of the “Power of 3,” it will be a self-contained show and the CW is still waiting on the pilot script. No word on whether original characters or actors will be incorporated or referenced.

On the question of whether Nina Dobrev will rerun for an appearance in THE VAMPIRE DIARIES series finale, Mark Pedowitz said, “Julie [Plec], Kevin [Williamson], studio and the CW have promised a fantastic series finale.”

While Netflix does not give ratings for CW shows streamed on its platform, the CW is able to get a sense for how a show is doing from its own streaming service through the CW app.

Quizzed again about the creative decisions to kill off two fan-favorite characters in Season 3 of THE 100, Mark Pedowitz said, “Characters on THE 100 do live or die. It’s post-apocalyptic. It was a plot point and we support our showrunners on it.”

On the decision to keep renewing the low-rated CRAZY EX-GIRLFRIEND, Pedowitz said that both CRAZY EX-GIRLFRIEND and JANE THE VIRGIN, as well as the DC shows, and have helped establish the current brand for the CW and deserve to be renewed accordingly.

As to the fate of THE ORIGINALS after THE VAMPIRE DIARIES ends, Pedowitz hopes THE ORIGINALS can continue and that it depends on its performance this Spring.

The RIVERDALE pilot episode will air for 47 minutes, rather than the standard 42 minutes.  The CW felt that it deserved the extra time due to its adult themes and story elements.

Finally, Mark Pedowitz stressed that the CW is a very strong digital company, which has doubled the amount of show streams and commercial ads in the past year.  He noted that the CW is different from other shops in town networks in that it is feisty.

The highly-anticipated new drama series RIVERDALE is a great blend of elements seen in classic series such as TWIN PEAKS and DAWSON’s CREEK — including a murder mystery involving the characters from the comic series ARCHIE.  As crazy as it sounds, the show pulls it off and it makes for an intoxicating and addictive show.  Creator and executive producer Greg Berlanti is credited for adding the one secret ingredient that elevates the show from just being another “coming of age” or “slice of life” story, he said the show needed a dead body.  It morphed the show into a “loss of innocence” story with noir edge. In fact, executive producer Sarah Schedcter welcomes all the TWIN PEAKS, BLUE VELVET and FARGO comparisons as stories of “small towns gone weird.” In fact, just to clinch the link between the shows, former TWIN PEAKS star Madchen Amick now co-stars in RIVERDALE and Luke Perry brings his “90210” fame to the show as well.  Luke Perry laughingly described his character Fred Andrews aka Archie’s dad as “a simple guy, and he doesn’t have anything to hide and wears his heart on his sleeve.”  He also noted that it is nice to show that Fred really cares about his son Archie.  But he did ruefully admit that the Pop’s diner set has a “freaky, scary, kind of textured Peach Pit vibe.”  As to the infamous Betty and Veronica love-triangle with Archie, RIVERDALE naturally has its own spin on that.  In fact, star Lili Reinhart who portrays Betty said that in RIVERDALE, “These girls are so much better off as friends and as allies . . . we are breaking the barrier of saying you are either a Betty or a Veronica.”  She and co-star Camila Mendes, who plays Veronica, say that they both have a little Betty and Veronica inside.  Co-star K.J. Apa said as to getting the role of Archie that: “I knew coming into it that playing Archie was a big responsibility,” and he just wanted to create the best version of him.  It will be a process of growth and discovery.   As to Madchen Amick’s character Alice Cooper, Betty’s mom, she has a specific journey that she goes on, which will hopefully see some definite growth at the end as well.  Then co-star Casey Cott, who plays Kevin, said his character has his hands in everything that’s going on and will have a romantic relationship that is revealed in episode 4.  No less pivotal, Cole Sprouse, who portrays Jughead, said that in order to get in the right mindset for the role, he binge-watch episodes of THE TWILIGHT ZONE in order to channel his inner Rod Serling for this show. With mysteries a plenty, RIVERDALE premieres Thursday, January 26th.

With a zombie-apocalypse nigh in IZOMBIE Season 3, our heroes have their hands full.  But to keep things light, the brains-of-the-week will still have a vital role to play. Star Rose McIver’s favorites in Season 3 include: the “hot mess,” dominatrix and conspiracy theorist — though the taste of the fake brains is still as unappetizing as ever.  In fact, Rose said eating the replica brains is “not great.”  Another fun brain that is introduced in Season 3 is the father-and-daughter brains that Liv and Major consume, and unfortunately, Major gets the 14 year old daughter brains — much to everyone’s amusement.  When asked why the zombie theme is so strong right now in television, executive producer Diane Ruggiero attributed it to “wish fulfillment” and it presents a challenge of how would we respond to such a scenario. Commenting on the joy of having Aly Michalka as a series regular this next season, executive producer Rob Thomas said, “For the first 2 seasons, we had to pray that Aly wouldn’t be taken away from us!” He also said that for Season 3, the questions of:  “are you a higher-functioning creature [as a zombie] and is that the next step in evolution?” are more fully explored.  In addition, Season 3 examines the ethics and quandaries that arise when there is a “zombie military” protecting the undead.  And the question really hits home with: “Whose side are we on?”  So Season 3 will be different in that there will not be a  clearly defined antagonist or villain.  Zombies just want to survive and it becomes:  who is right?   So as Rob explained, the mystery is: who is on the right side?  As to Clive now knowing about the zombies, they are delighted that Malcolm Goodwin’s priceless reactions are still something they can incorporate into scenes.  And now that Blaine has lost his memory, Diane Ruggerio told David Anders,”I think you’re scarier when you’re not evil.” And David cheekily replied, “I’ve had a career that has been nothing but evil . . . it’s fun to be on the other side.”  Then as to the love-triangle between Peyton, Ravi and Blaine, Aly Michalka laughingly noted, “Peyton has good judgment on Ravi, but she has horrible judgment with Blaine.”  Season 3 of IZOMBIE premieres on April 4, 2017.

It was revealed that THE FLASH episodes 13 and 15 will feature the return of Gorilla Grodd with Keith David as the voice of gorilla friend Solovar.

That’s a wrap on the network and studio presentations from Day 4 of the Winter 2017 Television Critics Association Tour.  As a reminder: be sure to mark your calendars for the upcoming new series and specials as you do not want to miss out on the next great TV show that everyone will be talking about.