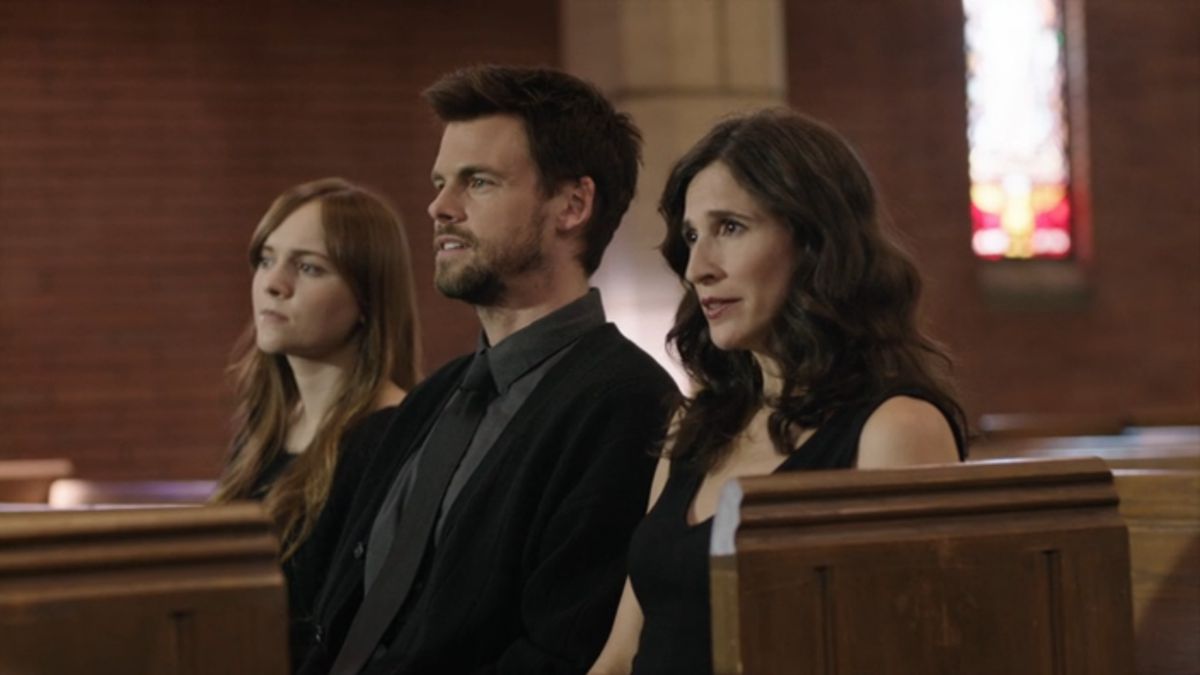 This Winter’s TCA tour included presentations from Hulu, who presented on the 3rd day of the tour.  Here are some of the featured television shows and specials that caught our attention:

Appearing for the panel were: Hugh Dancy, Aaron Paul, Michelle Monaghan, and executive producer Jessica Goldberg.  When asked about the show and its potential similarities to this new political era we live in, Jessica Goldberg remarked that it will be interesting to see how we as a nation look to faith in this change in American life.  Shows like THE PATH may resonate differently because of it as it deals with what people do when they’re not feeling included in our country.  She further noted that, “It feels different right now…. [but that] what you write, what you say. . . it felt relevant.”  When asked about what he has learned working on the show, star Aaron Paul said:  “I’ve learned that Meyerism is crazy and I’m running far away from them!” But as tot Eddie, his arc in Season 2 is about a deep and spiritual connection and, while Eddie is trying to get away, he can’t quite shake it.  As to her character, Michelle Monaghan said that Sarah has not lost her faith and knows that  sacrifices need to be made. So Season 2 starts with Sarah struggling over Eddie’s denial.  She also noted that Season 2 is reflective of people who feel marginalized. Then co-star Hugh Dancy said that his character Cal wrestles with his guilt by going deeper into the movement and exploring what community means.  Hugh also noted that while “faith is blind,” he would not say that THE PATH is arguing against faith.  When queried about where the show might possibly end, Jessica Goldberg says she has an image of where the show will end, but everything before that is mysterious and unknown.   THE PATH Season 2 premieres January 25th.

Unlike the adventure films of the same name, this limited series is a fictional story of a prominent UK comedian accused of heinous sex crimes committed against multiple women.  NATIONAL TREASURE in this case is an examination of the abuse of power.  Appearing at the panel were:  executive producer Marc Munden, creator and writer Jack Thorne and star Andrea Riseborough. Andrea Riseborough said her character Dee as like an “unraveling ball of yarn” and that her anxiety manifests physically. Jack Thorne said that unfortunately Britain has a problem with sex crimes being under reported as well as under convicted, and it is important to showcase the effects ad ramifications of such crimes through multiple viewpoints.  Thus, the legal story takes second place to the relationships of these three people of this family. It is a study of doubt, a legal drama, and more importantly about a broken family.   NATIONAL TREASURE premieres March 1st.

Hulu’s new drama series HARLOTS is about two feuding brothels in 18th century London. Appearing for the panel were: executive producers Debra Hayward, Alison Owen, Moira Buffini and star Lesley Manville.  HARLOTS is meant to be a female-empowering portrayal of women in that time period.  They emphasized that HARLOTS is a show was created by women and written by women.  They specifically wanted to show the economics of running a brothel as much sex work itself because that was one of the only jobs women could have at that time.  But as executive producer Debra Hayward stated: “It’s not polite period drama.”  It is about a lot of things that concern women that is still relevant today.  Co-executive producer Moira Buffini added: “It’s a family drama. It’s a workplace drama. . . yet all the writers have a sense of humor, and it’s not dreary and drab.”  Lesley Manville described her character as the brothel owner who is the “Lady MacBeth of brothel keepers,” who rules with an iron fist in order to keep her girls safe and clean. In that time, London had two levels of sociey: wives and daughters, and harlots. Yet men moved between both classes effortlessly as decent and indecent society intersected at the theater.   Lesley noted that,  “The best thing about costumes in that period is it was crystal clear what your class was.”  Unfortunately, Debra Hayward observed, “London was built on the back of the sex trade . . . It’s definitely not polite period drama. There’s a modernity to it.” Also noteworthy is the fact that HARLOTS was filmed entirely from the female-gaze — looking out and not from the male-gaze looking in.  HARLOTS premieres March 29, 2017.

Hulu’s comedy series CASUAL returns for its second season.  Appearing for the panel were:  executive producer Zander Lehmann along with stars Michaela Watkins, Nyasha Hatendi, Tara Lynne Barr, and Tommy Dewey.  Tara Lynne Barr described this upcoming season as each character is trying to be their best selves while still trying to be true to themselves. Creator Zander Lehmann chimed in to add, “The characters learn piece by piece, bit by bit, but do not necessarily change.”  To which co-star Nyasha Hatendi added:  “To watch them making those mistakes less and less as they go on is very empowering.” Zander further explained that you root for Valerie and Alex to be in each other’s lives because they need each other.  Yet, as Nyasha explained, this world was new to Leon and he is going through the discovery of this new world and trying to find what makes him happy.  Tommy Dewey then said as for his character, “Alex doesn’t trust his own emotions. He confuses love with a shiny object and Emmy was closest to love he got.”  CASUAL Season 2 premieres May 23, 2017.

After the demise of Pivot network, the comedy series PLEASE LIKE ME was lucky enough to be rescued by Hulu for its fourth season.  Appearing for the panel were:  creator/star Josh Thomas along with costars Emily Barclay and Thomas Ward.  When asked about whether he writes the shows with fan feedback in mind, Josh Thomas laughed and said, “If I listened to the audience all the time, the show would just be Jeremy and me kissing.”  As for the ongoing popularity of the show, Josh noted, “I think I got more likable as I got more famous.”  Though he did credit the show for one of the upsides of being a celebrity is that it has meant that he is now getting to kiss people out of his league.  PLEASE LIKE ME Season 4 premiered January 7th and is available now for streaming on Hulu.

BATMAN & BILL is a documentary about the true story of who actually created the iconic character of Batman.  The documentary specifically asks: what happened to Bill Finger, the overlooked and unknown co-creator of Batman? Appearing for the panel were:  Sheena Joyce and Don Argott, the filmmakers behind BATMAN & BILL.  They had met author Marc Tyler Nobleman while he was writing his book about the story of Bill Finger.  So the documentary BATMAN & BILL is not just about Batman creator Bill Finger, but also about Marc Tyler Nobleman, the writer who has championed Bill Finger and getting him the recognition he deserved. Sheena Joyce ruefully noted that, “documentary filmmakers love a secret hidden in plain sight.” BATMAN & BILL will premiere on Hulu in May 2017.

Hulu’s new drama series THE HANDMAID’s TALE is presented as a dystopian thriller based on the book by Margaret Atwood, which presents a world where child-bearing is considered a duty and rare privilege.  Appearing for the panel were:  executive producers Bruce Miller, Warren Littlefield, Reed Morano along with stars Elisabeth Moss, Joe Fiennes, Yvonne Strahovski, Samira Wiley, Alexis Bledel, Max Minghella, Madeline Brewer, Ann Dowd, and O-T Fagbenle.  When asked what attracted her to the role, Elisabeth Moss said, “I was still incredibly taken by the story and something I wanted to  see.”  She then added, ” “I selfishly said yes because I could not stand the thought of someone else doing it.”   In describing the unusual Serena Joy and Offred dynamic in the series, executive producer Bruce Miller wanted to make the characters the same age to increase the tension of the arrangement. He, like Margaret Atwood, looked to the religious intolerance of the Puritans as an example in fleshing out THE HANDMAID’s TALE world.   Then as to her character, co-star Alexis Bleidel explained, “She’s living with an incredible amount of tension that’s running under every scene.”  Ann Dowd also explained that for her character that, “The core of her choices is that she loves these girls deeply and wants them to succeed.”  Elisabeth added, “Having the ultimate challenge of never being able to speak your mind, for me, that was the challenge.”  She also noted that unfortunately the issue of who controls women’s bodies is a very timely topic in the world we live in right now.  Co-star Joseph Fiennes chief in, “What’s interesting to me is sexual politics as well as the state of our planet.”  He loves Offred’s story of being a survivor as it is “hugely inspirational. . . she finds power in a position of nothingness.”  As to the use of voiceover to narrate what Offred is thinking, Elisabeth said that the voiceover allows her to “hold the viewer’s hand and walk them through this world” and it is important to differentiate between June and Offred.  (Impression:  It is gorgeously filmed, phenomenally cast, and absolutely harrowing to watch.)  THE HANDMAID’S TALE premieres April 26, 2017.

That’s a wrap on the network and studio presentations from Day 3 of the Winter 2017 Television Critics Association Tour.  As a reminder: be sure to mark your calendars for the upcoming new series and specials as you do not want to miss out on the next great TV show that everyone will be talking about.