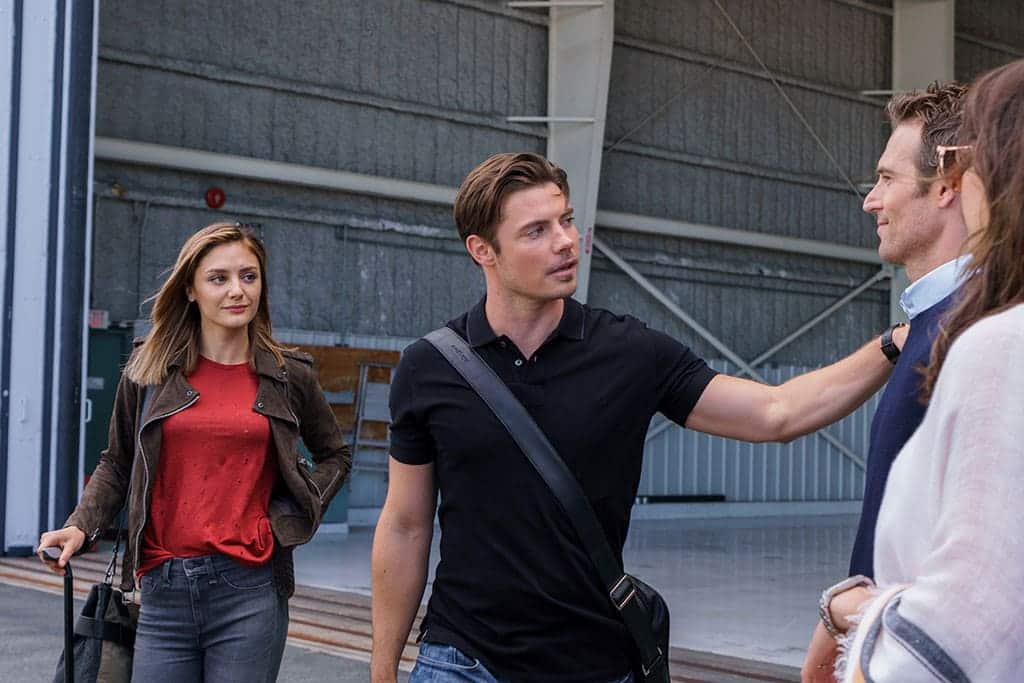 This Winter’s TCA tour included presentations from CNBC, E!, Bravo who presented on the 13th day of the tour.  Here are some of the featured television shows and specials that caught our attention:

THE PARTNER premieres February 28, 2017.
THE DEED premieres March 1, 2017
This has been the third consecutive year of growth in viewership for CNBC.

CNBC’s THE DEED is a reality TV show that turns the spotlight on real estate moguls and investors who come to aid of “flippers” in the real estate world providing cash and expertise to help get a home finished and ready for sale.  Season 1 of THE DEED is eight episodes, 4 episodes  filmed in New Orleans and 4 episodes filmed in Chicago.  Appearing for the panel were: CNBC’s Jim Akerman with hosts/investors Sidney Torres and Sean Conlon.  Sean Conlon said that THE DEED is more realistic and shows the unvarnished part of house-flipping.  He added, “In home flipping, if something can go wrong, it will. You hope for the best but you plan for the worst.” Then Sidney Torres shared that one of the episodes he made a deal with a woman who got in over her head in a multi-million dollar teal estate renovation and how he came to her rescue in THE DEED to make a very lucrative and positive investment deal.  He emphasized that is just one of the stories from the show.  From his perspective, “If I’m going to put my hard earned money into a deal, I gotta see how I’m going to make my money back.”  THE DEED truly is intended to be educational about the reality of house flipping and the unexpected challenges that it presents.  One noteworthy aspect is that the funds invested have to be paid back within 30 days of the episode airing.  THE DEED premieres March 1, 2017 on CNBC.

THE ARRANGEMENT’s tagline is:  “There is no such thing as a Hollywood ending.”  E!’s new drama THE ARRANGEMENT is tale of young actress recruited to be the wife of world famous actor and portrays the complications and twists that arise. E!’s drama THE ARRANGEMENT stars Josh Henderson (DALLAS), Christine Evangelista, Michael Vartan (ALIAS) and Lexa Doig (CONTINUUM, ARROW).  Appearing for the panel were: executive producer Jonathan Abrahams along with stars Josh Henderson, Christine Evangelista, Michael Vartan. Josh Henderson said he was drawn to the story because he “kinda saw this as a truly unique story that takes place in Hollywood.”  Josh described his character Kyle West as being dependent upon Michael Vartan’s character Terrence to guide him through Hollywood life because Terrence is the leader of a self-help organization called the Institute of the Higher Mind. When asked about the invasive paparazzi that hound his character in THE ARRANGEMENT, Josh stated that he has seen first-hand that “you have to check your privacy at the door when you become an actor.”  But even with the paparazzi capturing every moment of Kyle’s life on film, there is a lot to learn about who Kyle West actually is.  Executive producer Jonathan Abrahams said the real story is: who are these people in THE ARRANGEMENT? Kyle and Megan each have secrets that will be revealed.  Jonathan also clarified that the depiction of Institute of the Higher Mind on THE ARRANGEMENT is  deliberately not made out to be are lion.  THE ARRANGEMENT is not faith. It’s really about the Hollywood lifestyle and learning techniques to cope and manage it.  Talking about her character as the young actress Megan put in this unique situation, Christine Evangelista noted that Megan’s motivations are not clear at first:  Is it about love? Does Megan think it is real? Christine is interested to see what the audience’s perception is of Megan.  She explained that in the pivotal scene where Mehgan and Kyle first meet at the audition that Megan’s performance for that audition with Kyle was sp perfect because of the chain of events that Megan goes through right leading up to the audition.  That is not an act for her.  Megan was reacting to what had just happened in her life.  As for costar Michael Vartan, the attraction to his role as Terrence was because it is an opportunity to play someone completely different — someone complicated, creepy, and darker than what he has done in the past.  Michael clarified that, “playing someone a little creepy, for lack of a better word, and darker was really interesting.” When asked if he knew of any arranged marriages in Hollywood, Josh  laughingly said “I think we have all heard the myths and rumors about arranged relationships in entertainment.”  Jonathan added that he has heard stories of contract marriages that date back to the early days of Hollywood and that “he amount of true life stories, rumors, etc. . . . and we could not fit them all into the show.”  He said he is interested in exploring in how do free-thinking people make decisions like this and what are the ramifications of it.  He added, “we aren’t reaching for headlines . .  . it’s how do you normalize this [kind of arranged marriage].” Speaking of what could be perceived as an arranged-marriage, Michael commented that his characters Terrence and his wife Deanna (portrayed by Lexa Doig) have known each other for many years and seem to love each other as much as they can.  However, what truly in behind the curtain gf both the relationships of Kyle/Megan and Terrence/Deanna remains to be discovered as THE ARRANGEMENT unfolds. (Impression:  I watched two episodes of E!’s THE ARRANGEMENT and it is fantastic guilty-pleasure drama. It invites viewers to peak behind curtain  of Hollywood arranged marriages. It is so wicked, sinful, delicious, twisty, and full of dark secrets and back-door deals — and  addictive. One clue I can offer: keep close eye on Michael Vartan and Lexa Doig’s characters. They are master manipulators.)  THE ARRANGEMENT premieres March 5, 2017.

E!’s SO COSMO is a reality series about life inside Cosmopolitan magazine and showcases the actual staff working there, including Chief Content Officer Joanna Coles and staffers Diandra Barnwell and Leah Wyar Romito who appear in the show.  Attending the panel were: executive producer Rob Bagshaw along with Joanna Coles, Diandra Barnwell, Leah Wyar Romito.  SO COSMO’s tagline is: “Discover what is takes to run the empire that defines an industry.”  When asked about the timing of what viewers will actually see, Joanna Coles explained that they work three months ahead of the show, so by the time the episodes air on television, viewers will be able to see everything they were working on at Cosmo as the actual magazine will be available at magazine stands by that time.  Joanna stated that she feels the world is ready for another workplace story particularly as SO COSMO is a uniquely office drama that feels like a family.  Staffer Diandra laughingly added, “We are a super supportive staff, but does not mean we do not go at each other” when the cameras are rolling. She then added, “Having drinks, fun, and balancing your personal life is our demographics for the magazine. . . and, because of Joanna, we have a voice and an opinion and feel empowered.”  She further noted that Cosmopolitan saw itself going from people thinking it was  just a sexual magazine to being an empowerment tool for women.”  Adding to that Joanna said, “when I joined Cosmo in 2012, I was inspired to tackle equal pay, broaden the subject matter beyond bedroom and into boardroom.”  Pointedly Joanna added, “We still don’t have equal pay or equal work for women” and emphasized that in SO COSDMO, “you see these young professionals growing and  learning as they go on” and that in the show “you will see a staff of young ambition women who are now armed with the tools needed to succeed.” She reminded that SO COSMO is “about how you get stuff done, guard your place and get people to like working with you. . . we wanted to make sure that people were shown fairly. . .  and this is really how this industry works.” Joanna finished with stating:  “Cosmo as a brand has relevance in young women’s lives. I’m thrilled for audience to see that.”  SO COSMO premieres February 8, runs 8 episodes on E!.

With the tagline: “Love is the greatest con of all,” Bravo’s new drama series IMPOSTERS is revealing the twisty world of professional con artists who take men and women for every penny they have.  In IMPOSTERS, the con man is actually a woman who successfully seduces and marries a series of unsuspecting men and one woman and then fleeces them for  all their worldly possessions — leaving each devastated, shattered and financially ruined.  But what if all her “marks” figured out how to track her down and make her pay?  Conning or trapping a con artist is tricky and dangerous, but when motivated the game can be ruthlessly deadly.  Appearing for the IMPOSTERS panel were:  executive producers Adam Brooks and Paul Adelstein, along with stars Inbar Levi, Rob Heaps, Parker Young, and Stephen Bishop. Executive producer Adam Brooks said that IMPOSTERS poses the ultimate question of: How well do you really know someone?  In IMPOSTERS, Brooks said that they really were striving to not only surprise the characters, it wants to con the audience too.  Playing the shows femme fatale,  Inbar Lavi said she got incredibly lucky to have been chosen to portray a role that lets her play many character variations.  In IMPOSTERS she gets to portray at least 4 different women, each looking very different and seemingly all different women with vastly different lives and loves.  Co-star Parker Young said that when Inbar’s character she leaves his character or the otters that she has conned, they are all desperately trying to figure out who they without her.  She had completely molded herself into being their perfection life companion that when she is gone, they are uncertain who they are in the aftermath.  As Inbar noted, unfortunately, the aftermath is not pretty and everyone ends up deeply hurt.  It is how each of the conned spouses reacts that sets the show in motion.  In the real world, Inbar said that normally, “You’d brush yourself off. . . and you may find someone who won’t hurt you.”  But in IMPOSTERS, no one is ready to forgive and forget.  No, they decide someone has to pay.  Ironically, Inbar noted that here character Ava doesn’t know who she is yet. Ava is so accustomed to being someone else that she has not yet found her own identity and thinks that lot of people can relate to that. Executive producer Paul Adelstein further explained that Ava’s unique gift is “being that thing the other person needs” in scamming them. The show will be about seeing if they can actually trap Ava and what happens if they do. (Impression: Unbelievably excited about Bravo’s drama series IMPOSTERS, premieres Feb 7th. Woman marries and rips off spouses for everything they have. Twist is the ripped-off spouses team up to track the diabolical con woman down and make her pay.)  IMPOSTERS premieres on February 7, 2017 on Bravo.

That’s a wrap on the network and studio presentations from Day 13 of the Winter 2017 Television Critics Association Tour.  As a reminder: be sure to mark your calendars for the upcoming new series and specials as you do not want to miss out on the next great TV show that everyone will be talking about.