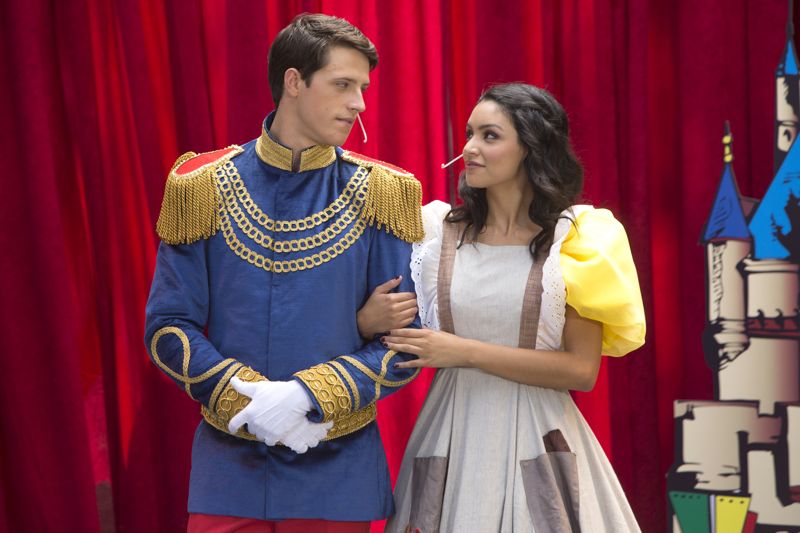 MTV’s newest venture, HAPPYLAND, seems more like an ABC Family series than a program that belongs on the network once home to music videos. The half hour dramedy features much drama, mostly at the hands of an extremely rare situation, one that most viewers will never experience or even meet someone who has experienced. The story seems to be focused on overcoming adversity and is made up of characters who will pull together in heartwarming ways. But there’s an edginess in the premise that ABC Family is still a few years away from reaching, so perhaps that’s why it landed on a network that is OK with being inappropriate a bit more often.

HAPPYLAND takes place at a theme park that is clearly modeled on Disney, given the range of costumed and human characters that work there, though Disney would never license their material for a project like this. We quickly meet Lucy Velez (Bianca A. Santos, The Fosters), a smart teen who wants to escape this empty, near-poverty lifestyle she is following her mother, Elena (Camille Guaty, Prison Break), into at the titular place. This is derailed as she tries to cover for her mother’s mistakes.

Elena herself seems a totally uneven character. She is a bit loose, so that lines up with her teenage pregnancy, but she’s responsible enough that she’s never missed a performance in fifteen years. Yet, she misses one in the pilot, and the park is ready to fire such a long-time, reliable employee for one mistake? And she always show up for work but she has trouble paying the rent on time? I don’t really understand what type of person HAPPYLAND is trying to build with her.

Lucy is easier to figure out, a stock character seen way too many times. She’s a girl who is supposedly independent and strong-willed, but all it takes is one cute guy being nice to her to ruin her willpower. This, despite the fact that the guy exhibits bad tendencies at their first meeting, and shouldn’t be able to make up for things so easily. Lucy also has a weak spot for her mother, but that’s a little more understandable, as many kids will protect and only believe the best about their parents long after being disillusioned out of a desire to restore an earlier balance.

The guy that gets in Lucy’s way in HAPPYLAND is Ian Chandler (Shane Harper, Awkward.), the son of the park’s owner. He is first seen smoking pot in a character costume, and passes out during a show. Yet his abs and gentlemanly conduct when later wearing princely garb knocks down all of Lucy’s defenses. One may assume he is just having a bad day at the beginning, rebelling about getting into the family business like his more responsible brother, Theodore (Ryan Rottman, Gigantic), has done. But it’s hard to tell because Ian has basically no character development in this pilot.

Anyone who has been following along this article the least bit will probably assume that Ian and Lucy are the central couple of HAPPYLAND, and that’s the way it looks as the episode comes to an end. But the twist of the series (and I feel comfortable spoiling it here since it’s been covered extensively in the press) is that the two share a dad, something they don’t find out about until after they kiss. It’s an icky, icky situation.

The first episode ends abruptly with this revelation, so it’s hard to tell were the show will go from there. I tried skimming the second episode sent to press, but it just had the pair fighting with each other, and considering how bad I think this series is, I couldn’t keep going to try to figure out what the equilibrium will end up being, which I don’t think will be settled quickly. Surely, even MTV wouldn’t let (half-?) siblings date for any length of time, so the relationship between Lucy and Ian will have to be one of siblings, not lovers. But that’s not the vibe being put off in the first episode.

While HAPPYLAND’s tale is conceivable, it’s certainly not a set of circumstances viewers will be able to relate to, nor is it ripe for good character study. Instead, it seems offensive purely for the shock factor, and will make a weak premise to drive the show forward. I don’t know where HAPPYLAND is going, but I’m exiting the ride right now before it makes me any more nauseous, which, for the record, is being caused more by the overall poor production than the kiss itself.