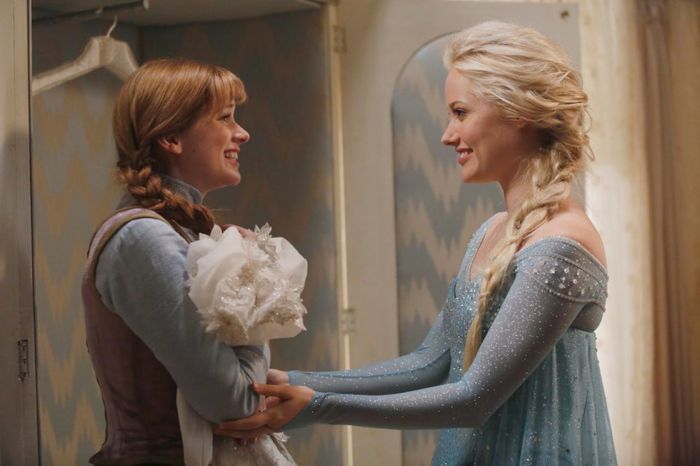 The Season 3 finale of ONCE UPON A TIME saw the defeat of Zelena (Rebecca Mader) and the return of someone who warmed a few hearts and froze others: Maid Marian (Christy Laing), Robin’s long lost wife.  Robin (Sean Maguire) and his son are naturally elated to see Marian, who they thought was dead.  Regina (Lana Parrilla), on the other hand, knows that the second Marian appeared that her hoped for “happy ending” has gone up in a puff of smoke and there will be no “happy ending” for the Evil Queen after all.

So Season 4 will not only introduce Elsa (Georgina Haig), Anna (Elizabeth Lail) and Kristoff (Scott Michael Foster) to ONCE UPON A TIME, it will also look at whether a “happy ending” is something that is only for heroes and not villains.  For it is Regina’s eternal curse that the moment happiness is within her grasp, it is always snatched away from her. Naturally, Henry (Jared Gilmore) and Emma (Jennifer Morrison) fear that without the promise of a “happy ending” that Regina will return to her evil ways and become the Evil Queen once more.

While Regina will wrestle with the dual natures fighting for supremacy in her soul, there is another threat looming on Storybrooke’s horizon: the arrival of Esla, the villainess-turned-heroine of the Disney film “Frozen.”  Just what has drawn Esla to Storybrooke and why is she unleashing her icy rage upon them?  There is a mystery as to what provoked the Ice Queen and brought her so far from home.  But before the Storybrooke residents can figure out why Elsa has come to visit, they will have to get close enough to talk with her and Elsa is not exactly approachable with her icy, protective shell of ice surrounding her.

Besides Regina’s struggle for her own happiness and the surprise visit by Elsa, what else does Season 4 of ONCE UPON A TIME have to offer?  Fans will be delighted by the return of romance.  After the surprise honeymoon of Gold (Robert Carlyle) and Belle (Emilie de Ravin) in Season 3, fans can look forward to a wedding and a special dance for them.  Hook (Colin O’Donoghue) and Emma also try to assess where their relationship is headed and to see if their undeniable attraction can be turned into a long-lasting “happy ending” for the both of them.  As for Regina and Robin, that Outlaw Queen romance may be on hold as Robin sorts out his marital situation.  He still loves his wife, but he loves Regina too.  So what is an Outlaw to do when there are two strong women vying for his heart? Speaking of romance, one dare not forget the epic romance between Anna and Kristoff either as it will certainly have a big part to play this season as well.

Yet even with the dream ONCE UPON A TIME romances heating up, the darker natures of some of our heroes will still add a few wrinkles to the expected happily-ever-afters.  Gold just cannot help himself with that dagger and he has the odd habit of acquiring and stumbling across other objects that may pose other dangerous threats as well.   The temptation to dabble with darkness is too strong for him and it will be a test of Belle’s love to see if she can keep Gold from straying too far down a dark path this season.

One of the bigger questions raised this season will be: can you turn back time?  It was a question raised by Zelena in Season 3, but she grand plan to restart the clock on her tortured life was fortunately derailed before she could implement it.  But with Regina and Gold both itching to see how their powers may grant their hearts’ greatest desires — to reconnect with loved ones – will one or both finish what Zelena started?  Elsa just may have a part to play in that too as she is on the hunt for something, or better yet, someone.

Season 4 promises to be a season of lurking dangers, looming threats and hidden desires.  Just which will strike first?  Be on the lookout for those you may trust the most.

ONCE UPON A TIME returns with its Season 4 premiere on Sunday, September 28th at 8:00 p.m. on ABC.  Just how do you melt a frozen heart?