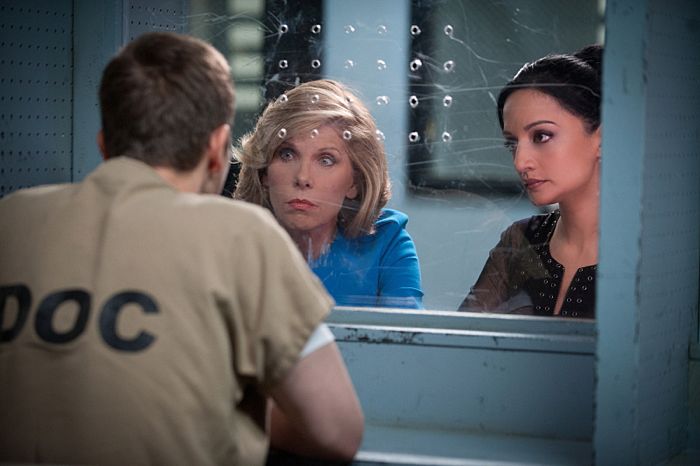 Florrick, Agos, & Associates, one of the law firms at the center of THE GOOD WIFE is quite messy right now. I guess that’s why, as this week’s episode title suggests, some are having “Trust Issues” with the company. With a named partner in jail, a couple of big clients become hard to hold onto, even while the staff is about to expand greatly, with some very good lawyers joining up. One wonders how this will all shake down, given the show’s penchant for not playing it safe, making stability a true uncertainty.

First, there’s Cary’s (Matt Czuchry) case. Despite a tape suggesting Cary’s guilt, he insists he never directly told clients how to do illegal things, meaning the tape is likely edited. The problem is, Kalinda (Archie Panjabi) can’t investigate because the firm’s drug kingpin client, Lemond Bishop (Mike Colter), will hurt someone and take his much-needed business away if she does. And when he does allow her to talk to some of his crew, supervised, she then has to make a decision to protect Cary’s case and condemn someone to death, or tell the truth and leave Cary locked up.

One guesses Kalinda will probably tell Bishop whom his mole is. We don’t see that in “Trust Issues,” but Kalinda’s OK with moral ambiguity, and she cares about Cary, who clearly isn’t doing well in jail. While Cary would never choose to let a person die for his freedom, Kalinda doesn’t have the same qualms. The question is, though, once Cary is out and knows what Kalinda has done, and that Kalinda is now an employee of his that he can’t fire, how will it change their relationship? This is sure to be an ongoing problem with far-reaching consequences.

At the same time Bishop is threatening to pull out, Deena Lampard (Megan Ketch), who has a considerable say in Chumhum’s future, is also losing faith in her team. Cary is supposed to be handling things for her, and Alicia (Julianna Margulies) and Carey Zepps (Ben Rappaport) have to try to step into an ugly class action. They manage to pull it off and she’s satisfied for now, but they also expose something Deena would rather keep secret, and her confidence in the firm is surely shaken. Without Chumhum, there may be no Florrick, Agos, so her continued happiness is vital.

Into all of this come the newbies. Diane (Christine Baranski), voted in as new named partner against Cary’s wishes, asks a mentee at her old organization, Dean Levine-Wilkins (Taye Diggs, Private Practice), to come along. He is skeptical at first, visiting Florrick, Agos’ under-construction offices and seeing scrambling to cover for Cary, but Diane’s insistence that there is promise here prompts him to not only join up, but bring along six department heads.

This many veterans will definitely change the way business is done at the startup, and not everyone is going to like that. Many of the founding members left to escape the big firm and its stifling practices. Now, those former bosses have followed, and Dean, at least, has been told he can help direct the new business. I assume Dean is a good man or Diane would never have told him her secret before the move. But it still makes me extremely uneasy, again, mostly because of Cary’s lack of involvement in these decisions. There will be drama here.

“Trust Issues” doesn’t show how Cary reacts to all this yet, but he is out of jail and the episode ends with him giving Alicia a hug, a first for THE GOOD WIFE. These two have been through so much together, and it’s a testament to their continued bond that they hug. This is after Cary knows Diane has been voted in, but perhaps before learning of Dean and the others. Will that knowledge change things? Or does Cary know Alicia has the firm’s best interests at heart, even when he disagrees with her? Even if the relationship goes sour, it’s nice to see this moment now.

Will Alicia stick with this firm she, more than anyone, has created? The pressure mounts for her to run for State’s Attorney, mostly because of Eli (Alan Cumming) pulling strings behind her back. He even has Valerie Jarrett (herself, a good cameo get, but not a great actress) call Alicia! Alicia is insistent that she will not get involved in politics, but as this plot keeps coming back over and over again, and we know that Eli is good at his job, one wonders if he might finally find a way to get her to break. And if she does leave Cary with the things she has done against his will, will he resent her for it? He certainly would have a right to.
Coming back to Diane, there is a beautiful scene in “Trust Issues” when she, Dean, and the others leave her former company. She steps into the elevator and whispers goodbye. There is a real sense of finality here. Diane is the last original main character left in this place, and her departure closes the door on the law firm that had been THE GOOD WIFE’s main setting for a very long time. David Lee (Zach Grenier), who was promoted to main character last season, remains behind, which implies that there could still be story left for Lockhart, Gardner, Canning. But it’ll never be the same, and for now, it feels more like an evil place than the warm home fans remember.

THE GOOD WIFE is excellent for its continued bold storytelling and its interesting characters, who have very different personalities, causing drama and strife even when no one is at fault. It’s an intense series, with many weeks seeing major developments, and an ongoing serial that is as engaging as anything on the broadcast networks. I continue to find it among the very best on the Big Four, and am glad it has managed to not only maintain quality, but get better with age.