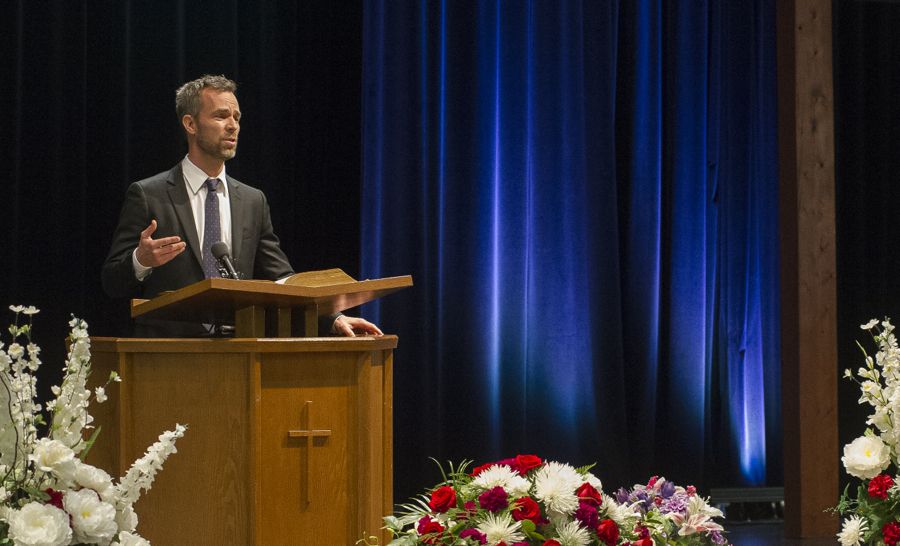 Teen Wolf star JR Bourne took a break from hunting monsters to star in the Lifetime original movie The Preacher’s Sin premiering Saturday, November 14 at 8PM EST. In the film, Bourne plays Evan Tanner, a preacher whose career is on the rise thanks to a book deal and his national radio show. His life is far from picture perfect though. With a troubled 17-year-old niece at home and a newfound son he didn’t know existed, Evan’s life becomes increasingly complicated as pressure from his tyrannical boss to present himself as the perfect preacher tests both Evan’s family and his faith.

Bourne recently chatted with Seat42F about playing the grounded character of Evan, the movie’s stance on bullying, and what he enjoys most about being a genre TV staple. Read on for Bourne’s take on what it was like to play against type in The Preacher’s Sin and much more.

What drew you to The Preacher’s Sin?

Bourne: Initially it was because I tend to play the guys who are either supernatural or into drugs, alcohol, or abuse and this man wasn’t any of that. He was more of an everyday guy and I loved that. I loved what the whole story was saying. Not just his issues, but also his niece’s and his wife’s and his daughter'[s. There’s something being said about so many issues that are relevant right now.

Do you think there are any similarities between you and your character Evan?

Bourne: The bigger discussion we’ve been having about the movie is that I don’t think there’s anything that different about any of us. It’s interesting to look at these guys because we all are sort of dealing with the same things in whatever package they come in, whether it is drugs or it’s a supernatural being, we’re all struggling with something. That’s what I enjoy to just see and watch and share.

There’s a big business side to religion now and the movie seems to touch on that, but ultimately Evan’s faith felt very real. Do you think the movie was commenting on the business of faith versus the beauty of faith?

Bourne: I don’t know if I can speak for the writer – I shouldn’t, I think, about what the overall message was. Do I think it has all become a little too business like? That might be the overall problem with not just religion, but everything. It all becomes a business eventually and it all becomes driven by the wrong impetus.

What was the atmosphere like on set? This is a somber film; did you guys have any laughs?

Bourne: We did. We had a great time. We had a great cast and our director Michelle [Mower] was phenomenal. The producers were great. Even the tougher scenes and tougher days – it was an enjoyable time, we had a lot of fun.

Did you find it hard to play the more emotional scenes?

Bourne: No. I guess that’s our jobs as storytellers, right? As audience members as well: we’re supposed to be brave enough to delve into those things we normally don’t want to deal with. That’s including myself. We go and we watch movies and TV shows and read books and go look at paintings and art to help us deal with those things we don’t want to deal with in our lives. So no, I don’t shy away from that.

You’ve done a lot of awesome sci-fi and fantasy work in shows like Teen Wolf and Arrow. How does that work compare to something like The Preacher’s Sin?

Bourne: I don’t differentiate them. I remember when I was starting Stargate, it was maybe the third or fourth episode I did when it dawned on me that I was on a spaceship traveling to another planet on another world in another dimension. I’m on a sci-fi show, this is amazing! It was my dream growing up as a kid watching Star Trek with my dad, so I don’t differentiate them.

With Teen Wolf and Arrow and all of them it is something that is real. That’s one of the keys to the success of those shows, Teen Wolf specifically, that as supernatural as everything that is going on around us is, we’re dealing with real issues. It’s loaded with this other stuff – creatures, werewolves, berserkers – but at the core what Scott and Argent are dealing with is the same sort of stuff any teenager or father is dealing with.

Are you excited for your fans to see you in The Preacher’s Sin?

It was wonderful to see the movie tackle the topic of bullying. It is such a relevant issue right now and it was interesting the way the movie approaches it. Bullying can continue into adulthood and we seem to see that with Evan and his boss. Do you agree?

Bourne: Absolutely. I think it is beyond a current issue and it hasn’t really changed. It has almost gotten worse because of social media. Social media is a beautiful sort of addition to society in the sense that we can be in touch with our fans all over the world, and I love that, but at the same time it opens up these other sorts of things. That’s the yin and yang, the good and bad of everything.

I have no tolerance for bullying. I think it is important that bullying is covered in this movie and depression as well.

If you could star on any show, past or present, what show would it be and why?

Do you have any projects coming up you can tease a bit?

Bourne: Well, I have Teen Wolf, the second part to our Season 5 will premiere in January. Spoilers for that…well, I mean, I don’t even know what is happening with Argent. We get told almost the day of. It’s going to be an amazing season, I know that for sure.

What is it like to be part of a project like Teen Wolf that has such a passionate fanbase?

Bourne: It is absolutely incredible. We get to do these conventions and meet the fans face to face and that is my favorite aspect of working on this show. We have Twitter and Instagram and all these ways on social media to interact with the fans on a daily basis, but to go to those conventions and meet them face to face always surprises me and I feel honored to be a part of something that is so moving to people and effects them and influences them. I am beyond grateful to the fans, they really are quite wonderful.

Watch Bourne in The Preacher’s Sin this Saturday, November 14 at 8PM on Lifetime.