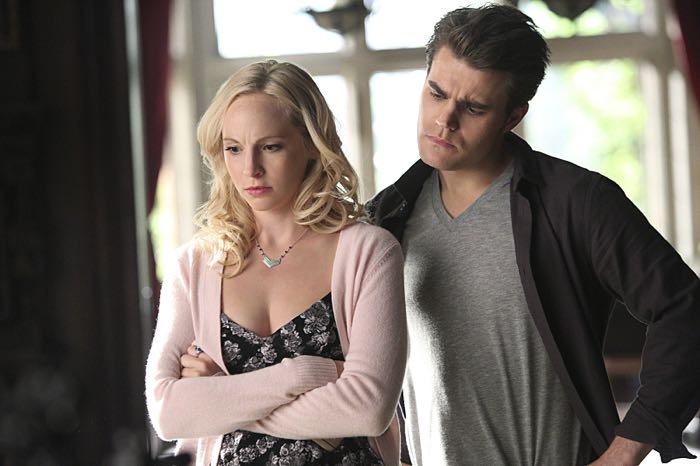 With mommy-dearest Lily Salvatore (Annie Wersching) back in Mystic Falls and her family of Heretics in tow, not to mention the newly found Julian (Todd Lasance) and newly resurrected Jo (Jodi Lyn O’Keefe) — who is not really Jo and is someone they do not even know yet – life in THE VAMPIRE DIARIES has taken a sharp turn into the unknown. With Elena (Nina Dobrev) quietly resting until she can be returned to the land of the living after Bonnie (Kat Graham) departs this Earth, it seems like there is a whole new world of vampires and family members to get to know and they are wreaking havoc in the lives of our heroes: Stefan (Paul Wesley), Damon (Ian Somerhalder), Alaric (Matt Davis), Caroline (Candice King), Bonnie, and Matt (Zach Roerig). They are not even welcome in their own homes or home town anymore, all of which they gave up in order to call a truce with Lily and her Heretic “children” – Beau (Jaiden Kane), Valerie (Elizabeth Blackmore), Mary Louise (Teressa Liane), Nora (Scarlett Byrne), Oscar (Tim Kang) and the now deceased Malcolm (Justice Leak).

So just what does Season 7 hold in store for our heroes now that they have been uprooted from their homes? Flash-forwards have provided glimpses of each’s future, which is reassuring in that we know that they are alive and well 3 years from the present. But it is also alarming as we find each in such dramatically different places in their lives: Damon in a coffin, Stefan on the run, Caroline engaged, Alaric with twins and do not even get me started on the Bonnie/Enzo (Michael Malarkey) romance!

It boggles the mind even to think about what drove each of our heroes to those points in their lives in three short years. Hoping to get a few more answers, our reporter visited the set of THE VAMPIRE DIARIES to find out what clues and teasers the cast could share.

Candice King talks about the ripple-effects of Valerie’s revelation that she had been pregnant with Stefan’s child and the surprising friendship that arises between Caroline and Valerie, as well as how Stefan and Caroline try to pursue their relationship in the midst of all the obstacles this season. As to the mystery of who is Caroline’s future fiancé, Candice shares her excitement about when she figured it out. She also comments on the effect of social media on both her life and on the fictional lives of the characters, in particular the Caroline and Klaus (Joseph Morgan) romantic pairing. She laughing talks about the small changes made to accommodate her personal pregnancy while filming this season. As far as Julian, Lily and those Heretics, she provides a few teasers and pretty much puts the nail in the Caroline/Enzo friendship after his unwise alignment with the Heretics. A few fun things to look forward to include the upcoming holiday episode (lots of snow!) and Caroline and Stefan’s official first date and whether Valerie’s reappearance throws a wrench into that romance.

Paul Wesley also talks about the Stefan/Caroline romance and the role Valerie plays in Stefan’s life now that she is back. Paul also happily shared that he is directing two of the upcoming episodes (Episodes 7 and 11) this season and how exciting that experience is. As for the dreaded dinner party with Lily and Julian, things are not going to go well. There will also be some insightful flash-backs coming up that will reveal just why Lily is so drawn to Julian and the abuse she suffered married to Stefan and Damon’s father. Paul is quite pleased that Stefan’s journey this season is a return to the Stefan of Season 1, where he gets to be the full-blown hero. He is also enjoying the complexity of the Stefan and Damon brother-relationship and how it has taken center stage this season. But do not despair, there is definitely more romance ahead for Stefan and Caroline!

Ian Somerhalder talks about how the Salvatore brothers have differing ideas on how to deal with their mother and her boyfriend Julian. Fortunately, Bonnie is very much in Damon’s corner and is ready for the good fight up against the Heretics. Ian knew that with the loss of Elena’s story on the show would be a big challenge, but is pleased that it has opened the door to exploring the story of Damon, Stefan, Lily and the Heretics. All that along with the upcoming winter season has added an extra layer of flair and harshness to the show to make it more dramatic and real. Ian, like Paul, is ecstatic to be directing again this season and fans will be delighted to learn when that episode airs. Alas, Damon’s tormented and tortured journey is nowhere close to being resolved. Ian even ruefully admits that Damon makes the worst decisions, many of which come back to haunt him. But the good news is that out of all that pain comes an even stronger bond between Damon and Stefan. The brothers have grown and learned to rely on each other even more than before. It has made them closer and stronger as a result. Ian is also happy that the show has returned to a funnier, edgier, sexier and darker note this season. He feels it only adds to the appeal of the show.

Kat Graham talks about Bonnie and Damon’s revenge plan and how excited she is about the upcoming flash-back episode where Ian does some of his finest work. She also teased that there is a lot more coming with the Phoenix Stone and that another villain will soon be revealed tied to the Phoenix Stone. As for what’s up with Bonnie and Enzo, next week’s episode is a huge Bonnie and Enzo episode that will give a glimmer into how that relationship may blossom to the point where we see them 3 years in the future. Kat is thrilled that the show took Bonnie to a place where she is nearly in a mental hospital in the future. “Girl Interrupted” is one of her favorite films and getting to play into that has been an incredible experience for her. Kat also talks about how the time in the prison world with Damon really affected Bonnie and how Bonnie took on some of Damon’s humor and fearlessness and badass-ness as a result of it. Interestingly enough, another person who has a significant part to play in Bonnie’s story this season is Nora. Friend or foe, we will just have to see though!

To see where the Stefan and Caroline romance takes a detour, how it is ever possible that Enzo and Bonnie end up together, just who is Caroline’s mysterious fiancé, and what finally convinces Damon to put himself in a coffin and wait for the love of his life Elena, be sure to tune in for all new episodes of THE VAMPIRE DIARIES on Thursday nights at 8:00 p.m. on the CW.