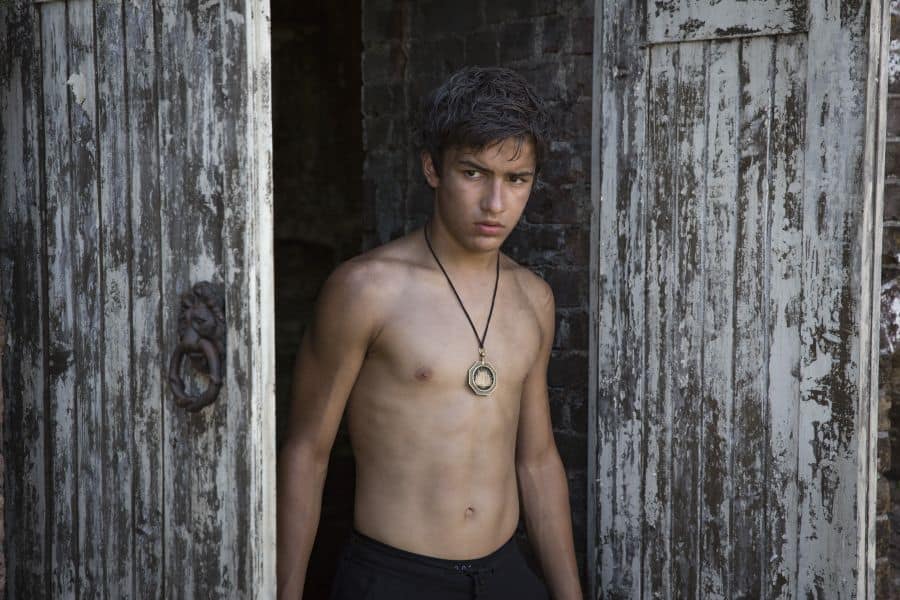 Making its big debut on AMC, the new martial arts drama INTO THE BADLANDS invites viewers into a post-apocalyptic world where feuding warlords have taken control and have ferocious battles to preserve their territories or to stake new claims.  In the midst of those battles and skirmishes, two key characters arise: Sunny (Daniel Wu) and his young protege M.K. (Aramis Knight) who seek not only to end the constant battles and warlord feuds, but who also are in search of a greater quest.

In an exclusive interview, star Aramis Knight talked about this intense, highly-physical role and teased a bit about the complex and mysterious relationships his character M.K. has with Sunny and a few other key characters.

What initially drew you to the role of M.K. and this particular show?
ARAMIS:  [Laughs] Other than the fact that show is badass itself?  I think it is revolutionary in a lot of ways, not just ’cause it has martial arts, but because it has two Asian leads, which has not really been done a lot on TV.  The show also has a great balance between the drama and the action.  One would think a martial arts show would be just action, but the action carries the drama and the drama carries the action.  They both make the storyline unique.

With M.K. in the midst of all the action are you doing all the martial arts too?
ARAMIS:  Yes, definitely.  They put us through a training boot-camp before we even started filming. So we got pretty good at what we were doing.  We were working 8 hours a day for 7 weeks straight.  So you can imagine how much work we got in.  They trained us in hand-to-hand combat.  They trained us to use weapons.  I was trained in a lot of acrobatics, such as flipping and cartwheels and things like that — and you really develop a style that is unique.  I was not able to do all of my stunts, but I did pretty much 75% of them.

Did you have any idea that the role would be so physical when you accepted the role?
ARAMIS:  I knew it was going to be super physical.  I think that was one of the most intimidating things coming in.  I’ve been in the business for a long time now, so when I got onto a new set or I begin working for a new project, I don’t really feel intimidated.  But for this one, I did because I knew there was a lot that was going to be asked of me physically.  Now looking at it, I’m sort of thankful because I’ve always been very in touch with my athletic side.  I have played basketball since I was a little kid. So I’m into changing my body and to becoming stronger and faster — and I definitely did that for this show.  It is nice to integrated my athletic side into my job.

Do you have any particular factor things that you have learned from working on INTO THE BADLANDS?
ARAMIS:  We sort of developed all different types of techniques.  They wanted all different types of fighters because no martial artist is the same.  So we sort of developed a street-like style for M.K. because at the beginning of the show, he had no training at all and throughout he begins training.  So we developed a street-like fighting that isn’t always so crisp and it isn’t always so perfect and swift.  But we wanted to see the raw power of a teenage boy like M.K.  He has such a special power and we wanted to see all of that, but without making it too perfect.

Was there anything you were asked to do that you were like, “I can’t believe I’m being asked to do that!”?
ARAMIS:  Yeah, some of it was intimidating and I pushed myself to the limits a lot.  I am normally a pretty good judge of things of things I can’t do and there were certain things where I’d say, “I think we should change this or I would be more comfortable with this,” and they really worked with my skills and my strength.  There were a couple of things that I am surprised that they did ask me to do and that I ended up doing and I was really proud of myself for doing them.  You will see in the very first episode some of the extremely difficult stunts they had me doing.

Who is M.K.? How do you describe him?
ARAMIS:  In this show, there is no real protagonist or antagonist.  I think that is something that is beautiful about this show — that people are going to develop their own opinion on who they agree with — whether it is the Widow (Emily Beecham), whether it is Quinn (Marton Csokas), whether it is Jacobee (Edi Gathegi), whether is Sunny (Daniel Wu), whether it is Bale (Benjamin Papac) or Tilda (Ally Ioannides).  They will be able to choose their side.  I think M.K. is the only form of any purity in the show because coming in, he is not used to the daily grind of the badlands.  Killing is not a norm for him.  So M.K. is the only pure anything on the show.  He is sort of ignorant to the world and he learns so much about himself.  I think people are going to love going on his emotional journey.

What is the one quality you most admire about him?
ARAMIS:  I really admired his ability to stand up for what he believes in.  There is so many times where he pushes boundaries just to stand up for what he believes and to get what he wants.  Also, he is so driven and so ambitious.  I really appreciate that, and he is very loyal as well and that is always something that is a good trait to have.

What have you learned from playing the character of M.K. so far?
ARAMIS:  It has given me a lot of confidence to know that I can lead a project and to be given more creative rein than I have ever been given before this show. I was on set every single day and I was working really hard and I was really given a sense of what I can and cannot do.  And just having creative say in what I was doing, it allowed me to take control of my own performances and, even with storylines, they allowed me to put a little bit of myself into it in a lot of ways.

What was it like working with Daniel Wu?
ARAMIS:  Working with Daniel is great.  During training, one thing that he and I wanted to develop was the Karate Kid/Miyagi relationship because we are like the dynamic-duo of the show and it’s not like in real life.  So he and I developed a real strong relationship off-screen and I think it definitely played on-screen.  [Laughs] And I know I’m obligated to say that, but it is actually true. Daniel and I became very, very close.  He was very much like a father-figure to me on set.

What is Sunny and M.K.’s interactions like?
ARAMIS:  One thing I like about Sunny and M.K. is that a lot of times, they are the are comic-relief on the show.  It’s fun to see this kid M.K. coming in and testing limits with this bad-ass killer and a lot of times it is very funny.  But, also, we are the only two characters on the show that actually trust each other and really need each other.  They need each other to reach their final goal.  I think people are going to love seeing us work together.

Where does Madeleine Mantock’s character Veil come in?
ARAMIS:  Madeleine plays Veil and Veil is sort of the big thing that makes Sunny feel like the badlands are not the place for him and makes him second guess everything.  Madeleine and my characters develop a special relationship throughout the show — she very much becomes like mother-figure.  But people will have to watch it. It’s a bit later and I don’t want to give anything away.

What would you like viewers to know about the show?
ARAMIS:  I think in the first 6 episodes, the show develops in a lot of ways.  It’s very oriented around creating the world for people.  But as the series goes on, there is sort of a spirituality that is developing and there is a real emotional journey that you see my character M.K. and Sunny go through.  I think that is going to be really interesting for people to watch and see them evolve.

As you have inhabited this world for a bit working on the show is there something you really appreciate about the world they are trying to create?
ARAMIS:  One of my favorite things about the show is that they did a very good job making all of the different characters have a lot of contrast.  So you know when you’re in the lodge or you know when you’re in the fort, and also the fighting styles.  They made the fighting styles really unique between the Widow, between Quinn, between M.K., between Tilda.  I definitely think also there are so many different visual themes.  In the beginning, steampunk was very loosely thrown around, then western sort of came into play and also oriental style, and then New Orleans played in really huge as well.  It is like a big hybrid of cool themes.  It is unlike anything else.

What kinds of teasers can you offer about what viewers can look forward to?
ARAMIS:  As the series progresses, two people you think would never be in battle, end up in battle. [Laughs] And that’s all I’m going to say!

To find out just what journey M.K. and Sunny have embarked upon and whether they will survive through all the incredible and dangerous obstacles, be sure to tune in for the premiere of INTO THE BADLANDS on Sunday, November 15th at 10:00 p.m. on AMC.