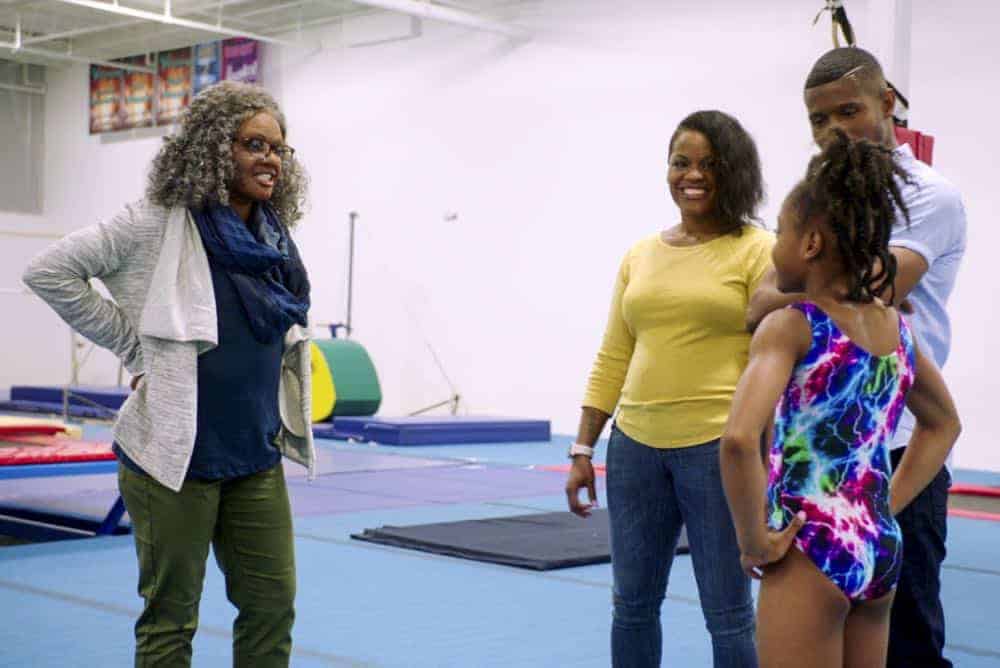 “Gabby Douglas” – Three-time Olympic gold medal gymnast Gabby Douglas springs into undercover mode to discover gifted gymnasts and coaches, on the series premiere of UNDERCOVER BOSS: CELEBRITY EDITION, Friday, May 11 (8:00-9:00 PM, ET/PT) on the CBS Television Network. While disguised as a middle- aged aspiring gym owner, Douglas finds two incredibly talented child gymnasts and interacts with a class of young gymnastics students, none of whom realize that their hero has secretly tumbled her way into their lives.

Douglas first gained national acclaim as an invaluable member of the gold-winning American team at the 2011 World Championship in Tokyo, Japan. As a member of the “Fierce Five” U.S. national women’s gymnastics team at the 2012 Olympic Games in London, the multi-talented artistic gymnast won the team gold medal and individual all-around gold medal. She made history by becoming the first woman of color of any nationality to win the Olympic individual all-around gold in gymnastics, and she was the first U.S. woman to win a team gold and all-around gold in the same Olympics. Douglas also made history by becoming the first U.S. reigning Olympic all-around gold medalist to return to a second World Championship in 2015 and win the all-around silver medal. At the 2016 Olympic Games in Rio de Janeiro, she became the first U.S. all-around Olympic gymnastic champion to compete in a second Olympics and win another team gold medal.

Her numerous awards and recognitions include being named one of Barbara Walters’ “10 Most Fascinating People” in 2012, as well as the 2012 AP Female Athlete of the Year and Women’s Sport Foundation Sportswoman of the Year, and she has been featured on the covers of an array of magazines, such as TIME, People, Essence, Teen Vogue and Success. Additionally, in 2016 Mattel created the bestselling Gabby Douglas Barbie® Doll. Douglas continues to travel throughout the U.S., participating in various panels and speaking at colleges, universities, schools, youth groups and corporate company events.

In 2014 Douglas executive produced and made a cameo appearance in the opening of “The Gabby Douglas Story,” a Lifetime biopic about her fascinating rise and her family’s struggle to overcome obstacles. She was also an executive producer of “Douglas Family Gold,” a docuseries on the Oxygen Channel which followed her family during her journey to the 2016 Rio Olympics. Douglas played herself in the children’s series “Kickin’ It,” and she guest-starred in “The Vampire Diaries” and “Nicky, Ricky, Dicky & Dawn,” among others. She was a judge for the 2016 Miss America pageant, a Season 10 judge on “So You Think You Can Dance” and a co-host for a season of “America’s Got Talent.”

In 2016 she debuted her entrepreneurial skills, launching her Gabbymoji app, an emoji in Gabby’s likeness, for iTunes and Google Play. In 2017 she released her own line of lip color products (under the name “Lip Whips”) in collaboration with Beauty Bakerie.

After being a target of online bullying, in 2016 Douglas began participating in AT&T’s “Later Haters” campaign, working to inspire teens to be more aware of their online actions and drown out haters with more positivity. The same year, she announced on “Good Morning America” that she was becoming the first Change Ambassador of Hack Harassment, a collaborative initiative launched by Intel, Vox Media, Recode and Born This Way Foundation with the goal of reducing the frequency and prevalence of online harassment.