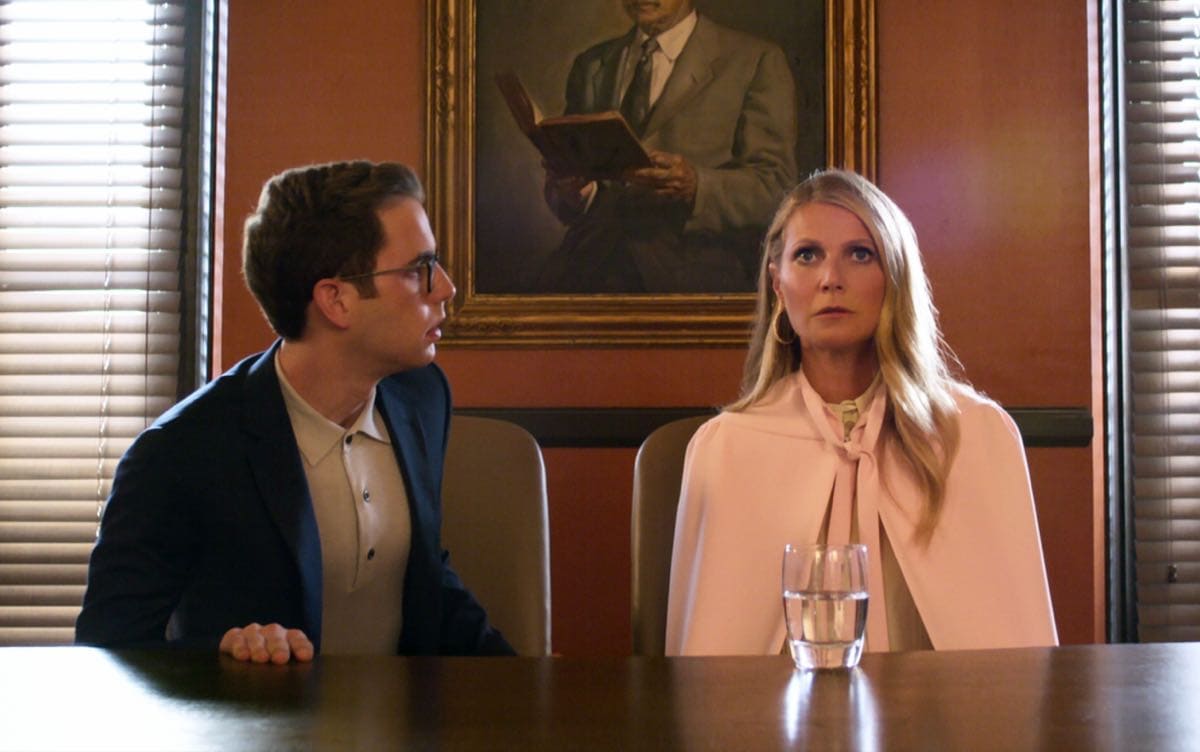 Ryan Murphy, Brad Falchuk, and Ian Brennan, the minds behind FOX’s former shows Glee and Scream Queens, have re-teamed for a new Netflix drama entitled THE POLITICIAN. Like their previous efforts, this one centers on young people who act in hyperreal ways, working hard towards single-minded goals with little regard for who they hurt. These kids act like unscrupulous adults, but the show doesn’t prove they aren’t, instead existing within the high stakes laid out by the protagonists, no tongue in cheek wink that the real world will make this all seem trivial in retrospect.

There is a particular style and tone to THE POLITICIAN. Murphy and Falchuk work with high production concepts in American Horror Story, Pose, and their other television series. But this one is a bit different. It’s more like a Wes Anderson flick than their usual work, down to the young, precocious male lead, characters standing stock still in specific places, and the occasional shot of a furniture description page. THE POLITICIAN’s characters aren’t as odd as those in an Anderson work, and it can sometimes take a viewer out of the story here. But overall, it’s mostly a quality work.

Ben Platt (Pitch Perfect) stars as Payton Hobart. Adopted by the ultra-wealthy Georgina (Gwyneth Paltrow, Avengers) and Keaton (Bob Balaban, Gosford Park), Payton feels less valued than his parents’ biological twins, Martin and Luther (Trevor and Trey Eason). Perhaps to make himself noticed, Payton makes it his mission in life to become president of the United States. His immediate focus: win the presidency of his student body. Which is easier said than done with pretty boy and popular kid River Barkley (David Corenswet, Moe & Jerryweather) standing in his way.

There are others involved, of course. Payton wants cancer patient Infinity Jackson (Zoey Deutch, Ringer) as his running mate to get the sympathy vote, not being aware of what Infinity’s Aunt Dusty (Jessica Lange, American Horror Story) is up to. River’s girlfriend, Astrid (Lucy Boynton, Gypsy), is a serious impediment, and Payton’s girlfriend, Alice (Julia Schlaepfer, Charlie Says), might be one, too. Payton’s advisors, McAfee (Laura Dreyfuss, Glee) and James (Theo Germaine, Adam), don’t always see eye to eye.

Yes, Payton has advisors. The election is treated almost as seriously as an adult campaign would be, and the stakes are just as high if Payton wants to achieve his dreams.

Platt is perfectly cast, playing a role so close to his Tony-winning turn in Evan Hanson. There’s even a dead guy and a crisis of conscience for him to play off of. The rest of the cast seem similarly well suited to their roles.

If I have one complaint about THE POLITICIAN, it’s that it seems very convoluted. There’s a lot going on, and circumstances change quickly with each new twist, of which there are many. Plenty of small moving parts could blow up and derail things at any time. However, other Murphy projects have been similarly dense and came out pretty well, so I think it’s best to have patience and wait. Besides, the character study of Payton seems rich on its own, at least from the first couple of episodes, and may be worth it even if the overall plot is less than satisfying, as has been the case on a couple of seasons of American Horror Story.

If you like Ryan Murphy and flair, you’ll probably like THE POLITICIAN. If you don’t like his other work, don’t expect anything too different here. Not that Murphy is one-note by any means, but he does what he does very well, and this is another variation on those themes.

THE POLITICIAN’s eight-episode first season is available now on Netflix.