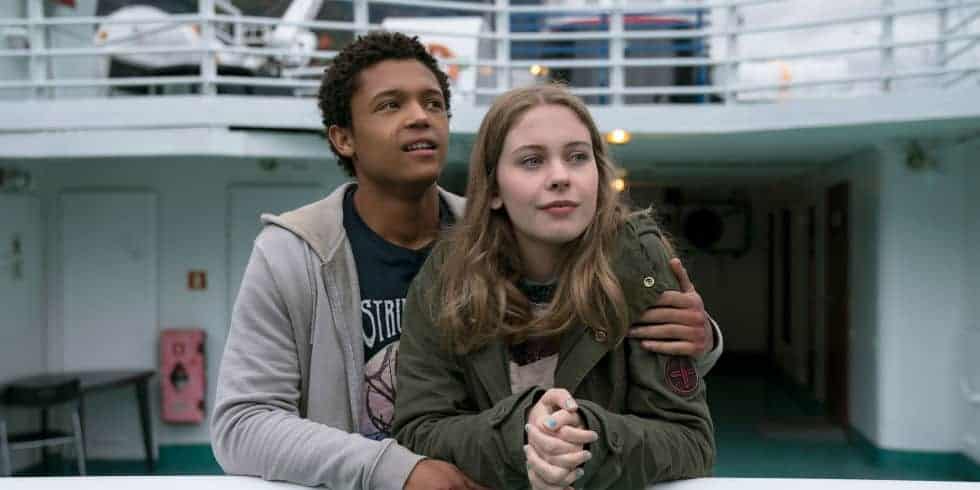 The following contains spoilers from the first episode and less spoiler-y comments on hours two and three.

It seems like Netflix is constantly putting out new shows these days. One of the latest, which arrived last week, is THE INNOCENTS. Two teenagers, one feeling put upon by her single father, the other saddled with being a caretaker to his, run away together. However, the girl has a secret that even she doesn’t know, an inheritance from the mother that abandoned her. As this hidden skill comes to light, it won’t just be their families trying to track them down.

Sorcha Groundsell (Clique) stars in THE INNOCENTS as June, the girl who can shapeshift into other people. June doesn’t know how to control the power, it just happens suddenly one day, throwing her life into disarray. Sorcha does an excellent job playing the scared teen believably, as earnest in her desperation and need for reassurance as she is able to let loose when the situation presents itself.

Her leading man is Percelle Ascott (Wizards vs. Aliens) who plays Harry. It might be hard to believe that Harry stands by his girlfriend when she changes into a man and doesn’t know it’s only a temporary shift. But we’ve already seen Harry put his own welfare second to others, falling very easily into the role of caretaker, so it makes sense. His deep love for her is well demonstrated before this moment.

In the rest of the ensemble of THE INNOCENTS, there are several other actors of note. Viewers are likely to recognize Guy Pearce (When We Rise) as Halvorson, the scientist who is caring for (keeping captive?) June’s mother in scenes that very nearly smack of the Strange Things laboratory, except in the country. Sam Hazeldine (Resurrection) has a tough job playing a character we’re conditioned not to like who really doesn’t seem all that bad. Johannes Haukur Johannesson (Game of Thrones) steals the show, not so much as Steinar, Halvorson’s operative, but as June during her extended shift into him.

The tone is, at times, creepy, but it’s also very grounded and authentic. The kids act like kids, and the parents act like parents, a testament to both the writing and performances. The settings are gone through quickly, but not unnecessarily so. This is in contrast to the pacing, which is relatively slow, letting the characters breathe, rather than just run. At times, one could reasonably argue, it does this too much. However, it definitely feels like a carefully-plotted season because of it, and endings are often cliffhanger-y, persuading viewers to let the next installment play immediately.

The weakness is that it’s not all that exciting of a story, at least not initially. The stakes aren’t clear, the ‘bad guys’ offering therapy, not enslavement. The danger is minimized, and when violence is interjected, it almost feels out of place. Which is not to say the series is tame, but just not all that intense. Though, June and Harry’s relationship is a little more chaste than you might expect two teenagers running away together to be.

And, as mentioned, the slow way things unfold means that it doesn’t stay gripping. For instance, June and Harry take time to go to a club in episode three. Sure, it’s part of their journey, they’ve just met new friends and all that. But it still feels a bit weird, when so much attention is devoted to the search for them, that they’re just kind of hanging out, having fun.

Overall, however, it seems like an interesting story that is being told in an intriguing way, a new twist on shapeshifting. THE INNOCENTS doesn’t share a lot of DNA with other series, which works in its favor. Filmed partially in Norway and produced by the UK, there’s an exotic quality to it that will only enhance American viewing. The acting and direction is quite solid.

The entire first season of THE INNOCENTS is streaming now on Netflix.