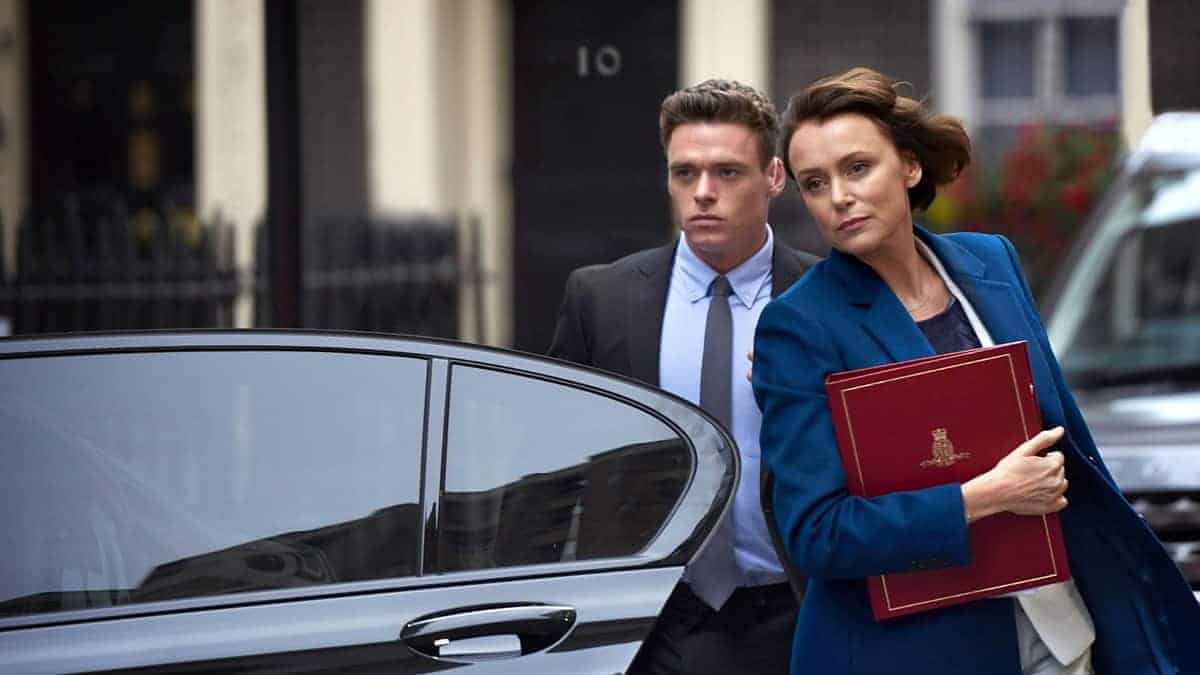 Netflix recently added another British drama to its mix. A modern political thriller, BODYGUARD follows a military veteran assigned to protect a Home Secretary whose views he despises. Is this a commentary on hyper-partisanship, or a message of how we can all get along? You’ll have to watch and find out.

The first episode spends a long time introducing Sergeant David Budd (Richard Madden, Game of Thrones). We first meet him traveling on a train with his children, and we learn who he is by how he handles a suicide bomber, at odds with how law enforcement would like to resolve things. Then the show moves on to what will likely be the main plotline of the series.

I have some issues with this opening. For one, it definitely gets the audience behind Budd. That’s not necessarily a bad thing for a protagonist, but considering there seem to be two very central characters to the series, it would be nice if there was some better balance. Viewers will likely take Budd’s side in any future conflict purely because we get to see him being a hero first. Not to mention, the portrayal of other police officers on the scene is mostly playing with stereotypes and tropes, rather than reasonable, seasoned people doing their job well. By the time a second character enters who seems a little like Budd, the damage is done.

After this, we find out that Budd’s marriage has fallen apart, though even that comes off as not exactly his fault. Which is where he is when assigned to BODYGUARD The Right Honourable Julia Montague (Keeley Hawes, The Durrells in Corfu). Budd has to tamp down the things that make up his identity in order to just be the job. There’s some good drama in that, even if who he is might just be a larger than life hero.

For her part, Hawes makes Montague likeable. Her policies are quickly revealed to be extreme and at odds with Budd’s beliefs, but otherwise, despite a nasty first scene, Montague is sympathetic enough. BODYGUARD does a fine job showing the pressure she is under and the tough decisions she has to make.

Or does it? As mentioned, Budd is who we’re rooting for, so where there’s conflict, Montague is operating at a deficit. Other characters introduced have very negative opinions on Montague, too, so things just keep stacking up against her. It’s quite a testament to Hawes that she can diffuse that hate, at least for the first episode. I do wonder how things will progress with the deck this stacked.

I am being a bit negative, but mostly because I think BODYGUARD has the bones of a very good series in it. If the pilot were adjusted slightly, it could start on more sure footing, which I suspect the other five hours will have. Will audiences stick with it long enough to find out, or will they turn it off early, as I was tempted to do? I’m glad I finished the first episode out and look forward to watching the rest, but it’s a bit concerning.

As far as direction, acting, and production design, BODYGUARD is excellent. As with most dramas these days, it skews dark, but that’s not necessarily a bad thing for the world it is portraying. There’s also a timeliness to it that feels important in the current political climate. It’s good to raise issues, whether they are resolved or not, and get people thinking about what freedom is worth. Putting a face on opposing viewpoints is also beneficial.

So in conclusion, the BODYGUARD is very good, almost great. Check it out on Netflix, where the entire first season is available now.