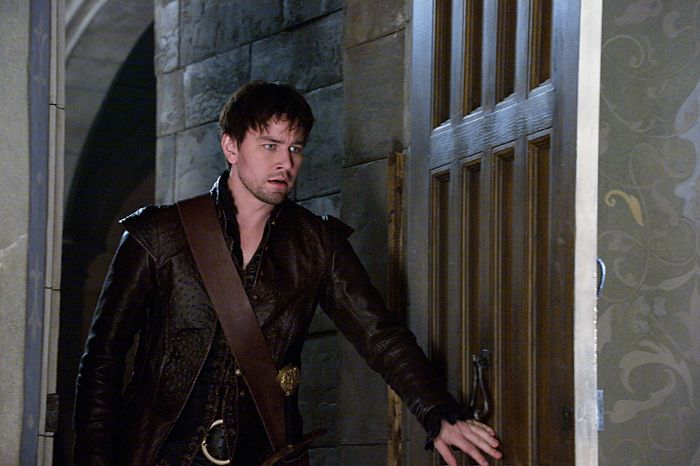 The first season of CW’s Reign ended with most of the kingdom in danger as the plague started to make its way across the country.

According to Torrance Coombs, who plays Sebastian (aka Bash), things are going to pick up pretty much where they left off. The plague is going to change everyone’s lives, especially Bash. The king’s bastard brother is going to find himself questioning everything he thought he knew.

“As far as the season arc goes, what comes along with the plague is so many dead and lost souls,” Coombs revealed. “There’s [been] so many people killed and people have passed it off to make it look like the plague. There’s a lot of restless souls, a lot of specters, a lot of spirits around the castle now. And it’s unclear if these are actual apparitions or if they’re fevered dreams. We’re almost playing with that theme of supernatural. But is it real or isn’t it?”

Does this mean that Bash will suddenly start to believe in ghosts and spirits and all those things he said were hogwash? Crazier things have happened. “Bash has always been a skeptic,” Coombs said. “He’s always said no. From day one he said, ‘The Darkness is just a guy, he’s an asshole and this is all just a bunch of men playing on people’s fears.’ But in Season 2 he’s forced to question that. We see his transition from skeptic to maybe believer, because there are some things that just can’t be explained.”

Fans might be surprised to see who appears in these visions. “We may see some visitations from old friends. Basically there are a lot of hauntings going on,” Coombs shared.

The coming of the plague will make Bash take a look at everything he once took for granted. It will also make him take a good, long look at himself and the things he’s done in the name of good.

“[The Darkness] was a guy supposedly staving off the plague and then [Bash kills] him and then, whoops, the plague hits,” Coombs said. “So there is a weird kind of guilt associated with that for Bash and then he’s forced to go, ‘Alright, maybe he wasn’t just full of it the whole time. Maybe the Darkness was on to something. Maybe morality is not so much right and wrong, maybe there’s more of a gray zone.’”

It’s a realization that will rock Bash to the bone. “Bash has such a strong moral compass. He thinks he’s doing the right thing and then sometimes it just turns out that he doesn’t know what he’s talking about. It’s always more complicated than that,” Coombs shared.

Though Season 2 promises to be a lot darker than Season 1, there is plenty of lightness involved in doing a show like Reign. Coombs and his cast mates will be live-tweeting the Season 2 premiere and they are going to turn it into quite the party.

“We’ve rented out a cinema and everybody’s getting together and we’re going to have a nice little tweet festival,” he said.

Live-tweeting with fans gives Coombs an interaction he hasn’t had since his days on stage. “It’s fun. Coming from a theater background, you’re used to that interaction with an audience. This isn’t the same thing, but it’s maybe getting a piece of that back. You unveil your performance to the world, the thing you’ve made, [and] the real-time reaction is not entirely unlike what you might get from an audience in a live stage production. There’s that same sort of nervousness to unveil this thing to the world and to see what people think of it.”

Twitter even led Coombs to a real-life fan interaction this summer when he traveled to Europe and got a message from a fan that said: “We’ve been outside your hotel for 3 hours, please come say hi.”

What did Coombs do? Why, he went out to say hello, but not without a few misgivings. “They figured out the hotel I was at somehow,” he said. “So I was like ‘alright’ and I went outside. I didn’t know what I was going to find out there, but it turned out it was some really sweet girls who brought us some gifts and gave us some tips of places to check out, we were in Paris at the time. [Then I thought] ‘Okay, here it comes. So they’re going to follow me on the road all day long and try to be my best friend.’ But no, all they wanted to do was say hi and take a few pictures.”

Apparently not all fans are crazy, despite what you might see online. “And that’s been the extent,” Coombs said. “As crazy and spooky as people can be on Twitter, in real life they’re really just sweet. I think online everybody just gets to be a little bit weird, including me, and people are just kind of chill when you meet them.”

Knowing that he might run into fans anytime has made Coombs more aware of his morning routine. “That just lets me know I’ve got to shower before I have to leave,” he said, adding that he wouldn’t want to run into anyone smelling “like a bag of ass.”

Be sure to catch Reign Season 2 when it premieres on Thursday, Oct. 2 at 9/8c on the CW.