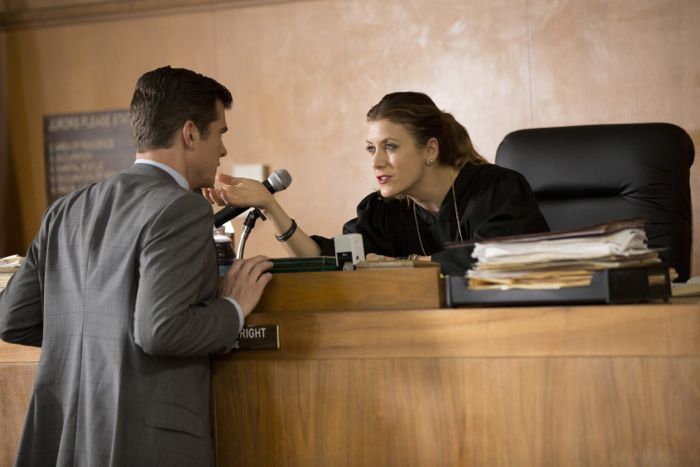 It’s not hard to figure out what NBC’s BAD JUDGE is about. Obviously, there’s a judge who is bad. But is she bad at being a judge? Is she bad at professionalism? Does she exhibit bad behavior in her personal life, such as drinking too much and sleeping with too many men? Yes.

The similarities between BAD JUDGE and last year’s Bad Teacher are numerous, and do not stop at the title. Both have a female lead in a profession that takes many years of education and evaluation, but somehow, they hold the position, despite having personalities and behavior that would never be tolerated in such a role in a million years. Both women show a tenderness towards children, but also say things they should not in front of said children. Both wear leopard print bras; both have Ryan Hansen (Veronica Mars) portraying a love interest for the protagonist. Both BAD JUDGE and Bad Teacher are not very good shows that have been, or likely will be if there’s justice in the world, quickly canceled.

There are some differences. Whereas Bad Teacher’s central figure is incredibly selfish and greedy, the judge here, Rebecca Wright (Kate Walsh, Private Practice, Fargo), is kind and good-hearted. She makes a ton of mistakes, but not out of cruelty. Her mess is her mess, and it doesn’t automatically negatively affect everyone around her, not really causing problems for them.

Rebecca is rude and crude in the courtroom, asking frequent prosecutor Tom Barlow (John Ducey, Jonas) to keep his voice down because she’s hung over and expecting bailiff Tedward (Tone Bell, Whitney) to dispose of her pregnancy test. However, she makes rulings that benefit people. And she takes her responsibilities so seriously that when a child whose parents she put away calls her for help, she runs to his side at a moment’s notice, repeatedly, much to her boss’s (Miguel Sandoval, Medium) chagrin.

Walsh is experienced at playing a character who is both smart and compassionate, while being someone who can’t get own her life together at the same time. She’s probably the right actress for the role, even more so than co-creator Anne Heche, whom I would have expected to want to star in her own vehicle. I don’t think the problems with BAD JUDGE lie in the her.

That being said, the writing is as messy as Rebecca herself. BAD JUDGE can’t decide what it wants to be, flitting around with different scenarios, then discarding them like a woman trying on many dresses for an important date, the material scattered on the floor, still in sight, but not looking the way it’s meant to be seen. The project suffers from this scattershot approach, whereas if one or two ideas were honed in on (a judge who goes out of her way to help criminal’s disadvantaged families, for instance), the series might still not be spectacular, but at least it would be cohesive. With any structure that could work, this should probably be an hour-long dramedy, not a half-hour sitcom.

The other problem is the complete lack of realism. As mentioned in my comparison of BAD JUDGE to Bad Teacher, there is no way anyone like Rebecca exists in the real world. Judges, like other professionals, may have their dirty little secrets, but for someone to flaunt her antics in the workplace the way Rebecca does and stay employed is completely ridiculous, and it would never stand. BAD JUDGE does a huge disservice to the career it portrays and the legal industry in general. Many viewers will be smart enough to tell the difference between reality and fiction, and I do think BAD JUDGE won’t perpetuate false ideas as much as Bad Teacher does, but the underlying principle remains the same.

In short, I recommend skipping BAD JUDGE, not because I dislike Walsh or Hansen or the others, but rather so this unfortunate experiment in bad comedy can be quickly cancelled and forgotten, and the team behind it move on to projects more worthy of them.

BAD JUDGE premieres this Thursdays at 9 p.m. ET on NBC.