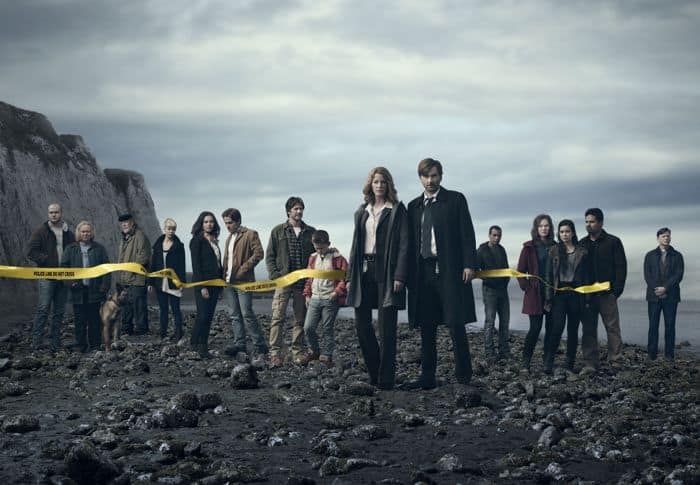 FOX’s GRACEPOINT is a ten-episode murder mystery based on the British series Broadchurch. Starring David Tennant (Doctor Who) as Alec Hardy Emmett Carver and Anna Gunn (Breaking Bad) as Ellie Miller, the duo investigate the body of a boy found on a beautiful beach in a small, tranquil, formerly crime-less town. The suspect pool is large, and the members of the community are all affected by the tragedy in differing ways, often making the case difficult.

The biggest obstacle GRACEPOINT faces is that a number of potential viewers have already seen the original, which recently aired on BBC America in the United States, and is currently available on DVD, iTunes, and Amazon streaming. The opening scene is almost exactly the same. Tennant starred in both, playing the same role, and much of the pilot follows the source material faithfully. The writers have promised a different killer and GRACEPOINT will fill an additional two hours of running time, so it won’t be a complete clone, but the parallels are numerous and easy to draw.

By comparison, GRACEPOINT loses in every head-to-head matchup. It’s a shame Tennant isn’t allowed to keep his accent and his hair now looks unnaturally tinged red. While Broadchurch features an omnipresent creepy tone, sort of like The Killing, GRACEPOINT goes in and out of that, mixing a modern, typical style with a unique one. A number of actors in the new version, especially Michael Pentildea as the victim’s father, Mark Solano, are inferior, if not outright horrible.

That being said, had I not seen Broadchurch (which filmed a second, yet unaired season recently), I would probably like GRACEPOINT quite a bit. Gunn and Tennant are both fantastic performers, and the couple of instances where Gunn slips back into Skylar-mode are charming, rather than distracting. The story is well set up, and the various personalities that make up the cast, including Kevin Zegers (Gossip Girl) as reporter Owen Burke and Nick Nolte (Luck, Warrior) as the boys’ mentor Jack Reinhold, are both interesting and plenty suspicious.

GRACEPOINT succeeds because it balances the crime investigation with the family pathos and the drama among the townspeople. There is an emotional core that is just as central to the series as the question of who killed Danny. This allows the audience to relate to the varied players and become invested in the saga, hopefully enough to tune back in on a weekly basis for a couple of months.

I applaud FOX for trying this out. While they have allowed Sleepy Hollow, The Following, and 24 to do shorter-than-normal seasons, this is the first cable-style series on the broadcast networks. It’s gritty and realistic, extremely serial, and the writing and characters are complex. This is a departure from the standard procedural junk that mucks up the airwaves, and is not only bold for one of the Big Four, but, for the most part, worthy of praise. They would have been a bit better off just airing the British version, but since I can’t see FOX or its peers doing that, this will have to do.

The biggest question I have is, can it iron out the rough patches as it goes along? If GRACEPOINT corrects its mistakes and minimizes the role of those in the cast who don’t really cut it as actors, it could find a fan base and be something that lasts a few years (though not too long, considering the premise). But, based on the shaky start, this has to clean up quick. And, should it do well enough to earn a second season, it needs to stick to the strengths of the franchise, not just presenting a second case the following year, refusing to fall into the regular TV traps. GRACEPOINT can be special if it wants to be badly enough and the network allows it.