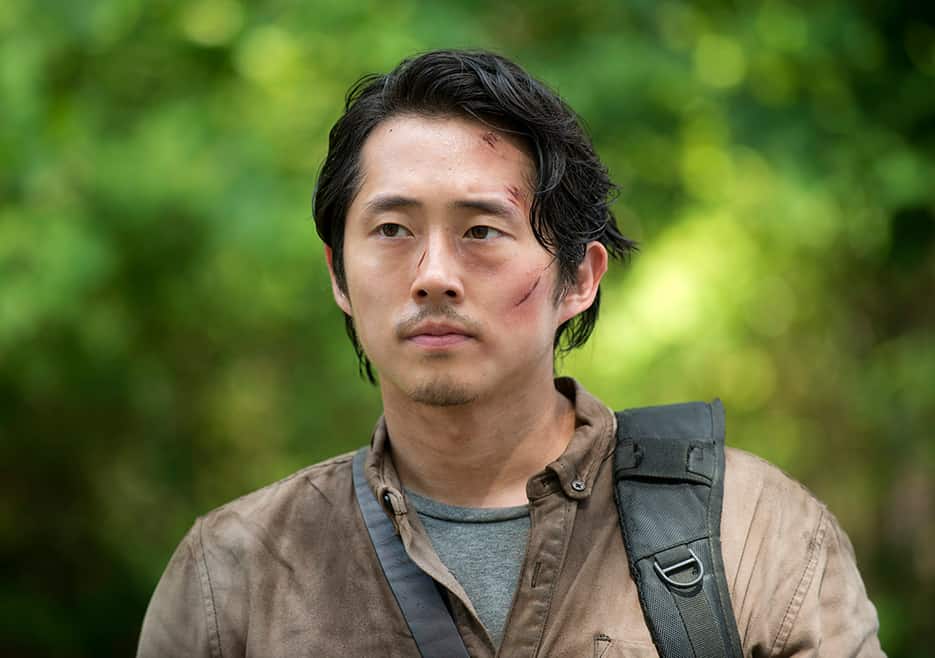 No one will be saying “Thank You” to THE WALKING DEAD after last night’s episode on AMC. With much of zombie herd closing in on Alexandria, Rick (Andrew Lincoln) works on a plan to redirect the walkers, while tasking Michonne (Danai Gurira) and Glenn (Steven Yeun) with getting some of their new neighbors home safe. Walkers may be slow, but they are persistent, and as Rick predicts, not everyone makes it home.

Early in the episode, Rick tells Michonne and Glenn that not everyone is going to make it and they have to understand that. This is kind of a running theme in THE WALKING DEAD. You may want to save everyone, but you just can’t. The world is too dangerous, and if you don’t know when to cut and run, you’ll end up dead, too.

Rick isn’t being heartless when he says this; he’s being realistic. I understand why Heath (Corey Hawkins) takes offense when he overhears these words, though. While Heath has left Alexandria to go on supply runs and recruit new citizens, he hasn’t faced anyone like the Governor, nor tried to protect a community of dependents under attack, so he doesn’t have full understanding. Heath’s arc in “Thank You” is an introduction to the harsh world he now lives in, which he only scratches the surface of prior to this.

Thankfully, Heath learns his lesson in time to make it home, but the whole group is not so lucky, some of his friends falling in order to teach him the truth. I am impressed with several of these new people. Annie (Beth Kenner, Battle Los Angeles) and Scott (Kenric Green, Let Me Go) ask to be left behind when they’re slowing the others down. David (Jay Huguley, Treme) knows he’s doomed, but just wants to get back to say goodbye to his wife. These guys may not be prepared for what they’re facing, but at least they’re trying and dying with dignity, not tearing others down along the way. And one of them, Scott, actually makes it.

Of course, not everyone is so heroic. Sturgess (Jonathan Kleitman, +1) takes off running, abandoning the group and getting himself killed for it. But the real detestable weakling in “Thank You” is Nicholas (Michael Traynor).

Throughout “Thank You,” I keep looking for Nicholas to step up. Glenn rescues him and gives him a second chance, and Nicholas has become a loyal student of Glenn’s. Yet, Nicholas keeps faltering over and over again in this hour, never acting quickly to do what needs to be done. My biggest worry as events play out is that Nicholas will die before he gets a hold of himself, as I’ve come to like him.

But then Nicholas kills himself in a moment of desperation and takes Glenn out with him, the ultimate act of betrayal and cowardice. Not only does Nicholas remove himself from the fight, but he robs our group of a good man who doesn’t deserve to go. It’s one thing to act stupidly or come to grips with your own limitations; it’s quite another if you hurt someone else while doing so. For this, Nicholas has ruined any chance he ever had of being remembered fondly.

Glenn’s death isn’t a huge surprise. He’s become the moral center of the show, and THE WALKING DEAD always kills its moral center. Always. Glenn is too good and gives people too many chances. I didn’t expect him to go at this point, in the penultimate act of the third episode of the season, but it just reinforces once again that anyone can die at any time on THE WALKING DEAD.

Now, in the Talking Dead after show, host Chris Hardwick didn’t confirm his death and a theory or two are batted around about how Glenn might miraculously survive. But I think the best thing we can hope for at this point is that someone finds a trace of him to confirm his fate. Glenn is gone, and as hard as that is, losing one of the original crew, we have to live with it.

Daryl (Norman Reedus) has his own crisis of conscience in “Thank You,” not sure what to do when Rick asks him to keep leading a portion of the herd away. Daryl’s instinct is to turn around and help his friends, protecting the town that gives him, as the sign says, a fresh start. This is a noble feeling, and one completely understandable. But it’s the wrong move, and when Daryl hears Rick possibly sacrifice himself for the greater good, he decides to stay on his mission. It’s the right call, one hard-earned, and may keep him alive longer than Glenn.

Speaking of Rick, our hero tries to make it to an RV to help redirect the walkers. After the longest mile anyone has ever run, or so it seems, he finds the vehicle, but is attacked by Wolves and he can’t finish the job. Rick won’t die here; he’s on the very short list of characters I think THE WALKING DEAD cannot kill, which currently includes only himself, Daryl, Michonne, and Carl (Chandler Riggs). Seeing him single-handedly fight off five Wolves proves Rick’s worth again. I don’t know how he’ll get out of this situation, especially feeling helpless when he realizes his attackers have come from Alexandria (the only place around with baby food), but he will.

And then the preview for next week’s episode shows us that it will be the long-awaited Morgan (Lennie James) flashback. I can’t help but feel this is an awful time to air this. Three weeks spent building up a giant herd, we need to see the resolution of that before taking a moment to catch our breaths. The only reason I can think of to do the Morgan flashback now, aside from artificially drawing out anticipation, which THE WALKING DEAD doesn’t tend to do (it draws it out, but authentically), is that Morgan will die in the upcoming battle and they need to get this in first. Considering Morgan’s pacifism and morality, that feels the most likely explanation. But I hope I’m wrong.

While I don’t want to say “Thank You” for an hour that killed off Glenn, this is yet another awesome installment of the best show currently on television. It has lots of action and death, but it all plays out around the complex character studies one has come to expect. Each development means something; nothing is gratuitous. That’s why this show is so, so good.

THE WALKING DEAD airs Sundays at 9 p.m. on AMC. For those who DVR it, make sure you set for 90 minutes next week (does anyone actually still manually set the time?), as that installment will be extra long.