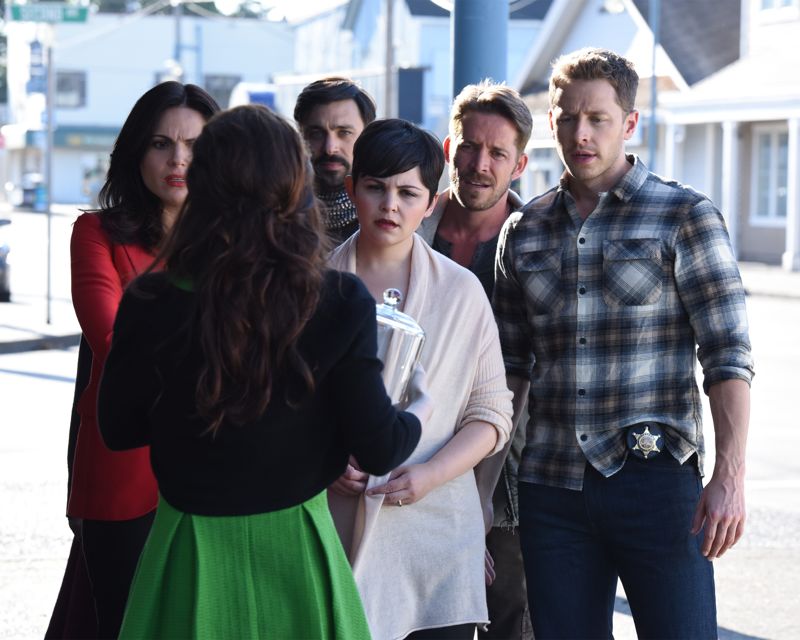 ONCE UPON A TIME Recap “Dreamcatcher”

This week on ONCE UPON A TIME, Emma (Jennifer Morrison) frees Merlin (Elliot Knight, Sinbad) from the tree in which he is trapped, but far from resulting in a happy ending, it only raises more questions. Weeks later, in Storybrooke, Regina (Lana Parrilla) uncovers Emma’s treachery against their son, Henry (Jared S. Gilmore), in a “Dreamcatcher,” bringing the heroes closer to figuring out Dark Swan’s plans, but driving a wedge between mother and son.

Where Regina and Henry and Emma and Henry are now is almost completely reversed from where they are at the start of ONCE UPON A TIME. Is Henry destined to never have both of his mothers be on the right side at the same time? Is the show really about the balance of light and dark, rather than about good triumphing over evil? If so, the ending will surely be a tragedy for everyone, the core characters too intertwined at this point to cast one as a pure villain.

How much is Emma to blame for what she is doing? When Rumple (Robert Carlyle) is the Dark One, he manages to let his love shine through and even engage in self-sacrifice in the name of love. Yet, he is consistently drawn back to his fiendish ways, the good in his heart never taking hold. Knowing this, can anyone truly blame Emma for anything she does, and isn’t she as much of a victim of the Dark One as anyone else? So by that logic, Rumple should be forgiven for everything, right?

Well, this is where free will versus mind control come into play. The question is whether Emma is being corrupted or if she’s been replaced in her own body. ONCE UPON A TIME keeps saying it’s the former, but actions seem to point to the latter. “Dreamcatcher” muddies the waters more by bringing a child in this, as while Henry is rapidly growing more mature, he can’t possibly instantly forgive Emma when she’s cured, which she must be. It’s a very depressing plot to consider.

The way Emma hurts Henry is by turning Violet (Olivia Steele-Falconer) against him in order to get a tear. Look, Henry is 13 years old, so only in a fairy tale would he end up marrying Violet (though, admittedly, this is kind of a fairy tale). Also only in a fairy tale would Violet be as taken in by Henry as he is by her, which actually makes her rejection of him feel more real than it ends up being. But whether Violet is the one he’s meant to be with or not, it’s a hard thing to lose a first love. So what Emma does is cruel.

I think all of this helps identify a fundamental issue with ONCE UPON A TIME. It wants to be set in the real world and also in the fairy tale world, but the two don’t mix well when it comes to rules governing reality. Things can either magically work out and heroes can always triumph over villains, or we can live in complex shades of grey. By never making up its mind which is going on, ONCE UPON A TIME is constantly contradicting itself and feeling authentic to neither.

Which isn’t to say that “Dreamcatcher” is an entirely bad episode. Despite some issues with the things happening above, the poignant story of a mother breaking a son’s heart does engage viewers. Rumple’s struggle to become a hero, and Merdia’s (Amy Manson) frustration when he fails, is also interesting. The concept of the pensieve dreamcatchers in the show is a cool conceit, even if it’s nothing new, and uses Regina’s past well. And I’m still invested enough in the characters to care what happens.

At least ONCE UPON A TIME hasn’t totally fallen apart in sense and continuity as some past arcs have done. Hopefully, it can still pull out a decent ending from this. It remains enjoyable and good, if not as deep or cohesive as it should be.

ONCE UPON A TIME airs Sundays at 8 p.m. on ABC.