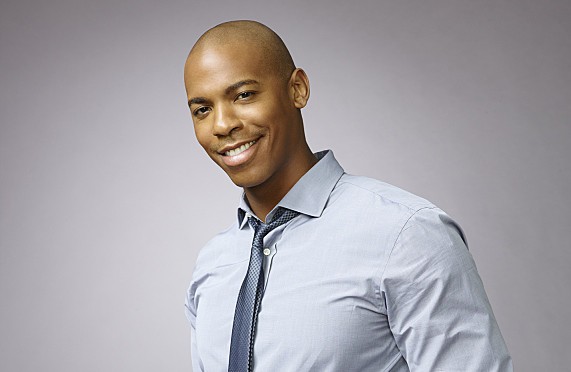 Mehcad Brooks steps into some mighty big shoes to fill in his most recent television series, where he picks up the mantle of Jimmy Olsen, the best friend and confidante of the man in blue aka Superman in Metropolis.  In CBS’ new drama series SUPERGIRL, Jimmy moves on over to Central City to keep an eye on and help out Clark Kent’s cousin Kara Danvers (Melissa Benoist) just as she starts to yearn to do something more with her life and the extraordinary abilities she has been blessed with after coming to live on Earth.  That’s right, for those not as familiar with Kara’s backstory, she like her cousin Clark was not born on Earth and comes from Krypton.  That means Kara is also faster than a speeding bullet, can leap tall buildings and pretty much go toe-to-toe with Superman in all that he can do.  So just where does Jimmy Olsen fit into this picture?  From the first moment they meet, it is clear that Jimmy and Kara are more than just future friends in crime-fighting and keeping Kara’s secret identity, there is an undeniable spark of attraction and their chemistry lights up the screen.  They also make a hilarious pair in comedic repartee and it is a pure delight watching them.

So in order to try to find out a bit more about just what role Jimmy Olsen will have to play in SUPERGIRL, at last summer’s CBS summer party at TCA, we had an exclusive chat with star Mehcad Brooks about the new series and the fun he is having on the show.

What drew you to the role of Jimmy Olsen after playing the outrageous role of T.K. on NECESSARY ROUGHNESS?
MEHCAD:  My mom is a journalist.  So I kind of grew up in a newsroom anyway and for me it is not that much of a stretch.

Your mom must be pretty excited you got this role then.
MEHCAD:  [Laughs]  She loves it.  She screamed louder than I did when I got it.  I think Jimmy Olsen is an amalgamation of my mom and my step-father, who is my dad.  Where T.K. was more an amalgamation of me in my early twenties and my biological father, who played pro-football.  So I’ve kind of taken from my own life and I try to make it as real as possible.

What do you like about Jimmy?  What do you think is fun about him?
MEHCAD:  Everything!  The show is so fun.  The script is a lot of fun.  The actors are great.  I love working with them.  And we get to go into Jimmy’s backstory and history.  So there’s something really nice about that as well.  I just have a good time playing him.

Jimmy seems to be a man with a few secrets and that is a version of Jimmy Olsen that we have not seen before.  He kind of comes across as the “all-knowing Oz” a bit.
MEHCAD:  [Laughs] He’s not — well, maybe his the “all-knowing Oz” as soon as Oz reveals himself — but Jimmy is human and he makes mistakes.  He has learned a lot of lessons being by Superman’s side, which he can then impart to Kara, but he’s not perfect.  He’s still learning and on his own path to find himself, as well, which is part of the reason he comes to National City in the first place.

Is Jimmy aware how much he has an affect on Kara?
MEHCAD:  [Laughs] He hopes he does!  For sure.  There’s definitely a mutual attraction.  But it’s kind of the bro-code:  “Superman is my home-boy.  I can’t really go after his cousin like that.”  Also, there’s that inter-species love hurdle — she is an alien after all.

So he’s hesitant, thinking there might be a green-person underneath that beautiful human looking exterior?
MEHCAD:  [Laughs]  Color doesn’t matter.  It’s the fact that she’s strong enough to rip his head off!  Like, what if they ever got into an argument?!  I was nervous a couple of times when we were doing scenes, and I was confronting her and she was confronting me, and Melissa had the suit on and she looked really strong in the suit and I was nervous.  I was kind of thinking:  “She could kick my ass!  It’s Supergirl.  She could throw me through a window or a wall.  I don’t want to argue with her.”

Will we see Jimmy in the field with Kara or is he more of just her go-to office guy?
MEHCAD:  He gets pulled into the action world.  I’m really looking forward to that.

What has been the most exciting thing that you’ve gotten to do, so far?
MEHCAD:  Go to work.  It’s amazing.  Every scene is a blessing.  I’ve never felt that way before, and I know people say that every now and then, but I mean it.

Who would you like to work with more as the show progresses?
MEHCAD:  I’ve think worked with everybody so far.  I worked with Melissa the most, and I’ve worked with Jeremy [Jordan] and Calista [Flockhart], and recently Chyler [Leigh].  I haven’t worked with David Harewood yet, but I’m looking forward to when that happens and I’m looking forward to seeing how they make that happen.  I would like to see how Jimmy gets to interact with the the Department of Extra-Normal Operations (DEO).  I’d be curious about that.  I love working with Calista; I’ve learned a lot watching her.  Melissa is amazing — past amazing.  We love playing off each other.  Same with Jeremy.  I love the cast.  My favorite cast ever.

Those scenes with Jeremy, is there that bro-code line there too between Winn and Jimmy?
MEHCAD:  For Jeremy, Winn is in love with Kara, but she doesn’t know.

Is Jimmy in favor of a possible Winn-Kara romance then?
MEHCAD:  [Laughs]  No, he is not.  Not even close.

What can you share about Jimmy and Cat (Calista Flockhart)?  They have an interesting dynamic in the office.  What is that like?
MEHCAD:  She is his boss and she makes no mistake about it.  You know she’s in charge.  But she does it in a very subtle, sort of nonchalant, cavalier way.  But she still listens.

Is Jimmy intimidated by Cat at all?
MEHCAD:  [Laughs]  Not as intimidated as everyone else.  He knows his worth.

To see how Mehcad and Melissa bring their sizzling chemistry to the screen, be sure to tune in for the premiere of SUPERGIRL on Monday, October 26th at a special time of 8:30 p.m. on CBS, before shifting to its normal timeslot at 8:00 p.m. on November 2nd.