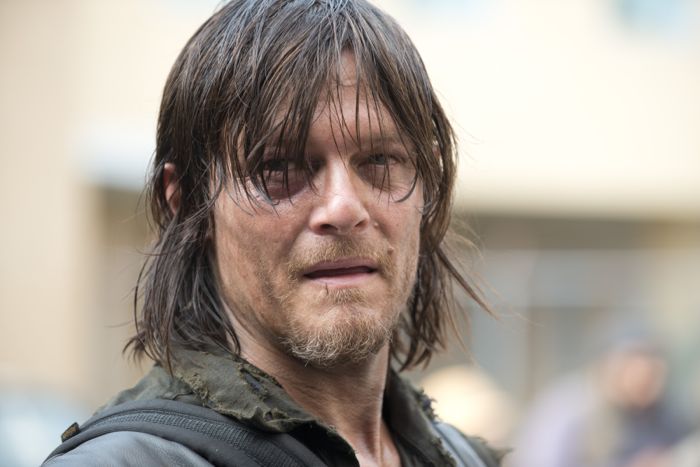 The “Coda” on the first half of the fifth season of AMC’s THE WALKING DEAD is a strong one. Rick (Andrew Lincoln) decides to go through with the peaceful prisoner exchange, even after one prisoner forces his hand by fleeing. But the meeting doesn’t go as planned, of course, and one of our beloved, long-time group members goes down.

Killing off a main character is an essential element of THE WALKING DEAD, but losing long-time performers must be done sparingly because there aren’t a lot of them left. Beth (Emily Kinney), who perishes during the hand-off, isn’t an original; she joined the cast in season two. Her loss is still felt severely, though, because not only has she been around awhile and is loved dearly by several other players, but she also has had a heck of a lot of growth recently into a capable combatant, someone who can take care of themselves in this bleak world. She did not start out that way.

Beth is introduced as a young, scared girl, and it takes a couple of seasons for her to even kill a Walker. She relies on others to protect her, even Daryl (Norman Reedus) when the two are separated from the main contingent after the fall of the prison. This season, though, in a couple of hours we see Beth prove herself against Dawn (Christine Woods), the brutal dictator of the hospital, and even kill a man who threatens her. And so when she dies stabbing Dawn to defend Noah (Tyler James Williams), she goes out nobly and heroically, not as a victim.

THE WALKING DEAD tends to kill characters after they’ve completed a journey. Whether it be Meryl’s redemption or Shane’s descent, there’s a way to predict who might be next based on past experience. The fans that thought Beth becoming tough might save her, myself included, have fallen for an avoidable trick the writers played, following an established pattern. Hopefully, like Beth, we’ll wise up in the future, and also hopefully, the writers will continue to stay a step ahead.

Beth’s passing will be rough on Maggie (Lauren Cohan), her last living relation. Maggie has to deal with the idea that Beth is gone amid much other chaos previously. Now, as the group reunites, she is given hope again, only to have it ripped away when she sees Daryl carrying Beth’s body. Maggie is tough, too, and I have no doubt she’ll be able to get through it. But I do think she may take inspiration from hearing Beth’s tale and it will harden her a bit more than she currently is.

Daryl will also be affected, having formed a bond with Beth. He feels responsible for losing her last season, though it isn’t really his fault. While he may take comfort in what he taught her, he may also feel responsible for trying to teach her how to survive. Had Beth stayed subservient, she could have survived the showdown. Though, she very likely wouldn’t have lived to make it to that point, so that’s moot.

Carol (Melissa McBride), too, will grieve (though I am incredibly relieved it isn’t Carol who is dead). Carol knows or will know that Beth saved her life. She owes the young blond, and will live with that spirit.

No one will mourn the passing of Dawn (except those who truly appreciate the excellent performance Woods delivers). She may have kept the hospital running, but there are other ways to go about that. Her own people don’t act to take revenge for her death, and let Rick, Noah, and the others walk away unharmed. If I were Rick, I wouldn’t trust that to last, given what happened with The Governor, and I’d get my people out of town. But I also highly doubt that the remaining cops will come after Rick, probably happy to dodge a blood bath and have a horrible person removed from their midst.

How horrible was Dawn really, though? Sure, she makes cold, calculating moves. But she does have respect for Beth in “Coda” and sees her as an ally. I think her facial expression in the aftermath shows she killed Beth by instinct, not on purpose. She is doing her best to keep things together; her best just isn’t good enough. When Rick kills Dawn’s fleeing man in “Coda” just because he runs, the similarities between the two become more clear, and the way Dawn’s people, except for Noah, don’t cling to Rick as a savior show they must not have hated her fully, or saw some kind of wisdom in what she built there. The leadership style of these two characters is different in small ways, not big ones, and this world only supports the kind of leaders who can make some very tough decisions.

Father Gabriel (Seth Gilliam) also shows us how others view Rick, having fled because he feared Rick’s people, who probably would have let him walk out the front door had he insisted. Out in the world, Gabriel sees evidence that the group has been honest with him and realizes why he needs their protection, which sends him right back to them. But had he not made that personal investigation on his own, he wouldn’t trust them, and it’s easy to see why.

Where does THE WALKING DEAD go from there? I’m thinking they have to travel to D.C. Not only does that happen in the comics, though they learn the truth about Eugene (Josh McDermitt) much closer to the capital, but it makes sense, Eugene’s lie being based on a logical assumption that if there is a cure, that’s where it’ll be. As I mentioned, given past history, it’s probably not a good idea to hang around Atlanta. Plus, Morgan (Lennie James) seems to be heading there, too, so if we’re lucky, he can join them.

“Coda” is an excellent mid-season ender, with some terrific character moments infused with grief and self-sacrifice. The death is well done, and the hour still has time to teach us a lesson without being too preachy about it. The dynamic and morality of our characters keeps changing, which makes for compelling television. I will be waiting with bated breath for its return.

THE WALKING DEAD will be back on AMC in February.