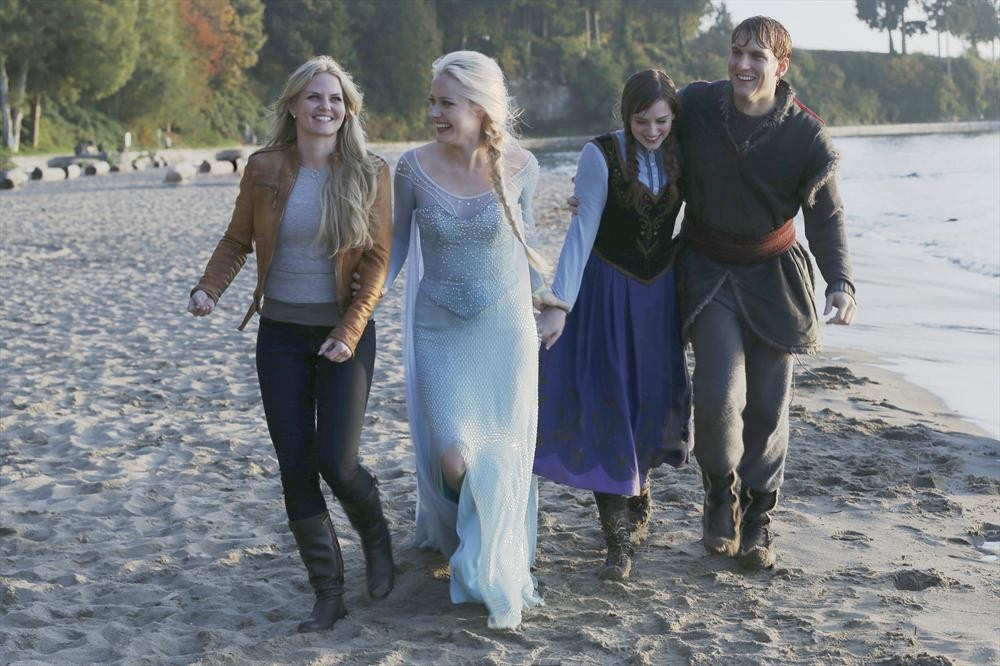 In the antepenultimate episode of ABC’s ONCE UPON A TIME autumn run, “Fall,” the residents of Storybrooke race against time to find a way to stop the spell of shattered sight, knowing it will cause them to turn on one another. Anna (Elizabeth Lail) may be the key to that, but she’s still missing. Elsewhere, we witness what happens to Anna after she is unfrozen from the Snow Queen’s (Elizabeth Mitchell) spell.

The spell of shattered sight had got to be the slowest spell ever. Ever. It takes an entire day to hover over Storybrooke before covering it? It’s not like it’s slowly advancing across the town, as everyone becomes affected at once. How effective, exactly, is a spell that is seen long before it becomes relevant, giving its would-be victims ample time to plan a defense?

I also don’t understand why the Snow Queen’s spell on Arendelle melts when it does. Clearly, all of her ice doesn’t dissolve because her wall stays up and Marian stays frozen (or so we can assume). These Storybrooke ice sculptures exist at the same time as the Arendelle ones for at least awhile, so it’s not because the Snow Queen has moved realms or over-extended herself. What’s going on?

Please correct me in the comments if I’m wrong, but Anna has to have been frozen more than the thirty years that “Fall” claims, no? When she visits David in the Enchanted Forest, that’s only three decades before the present? That doesn’t seem to me to gel with the already established events in that realm shown over the past few seasons. The coincidences that follow, with Hans, (Tyler Jacob Moore), Blackbeard (Charles Mesure), and the trunk being pulled from the sea at the last moment are equally ridiculous.

Though the sisterly reunion is sweet, and I’m very glad that loveable Kristoff (Scott Michael Foster) gets to come to Storybrooke, too. There has been more than enough separation between loved ones. What’s up with that mysterious bottle that somehow tags along?

Worse than these weird plot elements, though, is the absolute and total ruination of Rumplestiltskin’s (Robert Carlyle) character. This has been a frequent topic of complaint for myself and other ONCE UPON A TIME fans recently, and “Fall” just piles on. Rumple makes a deal with the Snow Queen to leave the town and take Belle (Emilie de Ravin) and Henry (Jared S. Gilmore) with him. That she agrees isn’t surprising, since he is somehow immune from her spell and can cause trouble for her. But thinking Belle and Henry will stay with him after fleeing is a leap Rumple is smart enough never to make. He knows they have big hearts and care about others, so abandoning everyone else will surely make them turn against him.

Also, Rumple has never been shown to be power-hungry. He’s addicted to magic, sure, but mostly learned his lesson long ago, one that has been reiterated time and again. To abandon all of his growth and his hard-found knowledge with some generically evil scheme is far beneath this role, and one that the series should never have attempted to do with him.

Why does Belle, who won’t leave the diner with Rumple when he first shows up, suddenly agree to do so just before he locks her in the shop? A few words from him about not trusting fairies and she changes her mind? Not to mention, Belle is a hero, not a coward or submissive wife. It’s very frustrating.

I find it very odd that, as the spell finally does come down, Snow (Ginnifer Goodwin) and Charming (Josh Dallas) worry only about themselves, locking each other in jail cells. They are supposed to be leaders for the community, but do nothing other than send a messenger to tell people what’s happening. Shouldn’t they be making arrangements to help their people get through it, rather than leaving themselves helpless (and stupidly next to each other) and ignoring the townsfolk? Plus, giving Emma (Jennifer Morrison) the task of defeating the Snow Queen and taking care of her baby brother at the same time makes no sense.

I don’t believe Hook (Colin O’Donoghue) would betray everyone quite as severely as he does. Sure, he’s a pirate who wants to save his own skin, so working for Rumple is a conceivable bit, up to a point. But knowing he’s about to lose everything, Hook still doesn’t find the heroic side that the show had been cultivating in him? Dumb.

This episode isn’t without its moments. Regina (Lana Parrilla) and Robin Hood (Sean Maguire) have a touching scene that, while a bit repetitive, is moving. Watching the Blue Fairy (Keegan Connor Tracy) be taken down, surely temporarily, is dramatic. Emma has some emotional stuff that works for her.

However, this is overshadowed by all of the weaknesses in the hour. It’s true you could argue some of my points and we could agree to disagree on motivations. What there’s no denying is there are a TON of plot and character inconsistencies. When added together, this makes for a very disappointing and uneven episode, and the sheer number of them defies defense. I’ve mostly enjoyed the fall run, other than the decline in quality of Rumplestiltskin, but things are coming completely apart at the end and that’s not a good sign. ONCE UPON A TIME has almost always been uneven. “Fall” is some of the worst of that.