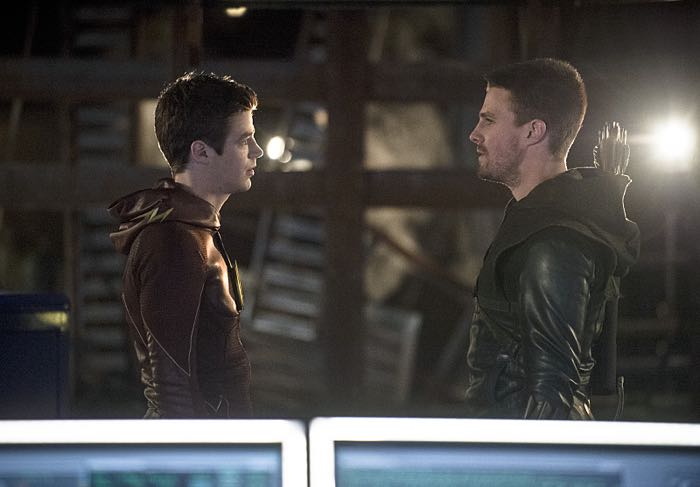 Fans of Arrow and The Flash were treated to a special screening of both crossover episodes in Hollywood last weekend. After watching the episodes with the fans, cast members from both shows including, Stephen Amell, Emily Bett Rickards, David Ramsey, Grant Gustin, Danielle Panabaker, Carlos Valdes, as well as executive producers Andrew Kreisberg, Greg Berlanti and Marc Guggenheim were on hand to for a live Q&A.

The Flash “The Flash vs. Arrow” Preview

This episode is everything that fans of The Flash and Arrow have been waiting to see. The title tells you what the most exciting scene will be, but it doesn’t tell you some important information about it. You see, there’s a reason that Barry and Oliver go up against each other and it’s frightening to witness what this factor brings out in both of them. In addition to the epic battle, there’s also a lot of fun to be had in watching both groups interact with each other.

Arrow “The Brave and the Bold” Preview

In the second episode of the two-parter, Barry and Oliver are past the situation that had them at each other’s throats in the first episode. This time they are working together, but Barry quickly learns that being a superhero isn’t only about making up cool names for villains and playing games in your secret lair. Oliver and his friends teach Barry and his group what kind of responsibility is involved in saving the world.

From the Q&A: The Making of the Crossovers

When asked why they chose to do a crossover so soon into The Flash’s fist season, the creators said it had everything to do with the origin of both series. Usually, most networks would shy away from crossing over series until later. Because these shows came from D.C. comics, they remarked that the crossover element is “literally how the characters were born” and they felt they owed it to themselves and the fans to try and do them sooner rather than later.

As fans themselves, the creators said that they have sat around and discussed who would win in a battle between the two characters and it was something they wanted to see on screen. Which is why, in one of the episodes, you will see a couple of the cast members having that “Comic-Con argument” over who would win between Arrow and The Flash.

When asked about the preparation that went into the sequence where Arrow and the Flash have it out, Amell said that it was definitely a different experience because of the special effects element.

“I fought the air a little bit. I kicked the air’s ass,” Amell said about battling it out with the fastest man on Earth.

Barry and Iris will find themselves at odds in the episodes, which may have some Barry/Iris shippers worried about their future. Sadly, it looks like those two won’t be jumping into each other’s arms anytime soon.

“Barry doesn’t actually have love very high on his priority list right now,” Gustin said. “As much as he may think about Iris, making that happen isn’t necessarily the most important thing to him right now. He will always love her. She’s the love of his life and that’s not going to change, I think.”

Will Barry ever let Iris in on his true identity? “Barry’s going to be honest in the near future about some things. I won’t say what that is exactly, but it will be very big.”

Caitlin’s supposedly-dead fiancé will be coming back into her life, but not in a way she ever expected: as Firestorm.

“She spent the last year mourning the loss of Ronnie and then she thinks maybe he’s back and wonders if she has lost her mind,” Panabaker said about Caitlin’s reaction to Ronnie’s return. “Seeing him in a very different form is extremely challenging for her.”

A Lighter Side of Arrow?

When Team Arrow meets Team Flash, there are some moments that suggest Ollie and his crew might just learn to lighten up a bit, but don’t bet on it. “That smile that you saw on Oliver’s face lasts about four seconds in the next episode and then it’s gone,” Amell said.

The Best/Funniest Moment in the Crossovers

When asked what their favorite part of working on the crossovers was, both casts agreed that it was getting the chance to work with the actors from both shows. They had so much fun, in fact, that some joked it was a wonder they got any work done at all.

One scene was particularly memorable for all who were involved with it. “The scene where Dig sees Grant as Flash for the first time, you could build an entire blooper reel from that scene,” Amell declared. “If you watch it again, you will see me bite my lip a little because it was the only way I could get through it.”

Apparently the first take was so hilarious that the entire crew laughed. Gustin agreed that that moment was definitely his favorite in both episodes.

Be sure to check out what happens when the Flash takes on Arrow in the CW’s crossover event, starting on Tuesday, Dec. 2 with The Flash and ending on Wednesday, Dec. 3 with Arrow.