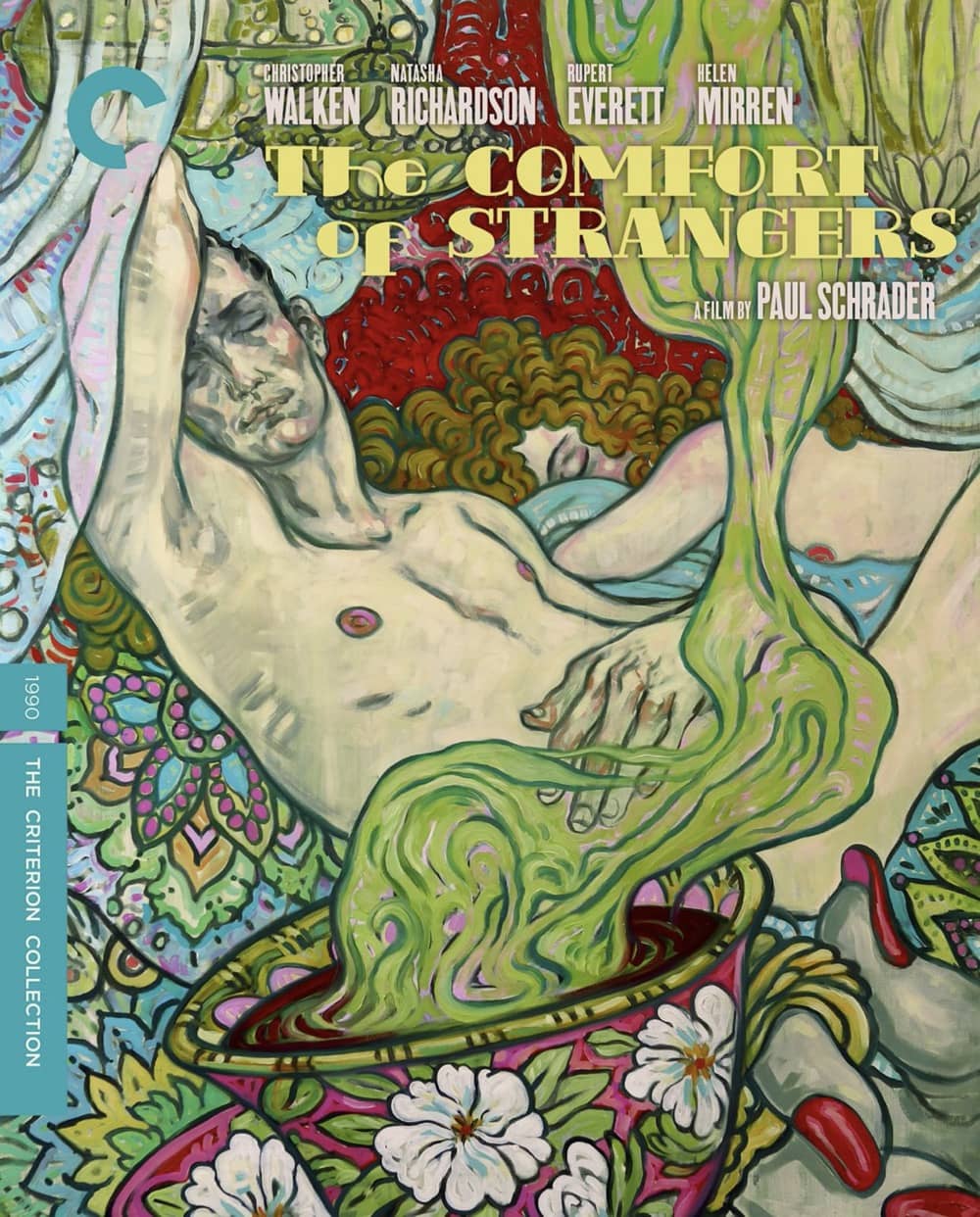 This August, things are getting a little heated—a psychosexual thriller from Paul Schrader, a sun-kissed social-realist drama from Jean Renoir, and Chris Hegedus and D. A. Pennebaker’s document of a riotous feminist debate all join the collection. Plus: a new Blu-ray edition of the politically scathing The Lost Honor of Katharina Blum, and our recently announced box set, The Complete Films of Agnès Varda.

The Comfort of Strangers

Adapting the acclaimed novel by Ian McEwan, playwright and screenwriter Harold Pinter lends his trademark unnerving dialogue and air of creeping menace to this spellbinding study of power, control, and the frighteningly thin line between pleasure and pain. Rupert Everett and Natasha Richardson are the prey, a beautiful British couple working on their relationship while on holiday in Venice; Christopher Walken and Helen Mirren are the hunters who draw them into the sinister web of their opulent, old-world palazzo. What plays out is an unsettling, sadomasochistic seduction imbued with an atmosphere of sumptuous dread by the elegantly gliding tracking shots of cinematographer Dante Spinotti, lush score by Angelo Badalamenti, and carefully controlled direction of Paul Schrader, who choreographs a mesmerizing pas de quatre of sustained erotic and emotional tension.

In 1934, Jean Renoir stepped off the soundstage and headed to the South of France, where he captured vivid human drama amid the bucolic splendor and everyday social rituals of the countryside. Based on a true story and set in a community of immigrants living, working, and loving on the margins of French society, Toni follows the eponymous Italian migrant (Charles Blavette), whose tempestuous affairs with two women—the faithful Marie (Jenny Hélia) and the flirtatious Josefa (Celia Montalván)—unleash a wave of tragedy. Making use of nonprofessional actors, on-location shooting, and the resources of the great Marcel Pagnol’s Provence studio, Renoir crafts a marvel of poetic feeling that became a precursor to Italian neorealism and a favorite of the directors of the French New Wave.

On April 30, 1971, a standing-room-only crowd of New York’s intellectual elite packed the city’s Town Hall theater to see Norman Mailer—fresh from the controversy over his essay “The Prisoner of Sex” and the backlash it received from leaders of the women’s movement—tangle with a panel of four prominent female thinkers and activists: Jacqueline Ceballos, Germaine Greer, Jill Johnston, and Diana Trilling. Part intellectual death match, part three-ring circus, the proceedings were captured with crackling, fly-on-the-wall immediacy by the documentary great D. A. Pennebaker and a small crew, with Chris Hegedus later condensing the three-and-a-half-hour affair into this briskly entertaining snapshot of a singular cultural moment. Heady, heated, and hilarious, Town Bloody Hall is a dazzling display of feminist firepower courtesy of some of the most influential figures of the era, with Mailer plainly relishing his role as the pugnacious rabble-rouser and literary lion at the center of it all.

The Lost Honor of Katharina Blum

When a young woman spends the night with an alleged terrorist, her quiet, ordered life falls into ruins. The Lost Honor of Katharina Blum portrays an anxious era in West Germany amid a crumbling postwar political consensus. Katharina, though apparently innocent, suddenly becomes a suspect, falling prey to a vicious smear campaign by the police and a ruthless tabloid journalist that tests the limits of her dignity and her sanity. Crafting one of the most accessible and direct works of 1970s political filmmaking, Volker Schlöndorff and Margarethe von Trotta deliver a powerful adaptation of Heinrich Böll’s novel, a stinging commentary on state power, individual freedom, and media manipulation that is as relevant today as when it was released.

The Complete Films of Agnès Varda

A founder of the French New Wave who became an international art-house icon, Agnès Varda was a fiercely independent, restlessly curious visionary whose work was at once personal and passionately committed to the world around her. In an abundant career in which she never stopped expanding the notion of what a movie can be, Varda forged a unique cinematic vocabulary that frequently blurs the boundaries between narrative and documentary, and entwines loving portraits of her friends, her family, and her own inner world with a social consciousness that was closely attuned to the 1960s counterculture, the women’s liberation movement, the plight of the poor and socially marginalized, and the ecology of our planet. This comprehensive collection places Varda’s filmography in the context of her parallel work as a photographer and multimedia artist—all of it a testament to the radical vision, boundless imagination, and radiant spirit of a true original for whom every act of creation was a vital expression of her very being.