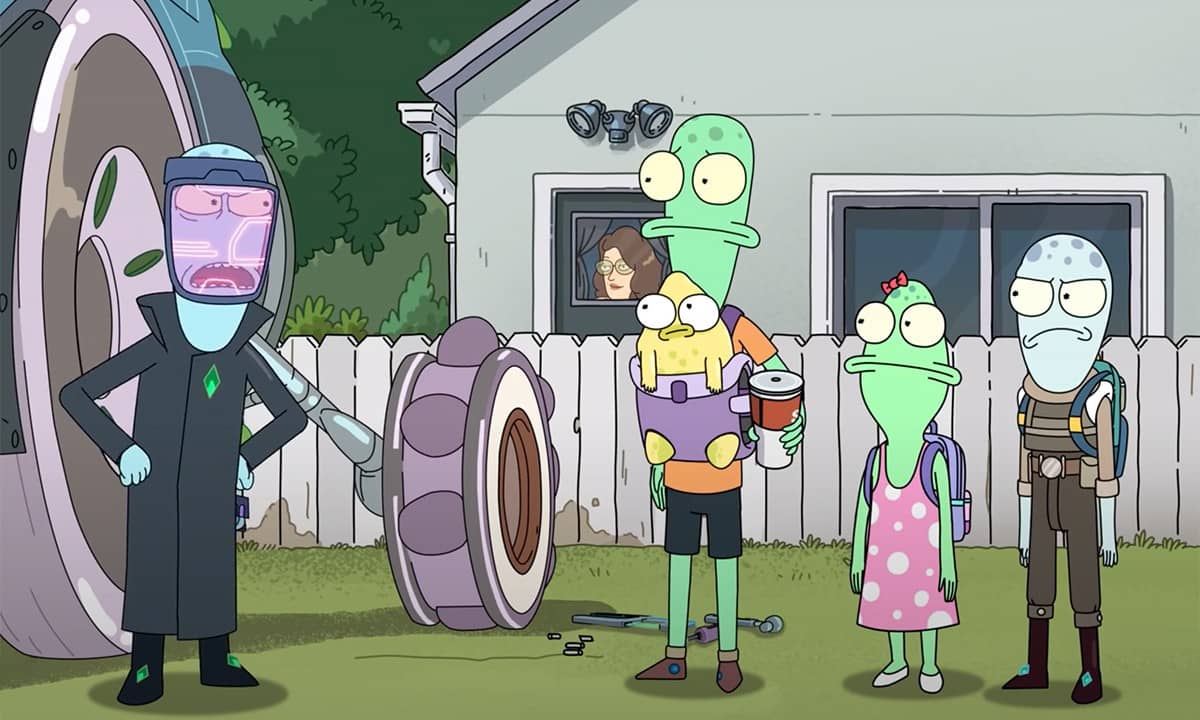 Hulu recently released the first eight episodes of SOLAR OPPOSITES, a new cartoon comedy from Justin Roiland and Mike McMahan. It follows a family of aliens whose home world was destroyed, and who have now crash landed on Earth and settled into suburbia. What remains to be seen is if the aliens decide that their new home is great or terrible, and if their neighbors will ever accept them.

You may not have heard of Mike McMahan’s work, though he did create the upcoming Star Trek: Lower Decks animated series. But it would be hard to miss Justin Roiland, who co-created the very popular Adult Swim series Rick and Morty. What is blatantly obvious from the first frame is that SOLAR OPPOSITES is very Rick and Morty-like, and could very easily exist in the same universe, on the same planet even, were not the two television series owned by different companies.

Primarily among the similarities, besides the animation style and genre, is Roiland voicing the leads. Roiland is both Rick and Morty, and in SOLAR OPPOSITES, he’s the head of the four-member clan, Korvo. Korvo sounds very much like Rick, just a little more cultured and a little less-burpy. Korvo’s best friend, Terry (Thomas Middleditch, Silicon Valley), bears a striking auditory resemblance to Morty, as well, though is a little less whiny.

The differences are a little scanter, though important. Rick and Morty are always escaping Earth to go on crazy adventures, while Korvo, Terry, the two extraterrestrial children, Yumyulack (Sean Giambrone, The Goldbergs) and Jesse (Mary Mack, Golan the Insatiable), and their possibly sentient pet, The Pupa (Sagan McMahan), stay at home. This makes SOLAR OPPOSITES a little closer to 3rd Rock From the Sun, with a similarly vague explanation as to how these four or five individuals are related to one another.

The humor and tone is nearly identical to Rick and Morty. For my taste, there’s far too much ‘gross’ stuff, with plenty of puking and slime. Unlike Rick and Morty, however, the story doesn’t immediately distract you from just how disgusting it can be. With a weaker and less compelling plot, at least in the first couple of episodes, it’s harder to get past that. If you don’t mind the grossness, the complaint here comes down to that pedestrian stories aren’t as interesting as awe-inspiring wonder.

In short, this feels like an unnecessary spin-off of Rick and Morty. Despite that not being officially what it is, not a paragraph in the above goes by without bringing up that other show. By making the two so strikingly alike, it’s impossible to talk about one without the other. And that is definitely to SOLAR OPPOSITES’ detriment.

The one thing SOLAR OPPOSITES might have going for it is that it seems more serial than its still-running predecessor. There’s a mission the crew is on Earth to accomplish, though it remains to be seen if they’ll actually make any progress towards doing that. There’s also a running story about Yumyulack and Jesse’s human ant farm that seems finite and begs for consequences. If these things come to a head, that could elevate the storytelling above the weekly plots, which aren’t all that original on their own, and the weird jokes seem less novel after Rick and Morty already told so many in that style.

Given that Hulu released eight episodes at once, they’re likely hoping viewers will push on to see what happens with those. Although I only watched the first two before writing this review, I am sufficiently intrigued to push on. But I’m not enthusiastic about it. An already-ordered second season leaves me concerned that the first batch will be open-ended and not go far enough towards advancing these threads. Though, there’s only one way to find out for the moment.

The first season of SOLAR OPPOSITES is available now on Hulu.