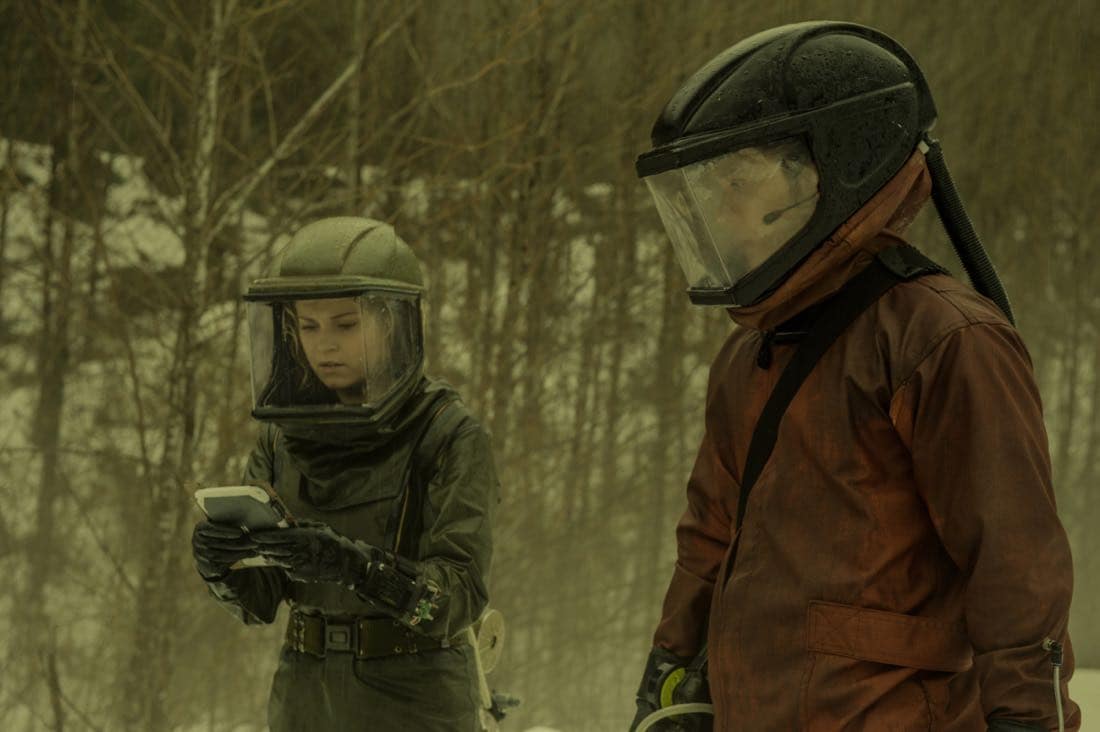 It is hard to imagine that in what has taken viewers 4 seasons to watch, in the world of THE 100, only 9 months has past since the day the first day the original hundred delinquents arrived back on Earth, until the end of Season 4 when the “death wave” (aka praimfaya) scorches the entire planet. Nine months. It feels like a remarkably short amount of time: Season 1 taking place over 29 days; Season 2 taking place over 23 days; then an 86 day gap between Season 2 and 3; with Season 3 taking place over 5 months; and Season 4 taking place over another 3 months.  So much happened during those 9 months that we cannot fully appreciate how little time has passed for the characters.  There has been remarkable discoveries, alliances, betrayals, wars, escapes, close-calls, and so, so many deaths.  Astoundingly, there was also time for our heroes to fall in love and, for some, to fall in love again. After all, the return to Earth was not just an effort to save themselves and repopulate Earth after the nuclear apocalypse from 97 years earlier, it was a new beginning for each of them.

During that 9 month journey, we watched through the eyes of Clarke Griffin (Eliza Taylor).  Clarke is the heartbeat and social conscience that guided all of her people throughout each season of the show. We saw the return and assimilation of this new world through Clarke’s rose-colored glasses along with her unfailing belief that her people must be saved no matter what the cost: such as when Clarke unflinchingly used the drop ship as a weapon to defeat an army of Grounders at the end of Season 1; Clarke also pulled the lever to kill every living resident of Mount Weather at the end of Season 2; then Clarke pulled the “kill switch” on A.L.I.E. at the end of Season 3. Clarke also sacrificed her first love Finn to save him from the bloody retribution of the Grounders in Season 2.  Hard decisions and a willingness to stand by those decisions, no matter what, has made Clarke a strong, powerful and decisive leader. Yet, she also loves easily and follows her heart.

It was no surprise then, when in the Season 4 finale, Clarke chose to be the one to stay behind and risk everything to get the satellite tower operational so that those fleeing back into space to the Ark would have the power they needed to open the Ark doors and safely dock inside the hanger bay.  In Clarke’s mind, there was no other option. She was the only person who might survive the “death wave,” as she was now a Night Blood.  It was not initially her plan to be left-behind, but when the satellite tower antenna would not align as needed, she did not even hesitate: she began climbing up the tower determined to ensure that everyone else in Becca’s rocket would survive. She was doing it for Raven, Monty, Harper, Murphy, Emori and even Echo. Most of all, Clarke was doing it for Bellamy (Bob Morley).  If there was one person that had to survive, it was Bellamy. Clarke had not spared his life to have him die in that rocket. Her life may not be guaranteed, but Bellamy’s life would be.

Yet then a miraculous thing happened, Clarke survived. The Night Blood pumping through her veins had saved her.  That and Becca’s bunker.  6 years later and Clarke was not only alive, she was thriving. She was out in the sun, breathing fresh air, and healthy. She was also patiently waiting. For every day for over a year, Clarke had been sending daily communication signals up through the atmosphere in hope that she would finally reach those still alive on the Ark.  More importantly, she was reaching out to Bellamy. She was not spending her days just signaling, she was talking specifically to Bellamy: “Here we go again — Bellamy, if you hear me, I’m still alive. I don’t know why I still do this every day — maybe it’s my way of staying sane, not forgetting who I am, who I was. It’s been safe for you to come down for over a year now — why haven’t you? The bunker’s gone silent too. We tried digging them out for a while, but there was too much rubble.  I haven’t made contact with them either.  Anyway, I still have hope. Tell Raven to aim for the one spot of green and you will find me.  The rest of the planet, from what I have seen, basically sucks. . . Never mind, I see you.”

Six years of waiting. Clarke was not just the girl who waited, she was hoping. Clarke Griffin was hoping for Bellamy’s return.  She had passed on the mantle of responsibility to him in those final moment together when she had told him: “Bellamy, I need you to hear this — we have been through a lot together, you and I. I didn’t even like you at first — and that’s no secret. But even then, every stupid thing you did, it was to protect your sister. She did not always see that, but I did.  You’ve got a big heart, Bellamy. . . People follow you. You inspire them because of this [touches his heart]. But the only way we make sure we survive is if you use this too [touches his head].”  But it was not just passing the torch of responsibility, Clarke was telling Bellamy that he needed to survive no matter what. Not just because others were depending on him, but because she wanted him to live and she was depending on him to return safely to her.

Bellamy must have heard that silent plea, as he did exactly what she wanted him to do. He closed the rocket door, he said: “This is what Clarke would want us to do. We wait, we die.”  And as they took off, Bellamy quietly said back to her across the distance: “May we meet again.”  So he hopes and plans to wait too.

Across the universe, from Becca’s bunker to the Ark, Bellamy and Clarke are hoping and waiting to return to each other — one way or another.  Imagine that: a love steadfast and true that they will wait on each other, hoping that the future will give them chance to meet again.

In Bellamy’s case, his love has been apparent for quite a while.  So much so that others have seen it, whether it was Abby, Kane, Jaha, Roan, or Murphy.  Anyone who had seen them together could see how evident it was. They could feel it.  Even Clarke seemed to be waking up to the reality that Bellamy cared for her and loved her.  She could feel it too. What surprised her more was the growing realization that she cared for and loved him too. Clarke had let the missile fall on Tondc to keep Bellamy safe with Mount Weather; Clarke sacrificed her freedom for him in Season 2 when Roan could have killed Bellamy; Clarke later traded away 50 remaining spots in the drop ship to save Bellamy’s life in Season 4 when Roan had Bellamy captive yet again; Clarke made sure Bellamy’s name was on the list for to be safe when the “death wave” struck; Clarke even had Bellamy kidnapped to save him once Skaikru hijacked the temple bunker; and finally, Clarke could not pull the trigger when Bellamy was determined to open the hatch door and save his sister.  It was perhaps a slow awakening to the depths for which she did care, but even Clarke could not deny that above all else, she wants Bellamy back with her and by her side.

The Season 4 finale did not just show Clarke waiting, it gave us a glimpse into her heart.  Clarke was not just waiting, she was hoping, and planning of the life she had been dreaming of for 6 years with Bellamy.  Clarke Griffin, the girl who waited.

Across the universe, Bellamy and Clarke wait. Let Season 5 reunite them and reward them. We shall wait with them until then.