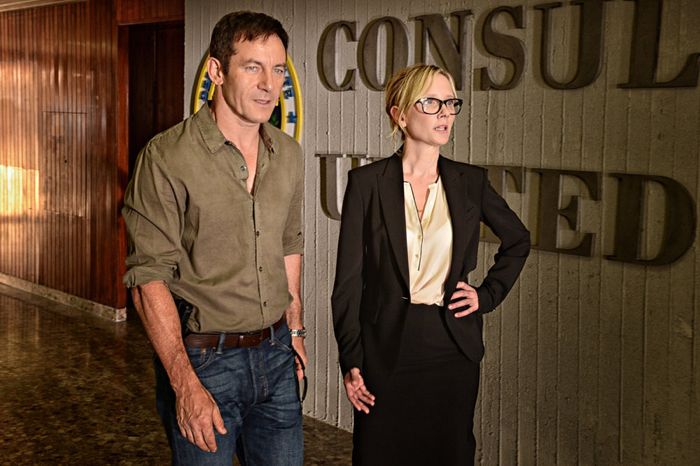 On Day 9 of the 16-day biannual Television Critic’s Association Winter 2015 Press Tour,  Syfy, USA Network, E! and Bravo introduced their featured programming, and the following are quick takes of their new and returning series.

NBC Universal announced will no longer report overnight cable ratings and will only share L-3 ratings from this point forward.  It noted that in these rapidly changing times, viewers are no longer watching television shows live and it is important to shift ratings to accommodate the more flexible viewing schedule of the viewing consumer.

This is an incredibly exciting time for Syfy as it offers more event programming in 2015, including its new series “12 Monkeys” (time-traveler from a decimated point in the future comes back to prevent a viral holocaust), and the limited-series “Childhood’s End” (peaceful invasion of Earth by mysterious Overlords) and “The Expanse” (thriller set 200 years in future after man has colonized the stars and the case of a missing woman).

“The Expanse”  takes viewers to a remote area of space 200 years in the future where a mystery unfolds around a missing woman and exposes an extensive, chilling conspiracy spanning the universe.  It stars Thomas Jane, Steven Strait, Shohreh Aghashboo, Cas Anvar and Dominique Tipper.  Thomas Jane describes “The Expanse” as a bit of noir thriller, like the characters stepped right out of 1940’s.  Naren Shankar explained that, in “The Expanse,” there’s earth, the Martians, and the Belt — with an assortment of ragtag asteroid stations, miners, colonies.  Mark Fergus says “The Expanse” is a really faithful adaptation of the books, but they’re definitely going to make changes for the story on the show. Shankar noted that there’s an amazing amount of material to work with in the Daniel Abraham/Ty Franck books from which “The Expanses” is based.  (Observation:  Syfy’s “The Expanse” helmed by Naren Shankar which makes sense as the new sci-fi series has “Almost Human” mashed up with “Farscape” vibe. Also there seems to be curious sci-fi trend of using historical eras for TV shows, for example: “Firefly” had western feel, “Ascension” felt right out 60’s, and “The Expanse” has a 1940’s noir style.)

Another big big drama coming to USA Network is its series “Complications,” which is story of a doctor whose live is changed forever after he save the life of a young boy involved in a drive by shooting, embroiling him in a brewing gang war and he never knew that saving one life would jeopardize so many others.  But once that line is crossed, there is no going back.  Worse yet, it shines the spotlight on his own life, in which he may have something of his own to hide.  USA Network’s drama “Complications” looks like medical drama, but due to a few cookie crumbs embedded in the story it makes you suspect that there is bit of a spy drama woven into it —  especially since “Complications” comes from “Burn Notice” creator Matt Nix, so not a stretch to think he created new medical show with a spy at center. So if USA Network’s “Complications” does not reveal Jason O’Mara’s character is a sleeper spy (a la “No Way Out”), I’m going to be crushed.  That said, I am intrigued by “Complications” and look forward to seeing where it takes story of a doctor whose life is forever changed by one heroic moment. “Complications” stars Jason O’Mara and Jessica Szohr, and executive producer Matt Nix describes it as, “This show is about what it means to be a hero.” For example, Jason O’Mara said his character’s grief and anger over losing his daughter from leukemia pushes him to save the boy and do everything to save him, even taking on a gang war.  O’Mara said that his character’s pain and grief are connected and he is just trying to get on with his life and his work. But that pain goes very deep, and he can’t find a way to articulate it, so he is trying to channel that anger and use it for a positive reason and effect positive change.  “Complications” premieres Summer 2015 on USA Network.

“The Royals” tagline: love, hate, and revenge are taken to a decadent new level — trust is something this family simply cannot afford.  the show is lavish and tons of fun.  “It’s anarchy in the monarchy.” Coming from creator/executive producer Mark Schwahn (who created “One Tree Hill,” “The Royals” embodies more heart and soul than expected.  Feeling that confident about the series, E! has ordered a second season of “The Royals” even before its March 15th debut.  Wow.  But you will be grateful they did after you have seen the first episode.  Addictive is an understatement!  Star Elizabeth Hurley Liz Hurley said her fictional Queen in “The Royals” is a mashup of Princess Di and Cruella de Vil. Hurley explained in “The Royals,” the Queen wants her children to be fabulous and a great example to the world; unfortunately, she thinks they’ve failed miserably. Fun note: “The Royals” is shot on location at Blenheim Palace, and other actual locations like Wilton and around modern-day London.(Observation:  E!’s”The Royals” is one of the most surprising new shows of 2015. Darker and more compelling than expected. Very addictive. I’m in. Great to see shows like E!’s “The Royals” & Lifetime’s “UnReal”, both which could have been very light and spoofy, embraced their dark sides. “The Royals” stars Elizabeth Hurley, Alexandra Park, William Mosley and Merritt Patterson – you are going to fall in love with each of them!  I’m calling it: E!’s “The Royals” is the most addictive new series of 2015 and is will soon replace “Scandal” as the most buzzed about TV show. Previews do not do “The Royals” justice. The writing of the characters and dialogue is stronger than the preview clips convey. Love it when writing rises to that level.)

“Odd Mom Out” is a new comedy series from Bravo.  It is a fictionalized version of star Jill Kargman’s real life where she found herself “odd mom out” in the elite New York social circle she lives amongst.  In a world where wealthy is worshiped, to have less financial means than your peers makes you an oddity.  It leads to sharp comedy that pokes fun at this crazy world of excess and elitism.  “Odd Mom Out” premieres June 8th on Bravo.

That is a wrap on Day 9 at TCA Winter 2015.  Look for more upcoming snapshots from TCA on the new shows and TV specials coming up for Winter/Spring 2015 here at Seat42F.com.