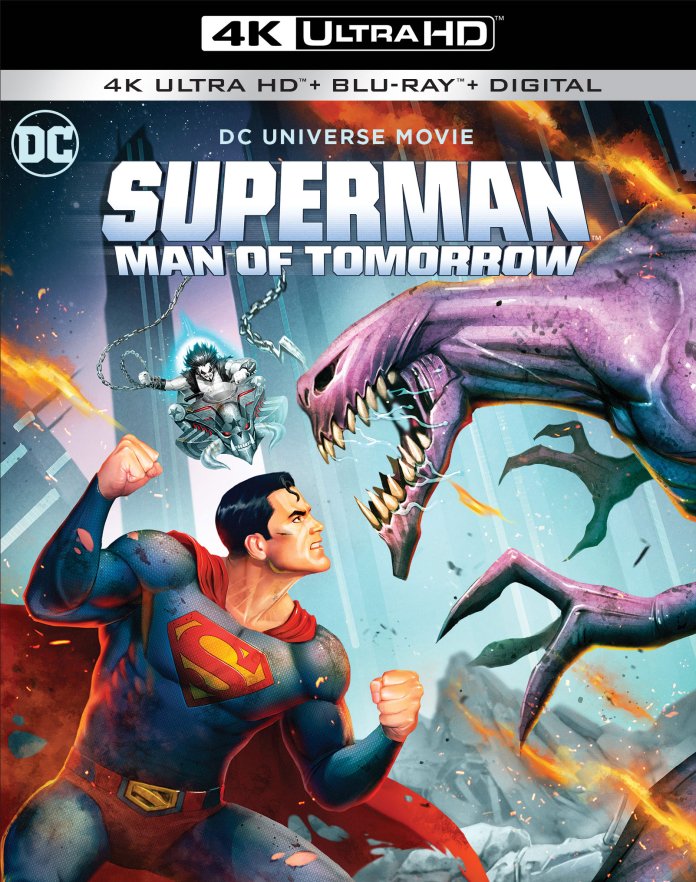 Daily Planet intern Clark Kent takes learning-on-the-job to new extremes when Lobo and Parasite set their sights on Metropolis in Superman: Man of Tomorrow, the next entry in the popular series of DC Universe Movies. Produced by Warner Bros. Animation and DC, the feature-length animated film will be released by Warner Bros. Home Entertainment on Digital starting August 23, 2020, and on 4K Ultra HD Combo Pack and Blu-ray Combo Pack on September 8, 2020. Order due date is August 4, 2020.

It’s the dawn of a new age of heroes, and Metropolis has just met its first. But as Daily Planet intern Clark Kent – working alongside reporter Lois Lane – secretly wields his alien powers of flight, super-strength and x-ray vision in the battle for good, there’s even greater trouble on the horizon. Follow the budding hero as he engages in bloody battles with intergalactic bounty hunter Lobo and fights for his life to halt the attack of power-hungry alien Parasite. The world will learn about Superman … but first, Superman must save the world!

Superman: Man of Tomorrow introduces a new producing vision to the DC Universe Movies series, which now numbers 41 films over its 13 years of existence. Supervising Producer Butch Lukic has a rich pedigree in DC animated productions, serving as producer on Constantine: City of Demons, Justice League Action and the Batman Unlimited franchise, as well as directing episodes of Justice League, Batman Beyond and Beware the Batman. Lukic brings a new visual aesthetic to Superman: Man of Tomorrow that departs from the animation styles – of previous producers Bruce Timm (23 films) and James Tucker (17 films) – thus far represented in the DC Universe Movies.

“Superman: Man of Tomorrow is an inspiring retelling of the DC Universe Movies’ backstory for The Man of Steel, taking the audience to his early days as an intern at the Daily Planet – and his beginnings as a learning-on-the-job DC Super Hero,” said Mary Ellen Thomas, Warner Bros. Home Entertainment Senior Vice President, Originals, Animation and Family Marketing. “Darren Criss and Zachary Quinto have wholeheartedly embraced their roles as Superman and Lex Luthor for this film, and the end result is a special addition to canon of films that every Superman fan will want to add to their collection.”

Lobo: Natural Force of Chaos (New Featurette) – He’s the rude, crude, galactic bounty hunter who has been more than a thorn in the side of DC’s greatest heroes. This is a full throttle look at Lobo.

Martian Manhunter: Lost and Found (New Featurette) – This is the personal journey of J’onn J’onzz. A stranger in a strange land who emerges from the shadows as a force for peace and justice.

Look Back: Justice League vs. The Fatal Five (Featurette) – The Earth’s future hangs in the balance when the Justice League faces a powerful new threat – the Fatal Five. Superman, Batman and Wonder Woman seek answers as the time-traveling trio of Mano, Persuader and Tharok terrorize Metropolis in search of budding Green Lantern, Jessica Cruz – whom they need to be able to free remaining Fatal Five members Emerald Empress and Validus in order to carry out their sinister plan. But the Justice League discover an ally from another time in the peculiar Star Boy – brimming with volatile power, could he be the key to thwarting the Fatal Five? An epic battle against ultimate evil awaits!

Look Back: Superman/Batman: Public Enemies (Featurette) – Based on the popular Jeph Loeb/Ed McGuinness comic series/graphic novel, the film finds United States President Lex Luthor using the oncoming trajectory of a Kryptonite asteroid to frame Superman and declare a $1 billion bounty on the heads of the Man of Steel and his “partner in crime,” Batman. Heroes and villains alike launch a relentless pursuit of Superman and Batman, who must unite – and recruit help – to stave off the action-packed onslaught, stop the asteroid, and uncover Luthor’s devious plot to take command of far more than North America.

From the DC Vault: Superman: The Animated Series, “The Main Man, Part I”

From the DC Vault: Superman: The Animated Series, “The Main Man, Part II”

Superman: Man of Tomorrow will also be available on Movies Anywhere. Using the free Movies Anywhere app and website, consumers can access all their eligible movies by connecting their Movies Anywhere account with their participating digital retailer accounts.

DIGITAL DISTRIBUTION ELEMENTS
On August 23, 2020, Superman: Man of Tomorrow will be available to own in high definition and standard definition from select digital retailers including Amazon, the Apple TV app, FandangoNOW, PlayStation, Vudu, Xbox and others. On September 8, 2020, Superman: Man of Tomorrow will be made available digitally on Video On Demand services from cable and satellite providers, and on select gaming consoles.

SUPERMAN and all related characters and elements are trademarks of and © DC. © 2020 Warner Bros. Entertainment Inc.