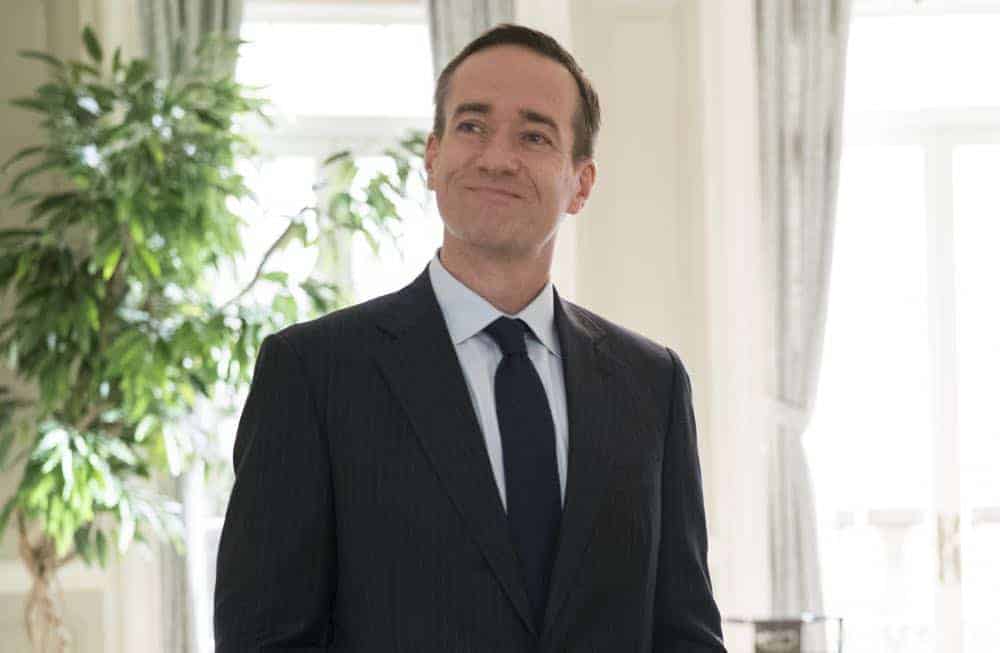 In the latest drama series from HBO, SUCCESSION revolves around the intertwined lives of a media family and tribulations they suffer and endure as the family patriarchy begins to dissolve. Getting a seat at the table and personal view of the Roy family and their media empire is one of the company’s upward-rising executives, superbly portrayed by Matthew MacFadyen. In an exclusive interview, Matthew previews what role his character Tom has to play in this modern tale of greed and despair.

Talking about your new limited series for HBO, SUCCESSION. What can you tell me about what drew you to it? Why did you want to work on this project?
MATTHEW: Lots of reasons, really. I was keen to do a TV show in the U.S. First of all, it was just such a brilliant thing to read. It was so fantastically well-written by the very talented Jesse Armstrong. And I just wanted to be a part of it when I read it. And also, it was shooting in New York, and it was an HBO show, so it meant that it wasn’t gonna be 20 odd episodes like a network show. Sometimes, if you look at the practical considerations as well because I live in the U.K. and have a family. I’ve been lucky that I managed to be part of it. And also, I hadn’t played an American onscreen before, so that was a new thing. Yeah, it was good. Really, I had such fun doing it.

How would you describe your character of Tom? We know he works for the family company and all, but who is he in your mind?
MATTHEW: [Laughs] He’s an idiot. Well, maybe that’s a little unfair. He doesn’t think he’s an idiot. I think he’s okay, he has a big ambition. He goes out with Logan Roy’s daughter Siobhan (Shiv), which is very exciting for Tom. I think he’s in love with her, but also it’s very exciting because he’s near the power. He’s not without ambition and stuff. He’ll also done well. I’m so excited, he’s from Minnesota. He’s a little more down-to-earth, maybe a little less sophisticated than the Manhattanites like the royal family and her. He’s not the same … doesn’t come from the same kind of well. But he’s interesting. He’s a nuanced character. It was such fun.

What does Shiv see in him? If he’s kind of the “idiot with ambition” in the firm. What does she see? Does she see a partner that she can work with, or is it something more?
MATTHEW: I asked the same question. I think they make each other laugh, and I think they’re attractive. You saw, they kind of rub along really well, and in a way, it sort of works. Maybe he’s punching above his weight. She perhaps is looking because — well, I don’t know. Somehow, it sort of works. I think he’s probably less irritating to her than he is to other people.

The Roy family has built this media empire, but it strikes me that they’re a family in disarray. They don’t seem to be a cohesive working unit. I mean, it’s probably one of the more dysfunctional families I’ve seen portrayed on screen. How do they function together? It seems like they don’t function.
MATTHEW: Yeah, they’re really are. I suppose if the show is interesting, and dramatic, and fascinating, it’s because so many families don’t [function]. Or if they do, then it’s a sort of triumph. Getting their own love, and clarity, and a bit of everything. It’s terribly relatable because they’re all so saucy. They’re all so — not venal, but really strange, screwed up and with odd priorities. They’re trying to grow the family firm, and you sort of think, do you care about any of these people? Well, I think, ultimately, you do in a sort of weird way and, hopefully, you’re horrified by it enough to keep paying attention.

It’s kind of like going to the zoo — you’re watching them in their element.
MATTHEW: [Laughs] Exactly, exactly, yes.

What was it like for you to work with Brian Cox, who portrays the Roy patriarch of this world?
MATTHEW: Brian, I know him. We did a film called. “The Reckoning.” It had Paul Bettany, a very young Tom Hardy, and Willem Dafoe. Anyway, we did this film, and we met then. So I have I bumped into him a bit. He’s lovely and was very nice. I didn’t have an awful lot to do with him. Well, bits and pieces, but, he took the cake. Tom’s desperate for Logan’s approval. Desperate. And Logan doesn’t really give him much. So that was all good fun. It was just a really lovely cast, and, my god, a talented cast. Everyone’s so good and really wonderful people. So exciting. It felt like something an old-fashioned company. We’d just have these very long songs. It was a real ensemble feeling. So, yeah, good fun.

You said you wanted to do more work in the United States. Is this gonna be the first of a series of new projects for you over here, or is it just kind of something you’re dabbling in for the moment?
MATTHEW: Just dabbling. I mean, I don’t do anything but dabble. I don’t have any plan. I think most actors don’t. I think the things you can do is: not do things. Don’t try and do the same things you’ve been doing and get further avenues. So it’s really been a breath of fresh air, playing an American, doing a TV show, and getting the experience here. They’re all new things. For an actor, that’s kind of great. Otherwise, it can become a bit stale, always playing the same time of part, all the same media. And it’s just fun filming in Manhattan, my god.

You also have another film coming up: “The Nutcracker and the Four Realms.” What was the appeal for that project for you?
MATTHEW: That was just a lovely script. I play Clara’s dad, so I’m in the beginning and the end. So I miss the eight months of green screen in the middle. Very pleasant, a very nice job. I don’t remember much about it, to be honest. Apart from it was very nice. And I had to do a bit of dancing. [Laughs] I hope that they edit around that.

And you also just appeared in HOWARD’S END.
MATTHEW: And I had a beard, yes. That was a lovely job.

You have quite an experience of different variety of genres, of things you’re working on right now. Do you just pick something out of a big pile and go “That’s what I’m working on,” or is there kind of like a theme to the madness of how you select your projects?
MATTHEW: If it feels different and fresh, then I should jump in. HOWARD’S END was interesting, because I hadn’t planned to do another period drama. But it was so exciting, and so well-written, and such a great cast, that I couldn’t say no. It was just thrilling. And I’m so glad. And I feel very lucky that I was, again, you know, offered that.

What has surprised you about your career so far?
MATTHEW: I think, probably like a lot of actors, it’s a funny business. There’s a lot of uncertainty, even if you’re well-known. Now and again, I feel maybe surprised that I’m still going. Not really. I’m proud of it. I still really love doing it, so I feel very pleased about that.

We have certainly had a lot of fun watching you in your variety of roles. It’s been a really interesting career that you have chosen.
MATTHEW: That’s nice. It’s very gratifying when people enjoy it. Sometimes you sort of think, “What am I doing?” But I get lectures and feedback from people saying, “it’s really wonderful seeing stories onstage or on film or television.” It’s enough. It’s important.

To get a chance to see Matthew in his latest role as a man caught up in the drama surrounding a media empire on the brink of implosion, be sure to tune in for the premiere of SUCCESSION, the 10-episode event series that premieres on Sunday, June 3rd on HBO.