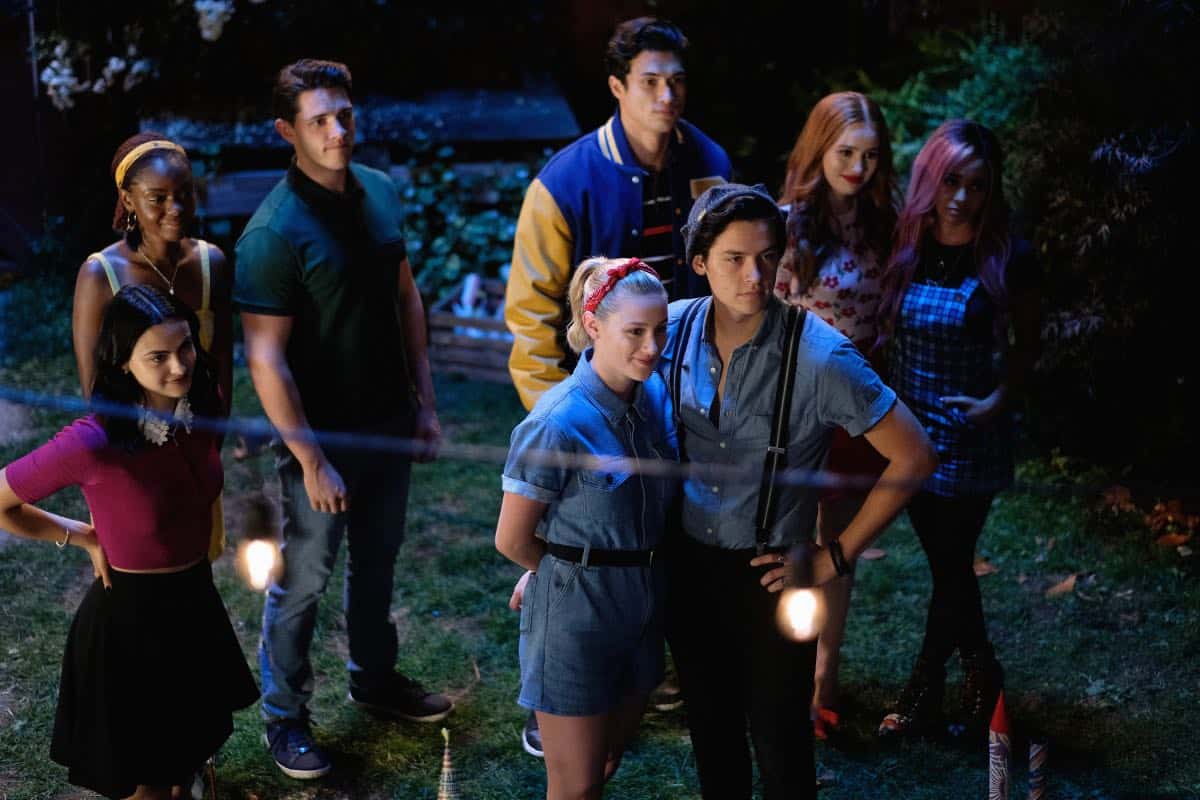 The third season of RIVERDALE began at the end of summer vacation, with Archie’s trial for a murder he didn’t commit, orchestrated by Hiram Lodge, building to a shattering conclusion —Archie (KJ Apa) being sent to juvenile detention — even as a new threat reared its head in Riverdale: The Gargoyle King. A figure of myth inspired by the role-playing game Gryphons and Gargoyle, the Gargoyle King started claiming sacrificial victims, beginning with Dilton Doiley! As Betty (Lili Reinhart) and Jughead (Cole Sprouse) investigated the deadly game’s origins (with their parents, twenty years earlier), Veronica (Camila Mendes) worked ceaselessly to get Archie out of juvie, where he was forced to bare-knuckle box for survival.

She finally succeeded in breaking Archie out, but with Hiram (Mark Consuelos) still gunning for him, our red-headed hero broke up with Veronica and headed out of town with Jughead, seeking asylum with Jughead’s Serpent mom Gladys Jones. With Archie and Jughead out of the way, Hiram’s criminal takeover of Riverdale continued, with his “candy-making” producing a terrifying side-effect in the students of Riverdale High — inexplicable, stress-provoked seizures — which prompted Hiram’s wife Hermione (Marisol Nichols) to order the town to be quarantined. When the quarantine was lifted, the threats to Riverdale had multiplied. The Gargoyle King was still claiming victims; the cult-like Farm Alice Cooper (Madchen Amick) had joined was indoctrinating new members left and right, including Kevin Keller (Casey Cott); and Hiram and Gladys found themselves vying for control of the town’s drug-trade — with Veronica and her speakeasy, and new beau Reggie Mantle (Charles Melton), caught in the middle. When a haunted and hunted Archie returns to Riverdale, he finds his beloved town on the brink of collapse.

Penelope Blossom has opened a brothel. Cheryl Blossom (Madelaine Petsch) and her girlfriend Toni Topaz (Vanessa Morgan) have started a gang to challenge the Southside Serpents — the Pretty Poisons. No one is safe, not even kingpin Hiram Lodge, who is shot by none other than new Sheriff FP Jones (Skeet Ulrich)! He survives, barely. And meanwhile, the mysteries surrounding Gryphons and Gargoyles deepen, drawing in all of our characters, including the enigmatic cult-leader Edgar Evernever and his daughter Evelyn. Resident chanteuse Josie McCoy (Ashleigh Murray) leaves town just as the endgame begins:

With Veronica and Archie (training to be a boxer) teaming-up to take down Hiram Lodge once and for all, even as Betty exposes the Farm’s horrific truths and Jughead zeroes in on the Gargoyle King’s true identity. With one deadly round of Gryphons and Gargoyles left to play, will Archie, Betty, Veronica, and Jughead survive the night and make it to Senior Year?