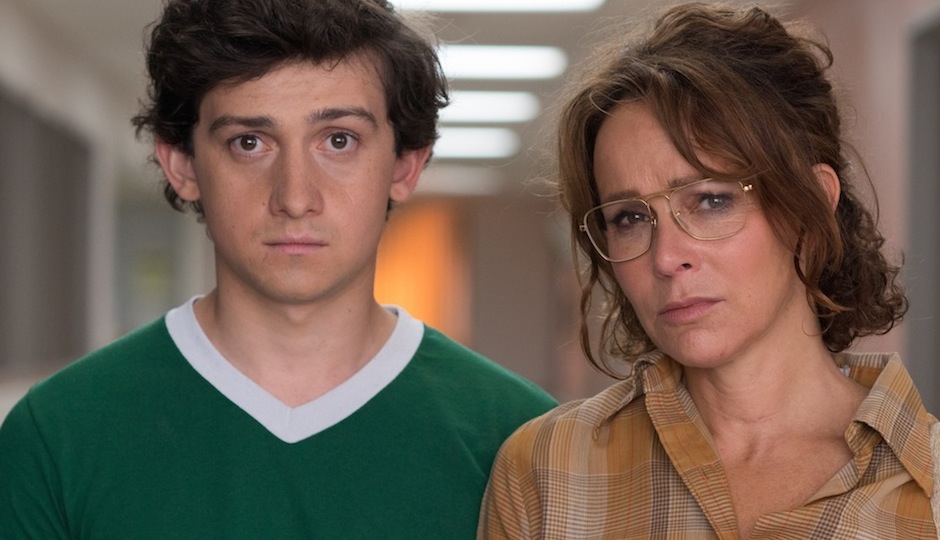 Amazon’s newest half hour series is called RED OAKS, and it premiered today on the streaming service. Set at a country club in 1985, it’s a coming-of-age sex comedy, just like many of the movies of that era. In the summer before college, several teenagers hang out and hook up, mentored by adults who are not the best role models.

The protagonist of RED OAKS is David (Craig Roberts, Submarine), who bristles against his dad’s (Richard Kind, Spin City, Gotham) desire for him to become an accountant. Looking at the messed up marriage of his father and mother (Jennifer Grey, Dirty Dancing), David sees a life he doesn’t want, and so gets a job as an assistant to the tennis pro at the club, Nash (Ennis Esmer, The L.A. Complex).

Nash is probably the most interesting character on the show. Nearly forty years old, he has managed to use a failed turn as a pro athlete to carve out the life he wants at the club. He’s not exactly a good role model for David, but he does occasionally give good advice, and at least he cares about his charge.

RED OAKS is rounded out by other familiar personality types. Paul Reiser (Married, Mad About You) is terrific as the angry club president. Alexandra Socha (The Big C) is his daughter who turns David’s head, despite the fact that David is in a relationship with a yoga instructor played by Gage Golightly (Teen Wolf). There’s David’s schlubby friend, Wheeler (Oliver Cooper, Californication), the jock, Lefevre (Nick Bailey, A Most Violent Year), and the jock’s girlfriend that Wheeler wants, Misty (Alexandra Turshen, Boy meets Girl). Plus, there’s an older jerk who will probably steal away David’s girl played by Josh Meyers (The Awesomes), brother of Seth.

If that sounds like the cast of an 80s movie you love, that’s because RED OAKS is designed to slide right into that genre. It isn’t making fun of those types of movies like Wet Hot American Summer does; it is one of those movies, just in episodic form. The characters take themselves seriously and the plot is earnest. And, by comparison to its peers from twenty years ago, RED OAKS is pretty good, even if it doesn’t do anything to set it apart from those other works. It’s neither better nor worse, which is pretty good.

The main story will probably be about the sexual activities of the younger characters. After all, they are at the age where they are finding themselves and, in the case of the sheltered or dorky guys, finally getting to interact with the opposite sex. That David already has a girlfriend he sleeps with actually sets him a little apart from what one might expect, but his personality still fits within the virgins that generally appear in pieces like this.

I haven’t yet decided if I’m going to watch RED OAKS past the first episode. Because it doesn’t break the mold, I kind of feel like I’ve already seen it. At the same time, there are not any glaring flaws (other than David’s girlfriend both professing how perfect they are and looking at someone else), and this cast does make me care about the characters. So whether you should tune in or not really comes down to how much you enjoy this particular premise.