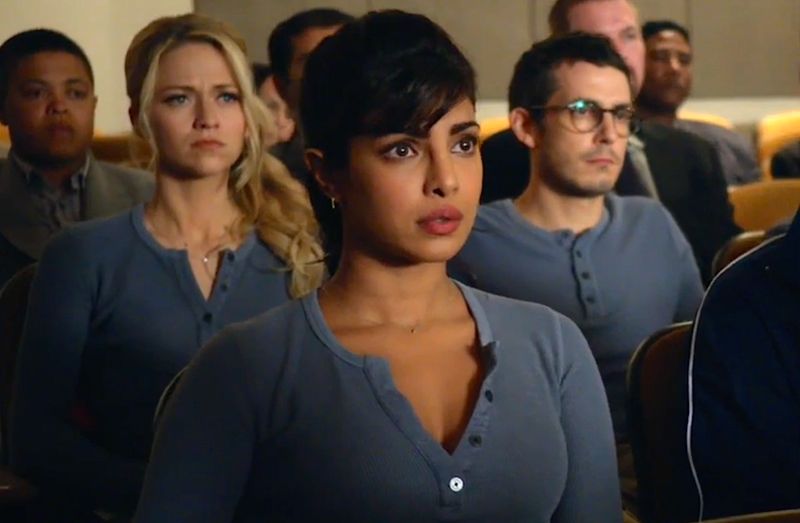 Joining veteran Once Upon a Time and new drama Blood & Oil on Sunday nights is QUANTICO. This drama is about a group of FBI recruits training at the famous academy in Virginia. There is a mildly non-linear story structure and plenty of mystery, as well as soapy personal drama as we get to know the characters. Think of it as Grey’s Anatomy meets How to Get Away With Murder, with just a touch of Alias tossed in.

QUANTICO has an ensemble cast, rather than a single lead, but if I were to name the most important person in the pilot, I’d go with Alex Parrish (Priyanka Chopra, Barfi!). Sneaking away from her family to be a member of Quantico’s newest class, Alex is also the subject of the flash forwards that take place in the aftermath of a terrible event nine months in the future, or most likely, the end of the first season. She is intelligent, brave, comfortable with herself, and interesting. She’ll do as someone to root for.

Joining her in classes are: Ryan Booth (Jake McLaughlin, Believe), her love interest who is much too curious about her; Nimah Amin (Yasmine Al Massri, Crossbones), a Muslim woman who is taking advantage of scoring the lone single dorm; Shelby Wyatt (Johanna Braddy, UnREAL), a pretty girl who is very good with guns; Simon Asher (Tate Ellington, The Mindy Project), a busybody gay; and Caleb Haas (Graham Rogers), who has his peers wondering how he got in. There is a seventh member at first, too, but since ABC has not included him in the cast photos, I think it’s safe for me to say he will not remain part of the group, though I won’t spoil why.

Now, a lot of those descriptions are simplistic, but the characters are not. Everyone in QUANITCO is hiding something that’s not obvious, from each cadet, to the administrator, Miranda Shaw (Aunjanue Ellis, The Mentalist), to the instructor (Josh Hopkins, Cougar Town). Each member of the cast quickly begins finding out at least one other person’s secrets, but QUANTICO thrives on what characters don’t know, hard as that might get to track, and I don’t expect anyone will come out into the open soon. Expect the unexpected to happen on a regular basis.

QUANTICO is definitely a sudsy soap, and that’s OK. Personal issues are as much as part of the story as stopping terrorism, and there will surely be numerous hook ups and crushes, besides what is shown in the pilot. It’s a juicy guilty pleasure series, which also has a pretty compelling story, and just enough action.

I would call the show fast-paced, but not too much so. A lot happens, and more will keep happening, but the writers don’t blow everything right away, and it doesn’t move so quickly that developments don’t make sense. It strikes that balance that makes for layered entertainment without requiring too much work. It’s a feat I’ve seen far too many dramas fail at lately, and it’s nice to see one do better.

Which is not to say it’s my new favorite show. The soapy nature does keep the quality down at a mediocre level. I enjoyed this pilot, but there are much more complex dramas with far better actors out there. Still, for ABC, it’s pretty decent, and within its Sunday night lineup, paired with Once Upon a Time and Blood & Oil, it is the best, even if it’s not quite the most original, of the three. I’m willing to give it a couple more hours to see if it can kick itself up a couple of notches, or if it will begin losing steam quickly. Either are realistic possibilities for this show.