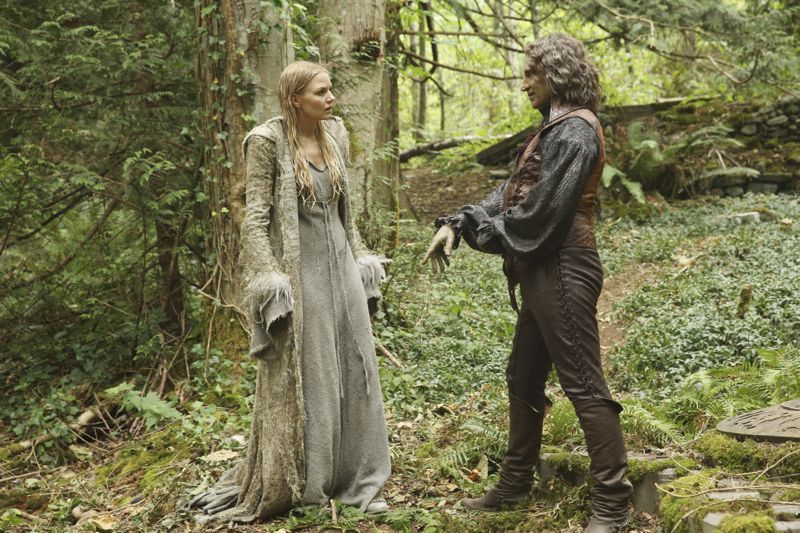 ONCE UPON A TIME, there was an uneven series that lured its fans into false senses of security with excellent season openers and an occasional good run, but constantly disappointed in the end. This ABC drama returned for a fifth season tonight, and while the opener, “The Dark Swan,” is pretty promising, I don’t hold out high hopes that it will be able to maintain such quality, especially as there are worrying signs present.

As “The Dark Swan” begins, Emma (Jennifer Morrison) finds herself in the Enchanted Forest, haunted by the Dark One (Robert Carlyle) inside of her. She struggles to resist, remembering that, as a child (Mckenna Grace, The Young and the Restless), she was warned not to pull the sword from the stone. Since she will soon be in Camelot, this is wise advice to keep in mind. Oh, and she has a run in with wild, brave (hehe) red-head Merida (Amy Manson, Atlantis).

I really like the way Emma is handled in this episode. I was worried she’d immediately go evil, but instead, she really tries to keep herself in check with Merida, which wouldn’t be easy for the best of people. Emma may very well embrace her role as the Dark One, as the end of the hour indicates, but at least we know the Emma fans love is inside somewhere, doing her best to keep the power at bay.

Quick side note, why does ONCE UPON A TIME do another time jump and memory wipe? They’ve done it before, and I feel like they’re repeating themselves by doing it again. I understand it’s a hook meant to keep viewers coming back, but it has to organically fit in the story for it to not come across as a cheap stunt. It does not gel all that well in “The Dark Swan.”

Emma’s internal struggle raises an interesting point as it pertains to Rumple, the previous Dark One. Rumple manages to be good and redeem himself prior to his death in season three, but then reverts to a villain when he is brought back. If the Dark One’s hold is so strong that it cannot be overcome, how did Rumple manage to stay a hero for so long? And why didn’t ONCE UPON A TIME show us his warring as he fell back into old patterns?

An arc for Rumple similar to what Emma is going through now would have made the entire show make more sense and stave off some of the negative reviews I’d written in the past. The writers should take the opportunity no to bring this up, and even if it’s too late to entirely make up for that past mistake, it would still help a bit with the overall impression of the series.

Of course, the rest of our people will not let Emma sweat this out on her own. It’s a bit convoluted how it all comes about, but the eventual take away is that Hook (Colin O’Donoghue) allows Zelena (Rebecca Mader) to open a portal (and then she is recaptured), which Regina (Lana Parrilla) redirects to Emma. Mary Margaret (Ginnifer Goodwin), David (Josh Dallas), Henry (Jared Gilmore), Robin (Sean Maguire), and a surprising number of recurring players, including Granny (Beverly Elliott) and Leroy (Lee Arenberg), hitch a ride with our core cast in Granny’s diner on a twister.

The way the heroes get to the Enchanted Forest is fun and clever, though one wonders if it’s all not just a bit too much. Was it really necessary to bring the whole diner and get it operational again? I’m also super excited to see the dwarves and others come along, as Leroy rightly points out that they’ve been left out of the loop for far too long, but will they be well-used? And it’s weird they bring a baby with them, isn’t it?

I’m excited about Emma’s arc, a meatier role for supporting players, and the inclusion of King Arthur (Liam Garrigan, The Pillars of the Earth) and his realm. I’m worried about the amount of characters drawn unnecessarily into the primary arcs and that ONCE UPON A TIME has a track record of good starts that they can’t maintain. This doesn’t stop “The Dark Swan” from being a mostly enjoyable hour, but does not necessarily bode well for upcoming installments.