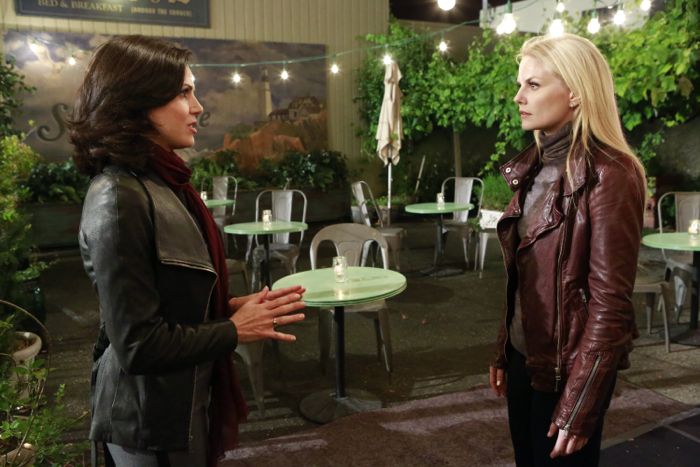 WARNING: There are spoilers below, but as always for unaired episodes, I don’t give away anything too major.

ABC’s ONCE UPON A TIME is back this weekend, kicking off a whole new arc related to the recent blockbuster movie Frozen, beginning with the episode “A Tale of Two Sisters.” While last spring’s Oz arc didn’t live up to expectations, the previous fall’s Neverland run was nothing short of spectacular. We’re only one episode in to the new story, but as far as first impressions go, this is a solid one, favoring the latter’s quality, rather than the former’s.

As some fans have been eagerly anticipating, “A Tale of Two Sisters” brings Elsa (Georgina Haig, Fringe) and her sibling, Anna (newcomer Elizabeth Lail), into ONCE UPON A TIME. And there is no shortage of the girls in the premiere. We see them in multiple time periods and get Elsa in both their home and in Storybrooke. Whatever this immediate plot entails, it will have plenty of them.

The main portion of Elsa and Anna’s scenes are set in their kingdom after the end of the movie. So if you haven’t seen Frozen, you may want to check it out this beforehand to catch you up on who these people are. ONCE UPON A TIME may eventually reveal enough to follow along without prior knowledge, but the scenes with Elsa, Anna, Kristoff (Scott Michael Foster, Greek), Sven (played by an actual reindeer, hilariously used!), and Pabbie the Troll (CGI, voiced by John Rhys Davies from The Lord of the Rings) may seem confusing to those who don’t already know them.

By beginning after the movie (spoiler for those who haven’t seen Frozen!), Elsa isn’t a villain the way she is for much of the film. She isn’t completely good either, though, as she is still struggling to control her powers. Suddenly dropped into a strange land, and likely on a very important mission viewers can guess at, it makes sense for her to panic and perhaps get a bit defensive. I’m not quite sure yet how she’ll fold in (or not) with the Storybrooke residents, but there is definitely the potential for conflict here, and I will say the earliest, indirect encounters don’t exactly go smoothly.

Some have criticized ONCE UPON A TIME in the past for periodically giving too much screen time to guest stars and not developing the core cast enough. While “A Tale of Two Sisters” definitely has a lot of Frozen fare, it does provide good, character-driven scenes to many of the primary players, too, striking what I feel is a respectable balance between the two camps.

Obviously, the biggest question after last spring’s finale is if Regina (Lana Parrilla) will slip back into her evil ways. This question is addressed a lot in the hour, but not answered this week. She is definitely tempted to smite Marian (Christie Laing), who is long believed dead until she suddenly shows back up to claim her husband, Regina’s boyfriend, Robin Hood (Sean Maguire). She even recruits an old henchman (yay!) to help her out. But Regina is no longer just the Evil Queen, and slipping back to her old ways doesn’t come as naturally as it once did. She also has a perhaps-unexpected ally trying to save her. Parrilla gives an as-usual fantastic performance as Regina struggles with her warring motivations.

Those who prefer the romantic side of things should be happy with “A Tale of Two Sisters.” There is some great stuff between Emma (Jennifer Morrison) and Hook (Colin O’Donoghue), and some even better stuff between Rumple (Robert Carlyle) and Belle (Emilie de Ravin). The latter’s honeymoon becomes quite fairy tale-esque in a scene that will make many Beauty and the Beast fans smile.

Both Rumple and Regina also kick off some extremely interesting arcs, one relating to another familiar tale not yet covered in ONCE UPON A TIME, and the other diving deeper into the base mythology of the show, exploring something not dwelled upon for some time. These are promising, excellent threads that should hopefully pair nicely with the Frozen line, succeeding in keeping everyone important busy in the coming season.

As for the announced new main cast member, the Knave of Hearts (Michael Socha) from the spin-off Once Upon a Time in Wonderland, he’s completely MIA in the first episode back. But his name graces the opening credits, so I expect that won’t be the case for long, and there’s still time to hold out hope that he won’t be coming to Storybrooke alone.

In all, ONCE UPON A TIME has a great return to form, beginning a fascinating series of stories and doing justice to the best characters in the show, even while introducing yet another batch of new ones. It’s too early to tell if this fall will rival the show’s Neverland zenith, but it’s got the right ingredients in place to serve the show well, should they be mixed correctly and baked for the right amount of time.