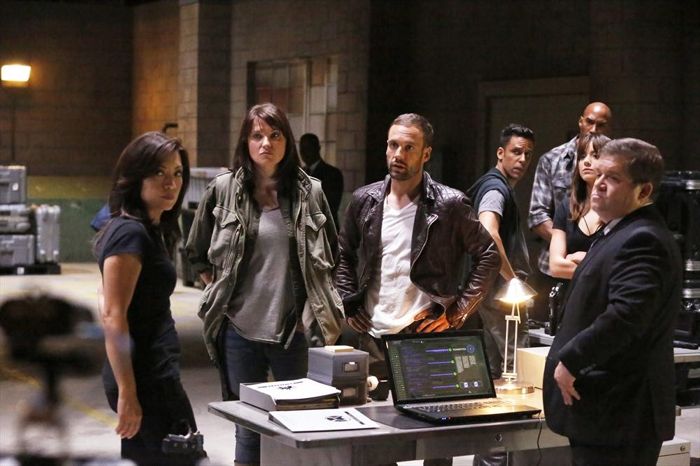 MARVEL’S AGENTS OF S.H.I.E.L.D. is back! Airing last night, the second season premiere, “Shadows,” picks up several months after the shocking events of last spring’s finale. Director Phil Coulson (Clark Gregg) has stepped away from the team to run the entire new S.H.I.E.L.D. agency. Everyone, which includes quite a few more people than the original team, now works out of the secret base known as The Playground. And some characters are much-changed.

The episode begins with a glimpse of Agent Peggy Carter (Hayley Atwell) and the Howling Commandos in 1945, a welcome connection to the upcoming miniseries, Agent Carter, that will air when MARVEL’S AGENTS OF S.H.I.E.L.D. goes on winter hiatus. Peggy and her crew are capturing an artifact from Hydra officer Daniel Whitehall (Reed Diamond, Franklin & Bash, Dollhouse). In the present day, S.H.I.E.L.D. and Hydra (including a still-youthful Whitehall) hunt the same object, which is now controlled by the government and Brigadier General Glenn Talbot (Adrian Pasdar).

The dynamic between the three organizations, S.H.I.E.L.D., Hydra, and the U.S. military, will definitely be giving the show plenty of legs to run on this season. As it stands now, Hydra is winning, with the larger, globally-expansive network, while S.H.I.E.L.D. is rebuilding desperately. One would think it makes sense for the American government to side with S.H.I.E.L.D., but those in charge of the troops, specifically petty Talbot, have been burned when S.H.I.E.L.D. collapsed, and are justifiably wary about getting in bed with them again, especially after such a public campaign against them. It’s an unstable mix, which can only result in entertaining showdowns.

Poor Coulson is stuck in a terrible situation. Not only is he struggling to recruit enough reliable people to help build the organization Fury has entrusted him with, but now he has to look at the bigger picture, which means weighing his personal feelings for his agents against what has to be done in the war game. This means he has to endanger people he cares about, as well as send them into extremely uncomfortable situations they don’t want to be in. Coulson still isn’t a bad guy, but he’s sure to tick off some of our heroes when putting the world ahead of them, which will spark good, authentic drama.

Skye (Chloe Bennet) is now a full-fledged agent, working under the tutelage of May (Ming-Na Wen). That doesn’t mean she’s ready, though, when Coulson sends her to pump Ward (Brett Dalton), imprisoned in The Playground, for information. She’s still deeply wounded by the turncoat, and can’t stomach to look at him long, even as he tries to promise her secrets on her origin. She’s much better at the physical stuff, surprisingly.

Ward is very different now. His driving purpose seems to be his love for Skye, which she is certainly not returning. His suicide attempts and unkempt appearance indicate he’s given up on rejoining Hydra and may not care about it at all, now that his mentor is dead. I’m not sure where MARVEL’S AGENTS OF S.H.I.E.L.D. is going with him, but I’m very glad he’s been kept around and allowed to be a dynamic character. His psychosis is a delicious thing for the actor to play, and he’s doing a fine job of it so far.

Even more startling than the new Ward is Fitz’s (Iain De Caestecker) mental state. We know he’s injured, but for most of “Shadows,” it just seems like he stutters a bit. It isn’t until the end of the episode that viewers are clued in to the fact that Simmons (Elizabeth Henstridge) left the base some time ago, and her appearances in the hour are hallucinations. This indicates far deeper problems, with no one quite trusting Fitz to do his job any more, but still keeping him around out of loyalty. How long will it take Fitz to recover, or will he ever? (I’m going to guess he’ll return to form by mid-season.)

“Shadow” brings a lot of new blood into MARVEL’S AGENTS OF S.H.I.E.L.D., and that’s a good thing. The structure of the show has changed, and by necessity, we need more faces to fill it. Lucy Lawless (Battlestar Galactica, Xena: Warrior Princess) is fantastic as Agent Hartley, and I’m very sad she is killed off so quickly. But we still get another appearance of a Koenig (Patton Oswalt), whom I hope sticks around as much as possible. Triplett (B.J. Britt) deserves a promotion to central cast, a full part of the team by this point. There’s also a mercenary named Lance Hunter (Nick Blood, Trollied) and a mechanic named Mac (Henry Simmons, Man Up, NYPD Blue) in the season premiere.

Interestingly, the ABC press site still only lists the six core main characters, while Blood’s name is in the Starring portion of the opening credits. The way all these new people are handled, it’s easy to be unsure about who’s a main character and who isn’t. However, given Joss Whedon’s connection to the project, I recommend not worrying about that, as he has a tendency to heavily use good performers over a long period of time, even if they are not added to the principal cast.

As you may have surmised from the above review, there’s a lot going on in MARVEL’S AGENTS OF S.H.I.E.L.D. this year, and I feel like I’ve barely scratched the surface. Of note, we also got to see a man who can change his substance, a cool jet that can turn invisible, and more glimpses of the doodle lines crazy Coulson draws. With so many balls in the air, fans are sure to be in for a heck of a fall run, jam-packed with action, story, and continued character development in TV’s current best superhero series, and that’s saying something, given the suddenly-crowded field.