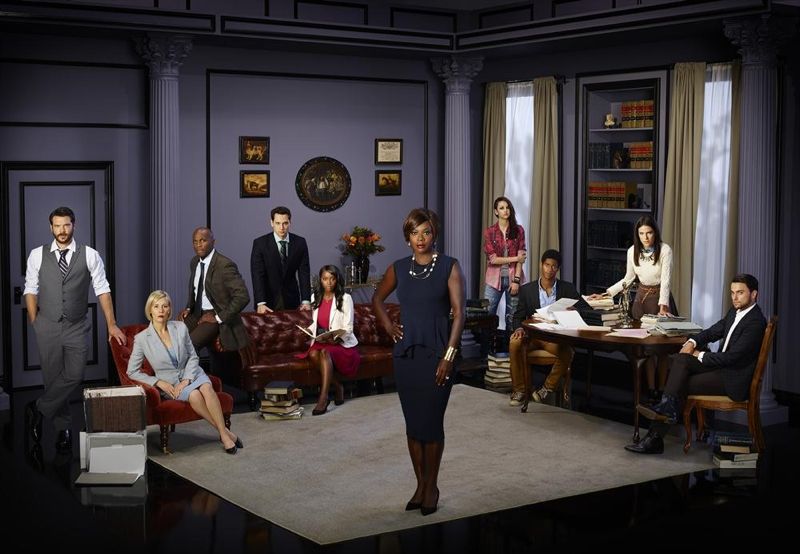 The latest program from Grey’s Anatomy and Scandal creator Shonda Rhimes, premiering this fall, is called HOW TO GET AWAY WITH MURDER. Set at the University of Michigan (which makes for an opening scene sure to upset Buckeyes in my locale of Columbus, Ohio), it follows Professor Annalise Keating (Viola Davis, The Help) and her employees and students as she conducts lessons both in and out of the classroom, as besides being a teacher, she’s also an active, successful lawyer. There’s also a dark, serial mystery wound through the more typical events.

HOW TO GET AWAY WITH MURDER is pretty much a hybrid of what makes Shonda’s other two hits so well-received. It begins with a group of five, inexperienced, competitive hopefuls, just as Grey’s did, working in a power structure headed by Keating, but with a couple of her colleagues in between. There will definitely be sexual relations had between tiers. It also has the fast cuts and serious tone of Scandal, with a long-running story that will not be quickly tied up. This is a pretty solid formula, and one that serves the show well, at least in the pilot, familiar enough to feel comfortable, but definitely different in plot than its peers.

Davis is terrific, of course, showing both Keating’s toughness and her vulnerability, which may or may not be faked, as HOW TO GET AWAY WITH MURDER doesn’t hold one’s hand in explaining itself. She isn’t really likeable, at least not initially. After all, she defends people who are probably guilty of murder, and she has little emotional warmth or compassion for her fellow men. She’s also not exactly monogamous, though her partners may believe otherwise, especially the one she’s married to.

But it’s not all Davis’ show. Equal time is given to the youngsters, making for a very balanced ensemble. Wes Gibbins (Alfred Enoch, the Harry Potter films) stands out as the naïve, ‘good’ guy whom viewers will root for. He is joined by bitchy Michaela Pratt (Aja Naomi King, Emily Owens M.D.), sleazy player Connor Walsh (Jack Falahee, Twisted), snobby Asher Millstone (Matt McGorry, Orange Is the New Black), and quiet Laurel Castillo (Karla Souza, Verano de amor). Besides Wes, only Laurel is sympathetic right off the bat, but it’s an interesting, drama-filled group dynamic that will keep audiences watching, whether or not they respect the characters.

Four of these five get a lot of screen time in a second setting, four months after the events of the rest of the pilot. HOW TO GET AWAY WITH MURDER doesn’t do the lame, over-used thing a lot of series are doing these days of showing the climax of an arc first, then working up to it. Instead, it frequently jumps between the present and the future, with most of the hour in the former, but the latter picked up on consistently throughout. I do wish it had skipped this device, but it does provide a hook for viewers to keep tuning in, and isn’t as annoying as usual.

The pilot ‘present’ also divides its time between introductions of the cast, a case-of-the-week, and a missing girl, whom threads through several people’s scenes, including those of Wes’ new neighbor, Rebecca Sutter (Katie Findlay, The Killing). The last of these is likely going to be the driving force in the initial run, and, I hope, even tie into the future scenes, though the connection is not obvious at the onset. This provides a true entrée for the series, ensuring it’ll go somewhere.

If I have one complaint about this first episode is that does not feature Bonnie Winterbottom (Liza Weil, Gilmore Girls) enough. As a fan of the actress, still sad about her relatively quick death on Scandal, I want to see more from her, and she’s probably the character with the least to do in this installment. Being among the principal cast, I’m sure that will change, as she and co-worker Frank Delfino (Charlie Weber, Buffy the Vampire Slayers) are the obvious bridge between the kids and their boss.

HOW TO GET AWAY WITH MURDER isn’t perfect, but it’s enticing and seems to be heading in the right direction. Both of Rhimes’ previous series took some time to find their legs, and this one doesn’t score high right out of the park, either. However, the elements to make it a great show are all there, and I think it’s more about getting into the meat of the tale, rather than changing anything, that will kick it up a notch.

HOW TO GET AWAY WITH MURDER premieres Thursday, September 25th at 10 p.m. ET.