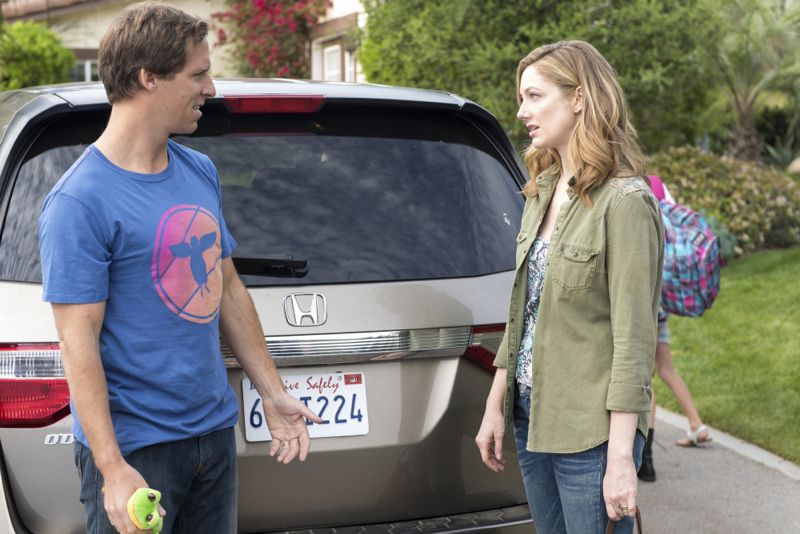 Hot summer nights are back with zanny, ribald and adult comedy on FX.  Returning for Season 2, FX’s comedy series MARRIED invites viewers to peek into the quagmire of challenges faced by Lina and Russ Bowman, whether it is in finding time to be parents for their kids, finding time for each other, or finding time for themselves as their work and parental lives pull at them in a tug-of-war for the few hours a day they each have.  MARRIED believes that life’s comedy comes not from impossible, unrealistic situations, but from the real, everyday challenges we all face and holding a mirror up to each.  Of course, FX’s MARRIED loves to throw its own distinctive spin on it, so they have taken a bit of a no-holds-barred approach to delving into what challenges and colorful folks surround Lina (Judy Greer) and Russ (Nat Faxon).

MARRIED also recognizes that it is not just family commitments and work commitments that entangle our every day lives, but also our co-workers, bosses, and our friends outside of work who all want a piece of our available time as well.  So MARRIED has populated Russ and Lina’s lives with a variety of people, including Russ’ friends A.J. (Brett Gelman) and Jess (Jenny Slate) and has introduced a new boss Gil (Zak Pearlman) along with a new assistant Miranda (Kimiko  Glenn), and the ever-present and larger-than-life Bernie (John Hodgman); and fleshing out Lina’s world is Abby (Sarah Burns), who works with Lina at her new teaching job.

That’s right, Season 2 has taken things up a notch for the financially-challenged and formerly cash-strapped Lina and Russ.  They have a new house and new jobs to pay for the expanding girth of their new home.  But, as they soon find out, more money does not mean less problems — and the demands on their attention and time have only escalated as they rise up in Corporate America and Middle America.

During a special invitation to hangout on set, stars Judy Greer and Nat Faxon talked about the fun new circles that their characters Lina and Russ travel amongst and their own deep love of working on the show:

As Nat previewed, Russ’ new job allows the show to explore what happens when your dream job becomes your worst nightmare.  Russ has scored this awesome job at a graphic design company, where the company creates logos for guys who still embrace their adrenaline-junkie side, but where Russ suddenly finds himself stuck with management responsibilities, which are always easier to dream about than implement.  Everyone always thinks it will be an easy job managing friends, until they find themselves in that exact position and they want to be seen as the bad-guy in enforcing company policies.  But not everything gets to be fun-and-games all day, even when your good buddy is now the boss.  Plus, in Russ’ case, he also has a boss to answer to and his boss Gil is a handful.  Not gifted with common social graces, Gil is socially awkward and it comes out in the worst ways around Russ and around the rest of the office.  So navigating a world where Gil reigns is more than just a little challenging for Russ.  Then oss in the antics by Bernie and A.J.’s inherent desire to button-push, then things get a bit more comedically combustible and, suddenly, Russ’ life is ripe with comedic opportunity.

Similarly, as Judy hinted at, Lina’s life also becomes richer and more inherently dangerous as she embraces a new friend, Abby, who for all her charm is a bit of a trouble-magnet.  Add in the fact that Abby and A.J. hit it off, and the next thing you know, Lina and Russ are finding themselves trying to extricate themselves from the most interesting of predicaments.

So as Lina and Russ Bowman’s worlds have expanded, so do the demands on their time and their attention — and the level of responsibility and level have exponentially risk increased.  Watching them surreptitiously try to balance it all and have it all, typically ends with hilarious results.  It’s the “be careful what you wish for” conundrum.  More money means more responsibility; more friends means more pressures to spend time with them; and more just leads to more.  But, happily, MARRIED embraces all the richness of the challenge of wishing for “more” and how it can backfire spectacularly, while simultaneously providing a truly rewarding outcome.

The lives of Lina and Russ may be entangled and caught up in the rat-race of life, but fortunately for the actors Judy and Nat, they seem to be perfectly delighted with their jobs working on MARRIED.  Each appreciates the ease with which they have fallen into their roles and genuinely loves working with their costars and each other.  Toss in the sprinkling of the wicked humor of MARRIED and they are like kids in a candy store.

Season 2 just ratchets up the octane on the outrageous comedy of MARRIED.  Fans and viewers will want to tune in to see what delicious concoction of life’s unexpected adventures next await Russ and Lina Bowman.  So be sure to tune in for the Season 2 premiere on Thursday, July 16th at 10:30 p.m. on FX.