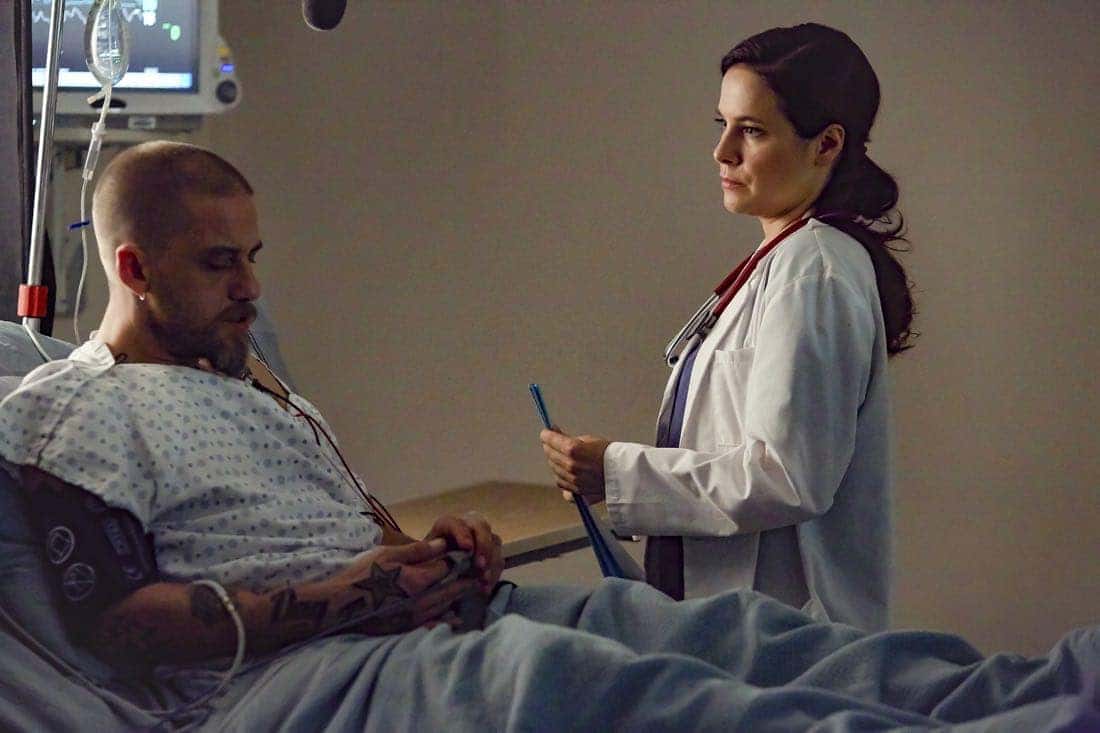 Lifetime ups its premium scripted content with new season greenlights of the critically-acclaimed drama series UnREAL for a fourth season and freshman drama Mary Kills People for a season two, it was announced today by Liz Gateley, EVP and Head of Programming for Lifetime. The renewal of UnREAL comes ahead of its much-anticipated third season, which will debut in early 2018 alongside Mary Kills People. Lifetime’s scripted fare also includes the straight-to-series psychological thriller from Greg Berlanti and Sera Gamble, YOU, starring Penn Badgley and Elizabeth Lail, which begins production this August. In line with Lifetime’s Broad Focus initiative, more than 50% of directors for these series are female, and are predominately produced and written by women.

With three original cable movies ranked in the top four in women 25-54* this year, Lifetime furthers its supremacy in long form storytelling with greenlights of Faith Under Fire and The Simone Biles Story (working title). Grammy® winner Toni Braxton, whose Lifetime biopic Toni Braxton: Unbreak My Heart was the #1 rated cable movie of 2016**, makes her return to the network to star as Antoinette Tuff, a clerical worker who talks down a school shooter in Faith Under Fire from Sony Pictures Television. America’s most decorated gymnast with 19 Olympic and World Championship medals, Simone Biles also signs on for a Lifetime biopic revealing the sacrifices and dedication it took her to become one of the greatest and most celebrated athletes in the world.

“It’s an exciting time for all women when a female-directed movie, featuring a female superhero, tops the summer box office,” said Gateley of today’s announcement. “In television, Lifetime is the top tier destination for hiring female writers, directors and producers and we continue to celebrate the everyday, real-life heroes in our programming.”

UnREAL gives a fictitious behind-the-scenes glimpse into the chaos surrounding the production of a hit dating competition program, Everlasting. UnREAL is led by flawed heroine Rachel Goldberg (Shiri Appleby), renowned for her skills manipulating her relationships with, and among, the contestants to get the vital dramatic and outrageous footage that the program’s dispassionate executive producer, Quinn King (Emmy®-nominated Constance Zimmer), demands. Season three features Everlasting’s new feminist “suitress,” Serena (Caitlin FitzGerald, Masters of Sex), who is determined to have her pick of eager male suitors.Co-created by Marti Noxon and Sarah Gertrude Shapiro and produced by A+E Studios, seasons three and four are helmed by showrunner and executive producer Stacy Rukeyser. UnREAL season three is also executive produced by Shapiro, Robert M. Sertner, Sally DeSipio, Peter O’Fallon and David Solomon. UnREAL is the first scripted series fully produced and distributed by A+E Studios. A+E Networks also handles global sales for UnREAL, which has been sold and airs in more than 100 territories.

Single mother Mary Harris (Caroline Dhavernas) is an ER doctor by day, but by night, she and her partner Des (Richard Short), a former plastic surgeon, moonlight as underground angels of death helping terminally ill patients slip away on their own terms. So far Mary has managed to stay under the radar; but death is hot, business is booming, and her double life is getting complicated. When her world starts to unravel, Mary realizes she’s going to have to fight dirty if she’s going to stay in the killing game. Jay Ryan returns as Ben Wesley. Mary Kills People is executive produced by Tassie Cameron, Amy Cameron, Jocelyn Hamilton and Tecca Crosby. The series will be directed by Kelly Makin, Norma Bailey and David Wellington with Holly Dale as Co-Executive Producer. Tara Armstrong created the series and is Executive Producer and writer. Additional writers include Tassie Cameron, Morwyn Brebner, Lara Azzopardi and Marsha Greene. Mary Kills People is produced by Entertainment One and Cameron Pictures Inc., in association with Corus Entertainment, and with the financial participation of the Canada Media Fund, the Ontario Film and Television Tax Credit and the Canadian Film or Video Production Tax Credit.

Starring Penn Badgley, YOU is a 21st century love story that asks, “What would you do for love?” When a brilliant bookstore manager crosses paths with an aspiring writer, his answer becomes clear: anything. Using the internet and social media as his tools to gather the most intimate of details and get close to her, a charming and awkward crush quickly becomes obsession as he quietly and strategically removes every obstacle – and person – in his way. YOU will also star Elizabeth Lail, Zach Cherry and Luca Padovan. YOU is from Berlanti Productions and Alloy Entertainment in association with Warner Horizon Scripted Television and A+E Studios. YOU is written by executive producers Greg Berlanti and Sera Gamble and based on Caroline Kepnes’ best-selling novel of the same name.

Seven time Grammy® Award winner Toni Braxton stars as Antoinette Tuff, a struggling single mom from Georgia who heroically averted a tragedy, saving hundreds of lives when she convinced a deranged gunman who stormed an elementary school to surrender. On August 20, 2013, shortly after arriving to work at the Ronald E. McNair Discovery Learning Academy in Decatur, Georgia, Antoinette (Braxton) the school’s bookkeeper, was in the front office when Michael Hill (Trevor Morgan, Abducted), a young man with a history of mental illness, snuck in, armed with an AK-47 and hundreds of rounds of ammunition. As the school went into lockdown, Antoinette was left alone with Trevor, who repeatedly threatened to kill everyone. Showing enormous courage and empathy, along with nerves of steel, Antoinette convinced Trevor to surrender by using her own life struggles to connect with him. Antoinette’s faith in God guided her through the toughest moments of her life, ultimately preparing her for that fateful day. Yaya DaCosta (Whitney) portrays Kendra McCray, the 911 operator relaying messages to police on the scene from Antoinette.

Produced by Sony Pictures Television and based on the book Prepared for a Purpose: An Inspiring True Story of Faith, Courage and Compassion in Crisis by Tuff and Alex Tresniowski, Faith Under Fire is executive produced by T.D. Jakes (Heaven is for Real), Judith Verno (Masters of Sex), Derrick Williams (Miracles from Heaven), Toni Braxton and Craig Baumgarten (Toni Braxton: Unbreak My Heart). Emmy nominee Vondie Curtis Hall (Abducted: The Carlina White Story) directs from a script written by Laura Harrington and Stephen Kay.

Based on her book, Courage To Soar: A Body in Motion, A Life in Balance, the biopic follows Simone Biles through her sacrifices and hard work that lead her to win 19 Olympic and World Championship medals and cemented her stake as one of the greatest gymnasts of all-time. Biles’ journey from foster care to the Olympic podium is full of life experiences that serve as an inspiration for every little girl with a dream. The Simone Biles Story (working title) is executive produced by Howard Braunstein, Simone Biles, Janey Miller and Kyell Thomas for Octagon and is written by Kelly Fullerton.

The Watcher in the Woods – Premieres October 21

Executive producer and director Melissa Joan Hart reimagines the ‘80s cult classic starring Academy Award winner Anjelica Huston as Mrs. Aylwood, the distraught mother whose daughter, Karen, vanished in the English countryside over 20 years ago. When Jan Carstairs (Tallulah Evans) and her family move into the idyllic Aylwood manor for the summer, Mrs. Aylwood is taken aback by Jan’s striking resemblance to Karen. The family is warned against entering the surrounding woods, but Jan and her little sister Ellie (Dixie Egerickx) hear voices coming from the forest. Strange occurrences begin to unnerve the family and Jan begins to suspect that they are linked to Karen’s disappearance. As Jan unravels the dark past hidden by the townspeople, she delves further into the mystery and deeper into danger, but now it might be too late to escape The Watcher in the Woods. TheWatcher in the Woods is produced by Hartbreak Films. Paula Hart also executive produces. The script was written by Scott Abbott.

Flint is the gripping retelling of a crisis that shook a nation and shines a light on the whistleblowers who exposed the biggest environmental scandal of our generation. LeeAnne Walters (Betsy Brandt, Breaking Bad), Melissa Mays (Marin Ireland, Sneaky Pete) and Nayyirah Shariff (Jill Scott, Steel Magnolias) join forces after discovering that the drinking water in Flint, Michigan is contaminated, resulting in a slew of devastating medical problems for their families. When their claims go unheeded, they band together to expose the wrongdoings committed by their reckless, bean-counting government officials whose carelessness caused irrevocable harm to the lives of its residents.Golden Globe®-winner, Academy Award® and Grammy®-nominee Queen Latifah (Star) also stars and executive produces.

Lifetime has partnered with the United Way of Genesee County on a PSA, featuring the cast of Flint, to encourage viewers to donate to help the people of Flint.Funds raised will go to much needed short-term, immediate relief, including purchasing filters and bottled water, and more long-term health and development needs for the children of Flint and their families. To donate or for more information, go to http://www.unitedwaygenesee.org/lifetime.

While Robert Durst has captured headlines with his recent arrest and controversy surrounding the documentary, The Jinx, Lifetime puts his forgotten first wife Kathie at the center of The Lost Wife of Robert Durst. Young and wide-eyed Kathie (Katharine McPhee, Scorpion) falls in love with charming, yet quirky real estate scion Robert Durst (Daniel Gillies, The Originals), only to find their marriage turning stranger, darker and more disturbing as time passes. But when Kathie disappears in 1982, her family and friends are deeply disturbed that her disappearance isn’t taken seriously by police. While Durst is currently in jail awaiting trial for the murder of his close friend, journalist Susan Berman, the questions linger as to what really happened to Kathie. The Lost Wife of Robert Durst pulls back the curtain on the world of Robert Durst and explores what may have happened between him and Kathie. Based on the book A Deadly Secret: The Bizarre and Chilling Story of Robert Durst by investigative journalist Matt Birkbeck, the film is executive produced by Lincoln Square Productions’ Linda Berman (Madoff) and Rudy Bednar (Final Witness). Emmy Award winner Yves Simoneau (Bury My Heart at Wounded Knee) directs from a script written by Emmy nominee Bettina Gilois (Bessie).

I Am Elizabeth Smart – Premieres November 18

2017 marks the 15-year anniversary of Elizabeth Smart’s abduction. Part of a cross-network event with A&E, Lifetime’s I Am Elizabeth Smart is the definitive, authorized movie about the harrowing kidnapping of Elizabeth Smart, told from her perspective and with her full participation. In June 2002, Elizabeth Ann Smart (Alana Boden) was a 14-year-old girl when she was abducted from her Salt Lake City home by religious fanatic Brian David Mitchell (Skeet Ulrich). He brought her to a hilly encampment where, with his twisted accomplice Wanda Barzee (Deirdre Lovejoy), he held Elizabeth captive. She was starved, drugged, raped and subjected to bizarre religious rituals until, nine months later, she enabled her own rescue. A film about the kidnapping was rushed on the air shortly after the incident, but it shied away from the reality of what Elizabeth went through. Now, in I Am Elizabeth Smart, Elizabeth herself, as a producer and on-screen narrator, explores how she survived, and confronts the truths and misconceptions about her captivity. I Am Elizabeth Smart is executive produced by Steve Michaels, Jonathan Koch and Joan Harrison of Asylum Entertainment, Allison Berkley and Joseph Freed of Marwar Junction Productions. Barbara Lieberman and Tom Patricia also executive produce the movie with Elizabeth Smart serving as producer. Sarah Walker directs from a teleplay by Tory Walker.

The two-part documentary special, Elizabeth Smart: Autobiography debuts on A&E on November 12 and 13.