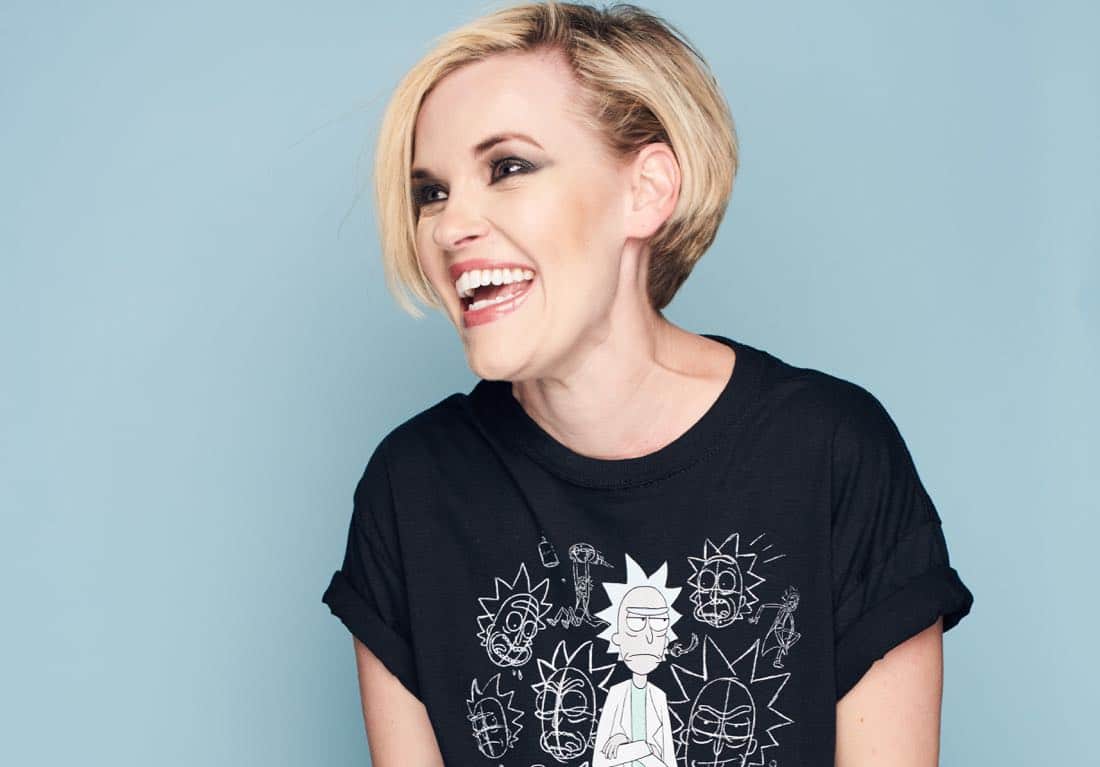 Every so often, we hear a voice that captures our attention and we listen a bit more closely and happily hoping we are lucky enough to hear that voice again.  Children and attentive adults are already in tune with recognizing their favorite actors in animated films and television shows.  They know instinctively the voice of their favorites. One such voice you should know or should be on the look out for is voice-actor Kari Wahlgren, who is likely in one of your favorite shows or films and you may not have realized it.  In the upcoming film “The Nut Job 2,” Kari voices the character of groundhog Jamie.  But you may also recognize her from the roles of Victorion in “Transformers: Titans Return” or as Yoco in “Nicky, Ricky, Dicky & Dawn,” or even as Lyra, Balatha, Doris or Poofhilda in “Niko and The Sword of Light.”  Kari has voiced characters on over 200 television shows and films.  Her voice is simply everywhere and she has enjoyed a rich career because of it.  In an exclusive interview, Kari shares a bit about the appeal of being a voice actor and what she has learned along the way.What initially appealed to you about becoming a voice actor?KARI:  I was always fascinated by cartoons as a child, and I told my parents I was going to be the voice of a Disney cartoon one day!  There’s just such a magic and whimsy about animation…and there are fewer limits on the storytelling.  I love that I can play characters of all different ages, genders, (species!) and backgrounds…I don’t have that same freedom on-camera.How would you describe what it is like to be a voice actor?KARI:  It’s busy, creatively fulfilling, and high energy in the studio…but it’s also anonymous in a lot of ways.  You can be on the red carpet for an animated movie one night and at the grocery store the next morning, and no one knows who you are.You are in high demand from the looks of all your current projects, working on “Bunsen Is A Beast,” “Justice League vs. Teen Titans,” “Kung Fu Panda: Legends Of Awesomeness,” “The Fairly Odd Parents,” “Rick and Morty,” “Star Wars: The Old Republic,” “Final Fantasy XII,” “Dorothy and The Wizard Of Oz,” “Spirit Riding Free,” “Marvel’s Avengers: Secret Wars.”  How do you choose your projects and then find the time to do them all?  KARI:  I audition for most of these roles! Voice actors are constantly auditioning, and it’s always a thrill to book another job.  Scheduling can be really tricky sometimes, but I’m lucky to have an incredible agency that handles the day to day timing of it all.What would you say is the trick to successfully landing a voice actor role?  KARI:  You have to bring something that is uniquely YOU to the project.  I think the biggest misconception is that voice actors just do a funny voice and that’s it.  You have to approach the character first…bring your strengths and acting choices to the copy and find ways to make it more than just a funny voice.Any favorite projects that you have gotten to work on?  KARI:  I can never pick just one!  Dorothy in “Dorothy and the Wizard of Oz” has been a recent dream come true, since I’m from Kansas originally.  I’ve been called ‘Dorothy’ every day since I moved to Los Angeles, so it feels like I’ve finally come full circle!What has been one thing you have taken away from each of your current projects? KARI:  I think I’m trying to stretch and grow with these new projects. I’m really trying to push my boundaries and figure out what more I can do.  I like to keep challenging myself to get better.What has been the biggest challenge working as a voice actor?

KARI: I’ve learned that I can’t control the outcome of my work.  I’ve done projects that didn’t go anywhere or didn’t go past a certain number of seasons, and it can be disappointing and frustrating.  I’ve had to learn that my job is to go into the studio and do the best work I can in that particular session, and then, let the rest go.What have you learned from all your years as a working voice actor?KARI:  People appreciate it when you’re punctual.Then what has surprised you most about your career so far?  KARI:  It has introduced me to some of the most amazing people in my life and taken me to different parts of the world. The whole thing continues to surprise me.At this stage of your career, what do you think you have learned from the amazing variety of roles and projects you have worked on?KARI:  I think I continue to learn new things about myself and what I can do, and I love that I can still get excited about a new project!Then what are the perks of where you are in your career right now?  KARI:  Once in awhile, I get cast without auditioning based on my reputation in the industry…that is a huge compliment.If there were one role you would like to revisit, which would it be and why? KARI:  Oh man…I’m pretty self-critical, so there are a number of roles I would do over again if I could…Do any of your characters and the situations they find themselves in ever leave a lasting impression on you?KARI:  Every once in a while, a scene will really get to me.  We recently recorded an episode of “Spirit: Riding Free” for Netflix, and I could barely get through it without crying.Has there been any great advice you have gotten?  What advice would you offer to other upcoming and aspiring voice actors? KARI:  I think I would just say get to know your voice and constantly strive to get better. Train hard, be professional, be kind.You also have a part in the new film “The Nut Job 2.” How would you describe the character you portray in the film and what was fun about working on that project?KARI:  I play Jamie in the movie- a brassy, bossy little groundhog.  I really loved the guys I worked with on that project. They were just really great people who have worked hard to make a good film.  I’m excited to see it soon!Do you have any other upcoming projects that you can share that fans should keep an eye out for? KARI:  New updates will be coming very soon.  Fans can follow me on Twitter @KariWahlgren or on Instagram @kari_wahlgren  I also have an official Facebook fan page…so I’ll be sharing news of more projects as soon as I can talk about them!At a time when women’s voices are rising to be heard and respected around the country and world, what do you recommend your fans do to lend support in that endeavor? KARI:  There are so many ways to get involved now.  If you want to help homeless women, volunteer at a shelter.  If you want to help women in business, you can help donate towards female-driven start up companies here and abroad. If you want to see more females in movies, say it with your spending dollars…look at the success of the Wonder Woman movie!  The key is to do SOMETHING.  Find a way to support women in a way that’s meaningful to you, and it will make a difference.To hear some of Kari’s great work, be sure to check out “The Nut Job 2,” which will be released on August 11th and follow her on social media for updates on her current projects.