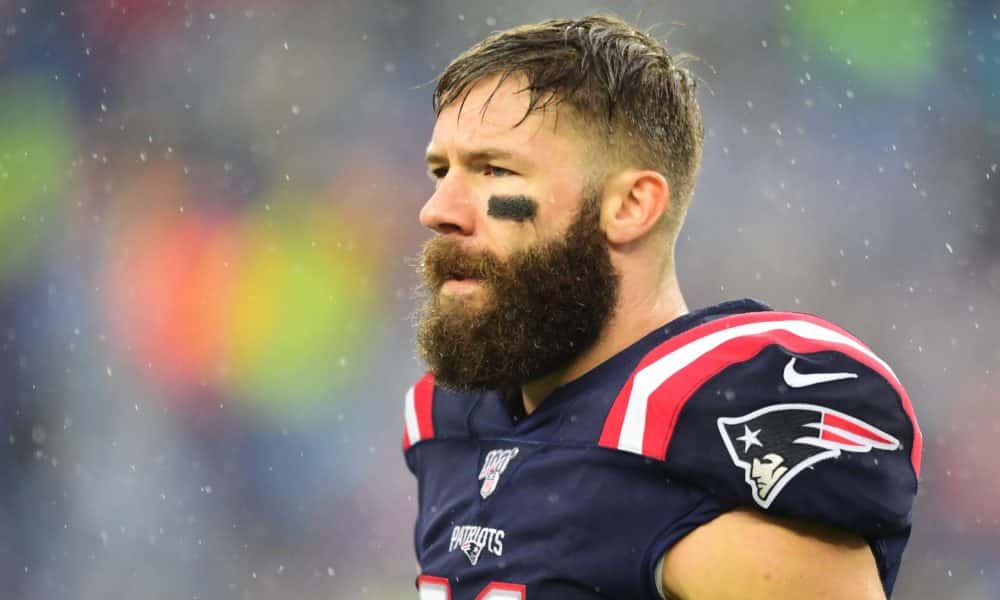 Three-time Super Bowl Champion and Super Bowl LIII MVP Julian Edelman will join the Emmy® Award-winning studio show INSIDE THE NFL as an analyst when the series makes its debut on Paramount+ this September, kicking off its 43rd season on television. Edelman will join James Brown, Phil Simms and Brandon Marshall for the weekly series, also featuring contributions from NFL Hall of Famers Michael Irvin and Ray Lewis throughout the season.

Edelman, who recently announced his retirement from the NFL, will provide a fresh-off-the-field perspective, commentary and expert analysis using the knowledge he acquired over the course of his legendary 12-year career with the New England Patriots, in which he earned a reputation as one of the NFL’s most clutch receivers.

The move to INSIDE THE NFL will mark the second association between Edelman and ViacomCBS brands. Edelman, alongside founding partner Assaf Swissa, launched Coast Productions in 2019 and worked with SHOWTIME Sports on a documentary film co-written by Swissa and director Kyler Schelling titled 100%: JULIAN EDELMAN. In addition to INSIDE THE NFL, Edelman along with Coast Productions will further explore their creativity with the development of projects across various ViacomCBS networks and properties as part of the multi-year deal.

“Growing up I had two dreams: to win a Super Bowl and to be Maverick from Top Gun. So far, only one of these dreams has come true,” said Edelman. “When it came time to start thinking about my life after football, the path was clear. Having already established a strong relationship with Stephen Espinoza and David Nevins from a previous project with SHOWTIME, joining the ViacomCBS and CBS Sports team became the obvious choice, leaving one dynasty for another. I’m honored to join the iconic show, INSIDE THE NFL, and create original content with Coast Productions. I’m so grateful for the opportunity to chase down a different dream. Sorry, Goose. It’s time to buzz the tower.”

“We witnessed the creativity that Julian and his team put behind 100%: JULIAN EDELMAN, and we admired their ability to combine Julian’s unique voice with powerful, authentic storytelling,” said Stephen Espinoza, President, SHOWTIME Sports. “We are thrilled to welcome Julian to our team and embrace that voice as he becomes a dynamic force for us every Tuesday on INSIDE THE NFL. We are equally excited to continue our relationship with Coast Productions and explore additional content produced with their contagious creative energy.”

“Julian has been one of the greatest competitors and clutch performers in the NFL over the past decade, and we are excited to welcome him to INSIDE THE NFL,” said Sean McManus, Chairman, CBS Sports. “He will provide our viewers a fresh perspective and valuable insight having just stepped off the field. With his incredible career accomplishments, combined with his dedication, passion, and knowledge, we are looking forward to Julian joining our team.”

While Edelman becomes part of one of the longest running programs on television, Coast Productions also will make ViacomCBS its new home. Coast is at the forefront of creating a unique space for athletes to tell original stories in new and creative ways. Responsible for creating Edelman’s viral web shorts over the years, Coast is currently developing scripted and unscripted content. Proven creators of engaging content, Coast will bring that same sensibility to producing fresh content across the ViacomCBS networks and properties. Edelman becomes the latest in a line of elite athletes making the move to bring their athletic star power to television.

INSIDE THE NFL covers every game, every week, with trademark highlights from NFL Films, special in-depth features and spirited debate on the game’s hottest topics. The show is produced by CBS Sports, SHOWTIME Sports and NFL Films, with new episodes premiering every Tuesday night on Paramount+ during the NFL season through Super Bowl. The executive producers of INSIDE THE NFL are Sean McManus, Chairman, CBS Sports and Stephen Espinoza, as well as Ross Ketover and Pat Kelleher of NFL Films. Pete Radovich Jr., the award-winning Senior Creative Director for CBS Sports, serves as long-time coordinating producer.