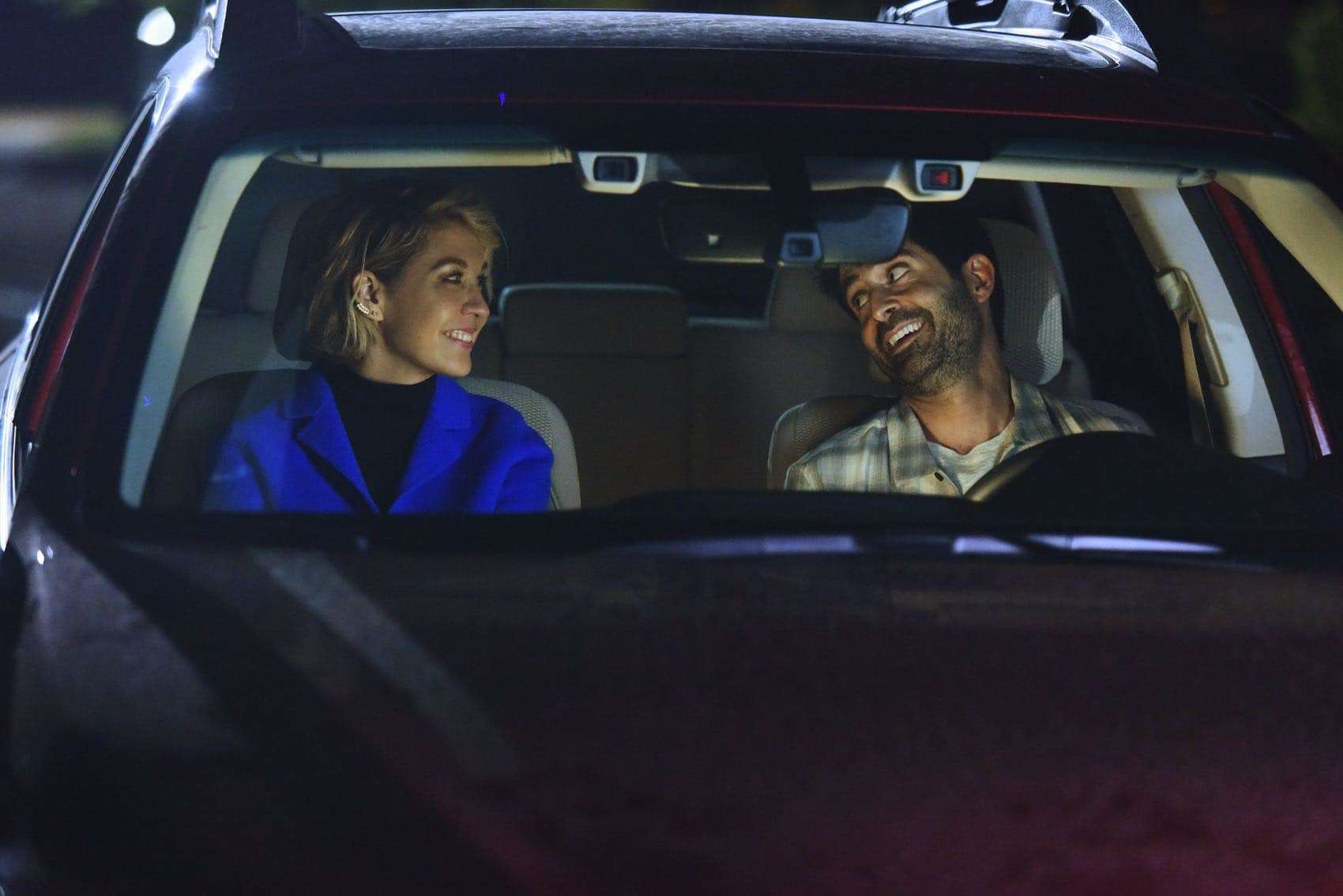 Every child has an imaginary friend at some point in their young lives. But what if, one day when you are older, your imaginary friend came back? In ABC’s new comedy series IMAGINARY MARY, Alice finds herself confronted by her friend Mary — who no one can see but her. While visiting the set of IMAGINARY MARY, stars Jenna Elfman and Stephen Schneider chatted with press about bringing Mary to life in the midst the lives of their characters Ben and Alice as they navigate their new romantic relationship around Ben’s three kids.

What attracted you to IMAGINARY MARY?
JENNA: I pick projects that interest me. I like working. I like being productive. I enjoy being creative. I like being on set. I like creating. When I’m not doing that, I love spending more time with my children, obviously, because it’s a balance. So I’m trying to do everything, but creatively, I start getting super antsy because I like to be doing something, creating my art. I have just a lot of energy and I like being on set where I can have somewhere to put all that energy.

Why does Mary return into Alice’s life at this critical point? Is it simply because Ben has kids?
JENNA: Yes. It’s heading into complete unchartered, undecided territory and Alice made a policy with herself: no marriage, no kids — not doing it.

Does Mary actually like Ben?
JENNA: Yes, but it’s never about her affection for him. It’s always about the quality of decisions that Alice is making. She’s always around the house when she’s making decisions, because Alice don’t know which course to chart and she’s like, “This is going to be a disaster!” Mary’s a big one for trying to maintain Alice’s independence.

How do you find the balance of having Mary, as a character, in the story?
JENNA: I think that Alice needs her because because Alice was never intended to have a serious relationship, nor be around kids, nor meet an ex-wife, nor take any responsibility for children and be in their life. Like I’m a parent and it’s an enormous job and everyday I’m like: “What do I do now? What do I do right? Oh, this is a new situation. What do I do now?” That’s with full love, compassion, ownership, and creation. So being someone who’s coming into the lives of three young kids affects her character. It affects people.
STEPHEN: For me, the way I always envision it is like Mary is Alice’s inner monologue.
JENNA: That’s it, totally.
STEPHEN: Like every time I’m in my car, I’m talking to myself. It’s just talking things out with yourself and trying to figure out what the right move is.

When you’re working with Mary, are you acting opposite a person or just yourself?
JENNA: Good question. We have a rehearsal with the puppet and then we film one take with the puppet for reference, for animators, for camera, for everybody, so we know the space existing and everything, and light shadows. Then that’s it. Then she goes away. After that, it’s just me. So it’s both. That’s why I like the challenge of navigating it. It’s my inner dialogue with a little juice. We have a Canadian comedic actress who’s doing Mary’s lines right off camera, so really she’s creating a universe for me. She’s my dance partner. In my head, I put a mock up of Mary in my imagination right in front of me. She’s an extension of my mind.
STEPHEN: Yeah, it’s interesting. For me, sometimes Mary will have a rant when I’m in the scene talking. So I have to be thinking about what I’m saying and, at the same time, allowing time for her to get in while it still makes sense and that if you pull her out, that we’re having a regular conversation.
JENNA: I try to connect with [Stephen] while that’s happening, so that he’s feeling like we’re in a scene together. But yeah, it’s a little bit like split scene.

What is the key to what your show IMAGINARY MARY is about?
STEPHEN: Well, two major themes: one is this guy who’s juggling having his own career and his business and at the same time he’s a divorced dad with three kids in the throes of puberty and trying to just get through life. In today’s world that we live in, more people are divorced, so that’s represented. At the same time, it represents the single woman–
JENNA: — the career chick.
STEPHEN: The empowered career chick with all that. At the end of the day, the thing that always brings us back together is love. That’s the thing we’re all striving for, because it makes us better. It eases the rest of the pain of life.

Does Ben have any quirk or is he simply the straight man to Alice and Mary?
STEPHEN: Remember that game “Don’t Break the Ice with the Marbles”? Ben’s got just so many marbles on his plate. It’s about to break at any level. What we get to see is these moments where he snaps and loses it. It’s all done in a way that’s out of frustration, but I think his quirks come from being the best father he can possibly be and the extremes that he’ll go even doing things that would typically no human being would do.

Does Mary ever agree with Alice?
JENNA: It’s rare. Because there’s always that self-doubt when you’re navigating something unknown. So you have to make a choice at some point. For Alice, there’s areas of work she’s like totally confident, knows exactly what she’s doing, and has no doubt whatsoever. But this relationship with Ben is unchartered territory, which I also think is nice, because my character does have confidence and abilities and it’s worked for her, especially with a challenging upbringing. Her parents weren’t there and yet she’s an accomplished chick. She has created her own business and knows what she’s doing. She’s got good taste. She’s worked hard. She’s proven to herself that she can do it. So she is at a big point of strength in her life. I think it also helps ground her having Mary.

In the scenes with Mary, do you have that room to improvise?
JENNA: In terms of her lines, they can put in whatever later. Mainly, it’s blocking things in terms of how we’re structuring our movement, because they are filming it being aware of where Mary’s going to be in the space. But a lot of times, there’s still flexibility. Our improv is usually with a line here or some physical bit or some moment with each other.
STEPHEN: Up until this point, truthfully, the scripts have been so honed and so sharp. David Guarascio and Adam Goldberg are really funny. They’re really sharp and super mega talented writers, and its’ trickled down effect, so all the writers that they’ve brought in, they really are producing very smart and funny scripts.
JENNA: We have fun.
STEPHEN: So much already on the page to explore and to play with.
JENNA: They’re more like moments of behavior or beats that weren’t there that’s just a physical bit or an emotional hitch or extension of a moment. It’s not really improv. It’s just acting. That might not be necessarily written emotionally that we find. . . It’s make-believe. I’m really kid-like and immature and responsible-immature. I like making believe and pretending. It’s just total carte blanche to be a kid and have fun and be silly and ridiculous. You have to believe. It’s a fine line of believing this character. There’s this suspension of a universe that’s a tightrope walk of making sure Alice is not a crazy person, but that we’re playing a little make-believe so the audience can grant a little dose of make-believe. That’s my one challenge that I enjoy. I enjoy all the balls I have to juggle. This is a great. I love it.

To see what adventures Mary stirs up in Alice and Ben’s lives, tune in for the premiere of IMAGINARY MARY on Wednesday, March 29th at 8:30 p.m. on ABC.