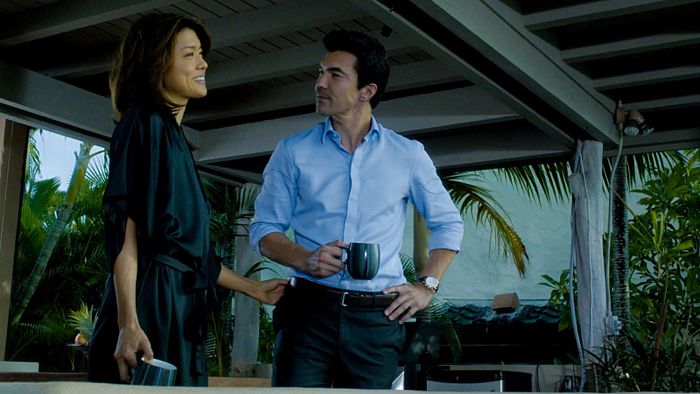 With Scott Caan taking some time off this season after the birth of his baby (at least that’s what I keep hearing), we’ve had a lot of episodes without Danny. This time he was off testifying on an old case of his back in Jersey, which left the team to handle another case without him.

In Danny’s stead, Steve got to work with an old friend, Agent Morrison from ICE. Morrison spent months getting close to a baddie named Roman, but the one guy who could identify Roman took a knock to the head and suddenly couldn’t remember anything. Talk about inconvenient.

Meanwhile, Kono and Adam were staring down the fact that they’d been together a year since she found him after his time on the lam. I really couldn’t blame Kono for asking Adam to sell his business. I know it’s a big deal, but I don’t see any other way they could be sure that those connections were severed once and for all. It’s not like she asked him to retire and sit on a beach drinking Mai Tais. Once the business is gone, he would have money to start up a new one and I have a feeling Adam is the kind of guy who has tons of ideas he could make happen in a heartbeat.

While Kono had all that on her mind, she and the team had to keep Dekker safe and try to find Roman. Pulling a fake death for Dekker to keep Roman at bay was a great idea. But as it turned out, Roman nearly beat them at their own game. I completely fell for the decoy guy and thought they had him in that park, but I also had a sneaky suspicion that it couldn’t be over that easy. Sure enough, the party girl they found shot up in the raid was actually none other than Roman.

I love it when Kono gets the chance to shine and boy did she ever in this episode. She single-handedly kept Dekker safe and went to great lengths to lead Roman away from him. Once Roman found her, there erupted a woman vs. woman battle, the likes of which we haven’t seen on this show in a while. As if that wasn’t enough to clinch her superhero status, Kono followed up her long day by going to see Adam and basically proposing to him. I mean come on, how amazingly cool was that?

I’m happy that Kono and Adam have found their happiness and can finally put their rough past behind them. I think taking a walk down the aisle is the perfect way to erase all that and hopefully start fresh.

OMG! It’s the pilot from Lost! I hope a giant smoke monster doesn’t get him.

Steve reluctantly sitting in Odell’s chair, and warning him not to touch his sideburns.

Steve’s face when he found out he had to pay for the haircut he never wanted in the first place.

Agent Morrison coming face to face (or, well, face to back) with Roman.

Jerry busting out both “trubs” and “zak” in less than 30 seconds. That was awesome.

Jerry admitting to having a “little man crush” on Adam.

Kono getting relationship advice from Dekker.

Knowing as soon as he said he could wheel himself around the hall that Dekker was probably going to be in trouble.

Odell referring to the squad room as the “Five-0 Bat Cave.” I love that.

Wait. What? Roman is a SHE?! I soooo did not see that coming.

Kono going all badass and using her own blood to lead Roman away.

The Roman vs. Kono fight that ended with Roman being literally blown across the room. Amazing!

Dekker: “Sister’s a badass.” – He took the word right out of my mouth.

Kono proposing to Adam. I don’t think I can use the word “badass” again, but I think it still fits.

Jerry driving that car wearing that suit and singing that song. Too perfect. And yes, I totally sang along with him. How could I not?

What did you think of this episode of Hawaii Five-0? Did you suspect that Danielle might actually be Roman?