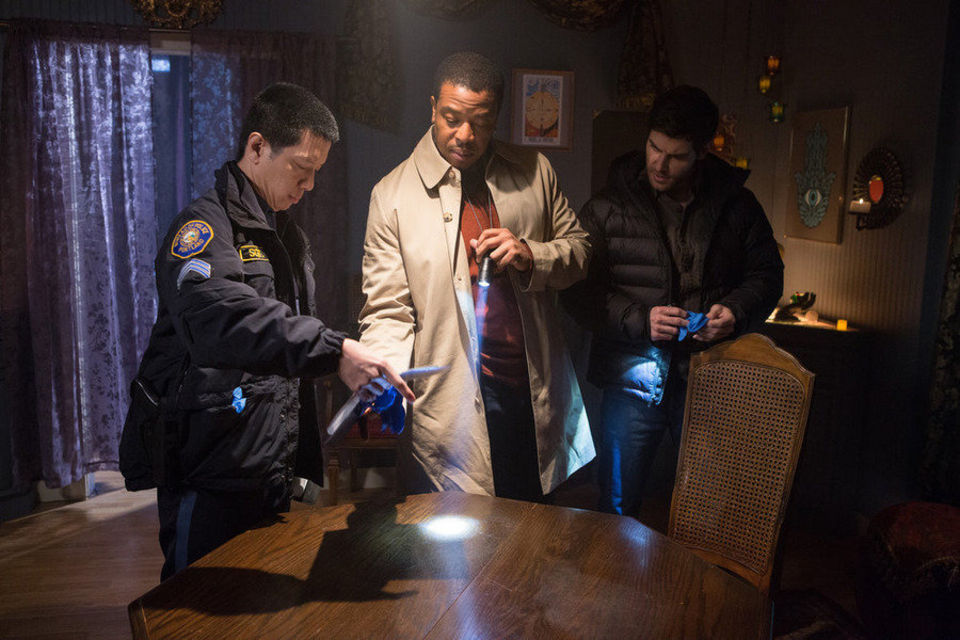 This week’s episode of NBC’s GRIMM is called “Maréchaussée.” For those unfamiliar with the term, as I was, it refers to the secret French police force that worked under the monarchy and who were basically bullies whose victims had no appeals process. To no one’s surprise, the Wesen royals have their own Maréchaussée, seen this week in the form of a bounty hunter (Arnold Vosloo, 24, The Mummy), who comes to town to take out a couple of false fortune tellers. Then he receives a new assignment: Nick (David Giuntoli).

I’m torn in my opinion of this episode. On one hand, the central Wesen guest star is connected to a larger story and group, and the title of the episode makes reference to that. So that makes it a mythology episode that moves along the arcs, the type of serial story I enjoy from Grimm. On the other hand, Nick, Hank (Russell Hornsby), and Wu’s (Reggie Lee) hunting of said Maréchaussée plays out very much like the police procedural crap this show has been spitting out recently, without enough variation in the main thread to set the hour apart. “Maréchaussée” toys with what once made GRIMM good without fully delivering on it.

During the investigation, it’s Wu who is now the human super-computer of knowledge and problem-solving. This serves a dual purpose, proving that Wu should have been a part of the team all along and giving him something to do in the episode, both good things. The problem is, Wu continues to get little acknowledgment from his teammates and he still feels tacked into the group, rather than a full-fledged member of it. Wu’s story starts the year so promising, and it, like this episode, fails to be what it should.

Yet, I can’t help buy enjoy “Maréchaussée.” There are some great subplots, which I’ll get to in a minute, and the case above is entertaining. Vosloo is a great guest star, if not used enough. His murder of the fortune tellers feels good because they deserve to die. Having the viewers know there’s something a little bigger going on and our heroes in the dark is engaging, as we wonder when they’ll put the pieces together. Even though the bounty hunter is killed, more will definitely be following. So, overall, while this isn’t one of the best episodes of GRIMM, it’s far from one of the worst, and certainly better than the last few.

A big development that happens this week is that Viktor (Alexis Denisof) and Adalind (Claire Coffee) come to Portland. They are hunting for Adalind’s baby, whom Renard (Sasha Roiz) sent away. It’s surprisingly only that it takes them so long to arrive, given that their focus this season is finding the infant, and now that they’re here, all sorts of delicious drama can take place.

Viktor has major political power and has plenty of people at his command. This makes him a very real threat, one Renard can’t just put off. It’s a good thing that none of the major players know where the baby actually is because that means Viktor’s interrogations can only go so far. The bad news is, once Viktor realizes the dead end, he’s going to get more dangerous and violent. And there is a way for Nick to get in touch with his mom, so the child isn’t completely safe.

Renard has a secret weapon, though, and that’s Juliette (Bitsie Tulloch). Henryetta (Garcelle Beauvais) tells Juliette this week that she can’t be cured of her Hexenbiest affliction and that she’s hella powerful. This understandably disappoints Juliette, but it also gives the good guys a very valuable ally that Viktor doesn’t know about. Juliette could be a game-changer here, especially given the bad-ass way she takes out the bounty hunter.

What’s also a game-changer is that Nick doesn’t know about Juliette because he’s the worst detective and most unobservant husband ever, and it’s going to really hurt their relationship when he finds out she’s been keeping this from him. She’s scared and ashamed, but she should turn to Nick, since Nick is the one who deals with these type of creatures. The fact that she hasn’t told him is nearly inexcusable.

Nick should forgive her, though. After all, she forgave him for keeping all his Grimm stuff a secret much longer. As wrong as it is for her to keep this to herself, indicating a very big lack of trust in their relationship, he should just consider this making them even. From here, they can either both put the past behind them and be better to one another, or they can break up. There should be no long, rocky road because they’ve already gone through that and it clearly hasn’t fixed them.

Next week looks to be a better episode, as there just doesn’t seem to be time for another case-of-the-week. Though, I won’t rule one out, since Grimm seems to be making many bad storytelling decisions as of late. We’ll see.