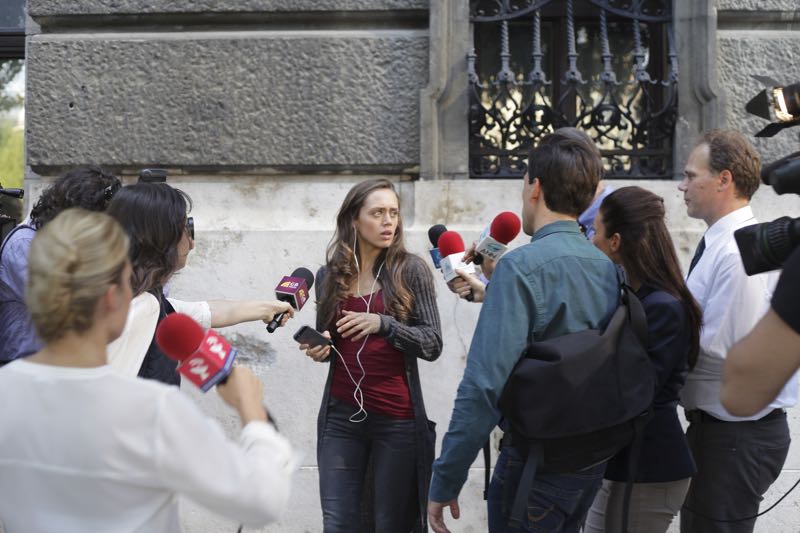 A guilty pleasure show is, by definition, a show you feel bad about enjoying. Freeform is going for that category with the new drama series GUILT, premiering this week. Loosely inspired by the real-life Amanda Knox case of an American student abroad accused of murder, it weaves a complex web of many characters with various selfish drives and possible motives for murder. And it utterly fails to be good television, even in the guilty pleasure realm.

GUILT begins with Grace Atwood (Daisy Head, The Proxy), a coed, waking up next to a sexy French artist (Zachary Fall, Allies), only to find her roommate dead in the London flat below. If that sounds like a lot of nationalities, that’s because it is, just a small taste of how the show goes for flash over substance. It’s important that everyone and everything be beautiful and exotic to make the tale as fantastical and enticing as possible. Each scene brings more and more of these types of choices.

And that immediately gets to the crux of what GUILT does wrong. Rather than going for a slow burn drama that focuses on character development and the emotion of the situation, this show likes to throw out lots of tears, splashes of blood, and awkward expositional confessions that really aren’t necessary or warranted in the moment.

You might think those are just the elements of a good mystery, but GUILT isn’t that, either. It isn’t short on suspects nor clues, but so many of them are clearly false that it lacks authenticity. Whereas a real case like this might make it difficult to find the details of the situation, the police tasked with the job, led by DS Bruno (Cristian Solimeno, Rush), are beset by constant leads, few of them worth much. It’s a dizzying, fast-paced ride that doesn’t worry about authenticity or a strong foundation.

This is clear in looking at the rest of the cast, too. Buffy the Vampire Slayer’s Anthony Head plays James Lahue, slimy stepfather to Grace, and an American despite Head being British (and Daisy’s real-life father). While I like Head in the right roles, this one just has him as a flat antagonist who serves little purpose. Billy Zane (Titanic) is equally bombastic as the lawyer James hires, introduced with a poorly animated squirrel and some too-loud moaning, Zane may be having fun as Stan, but it’s hardly fun to watch him.

The moaning is only the tip of the iceberg for the sexcapades present in the pilot. Yet, because GUILT is on the network formerly known as ABC Family, it stops short of showing anything really exciting. Viewers get lots of suggestions to kink or eroticism, but no payout of it. Given the pulp nature of the piece, sex might help it sell itself as something worth watching, even if only for the titillation factor. With the limitations placed upon it, though, it lacks anything novel or alluring enough to suck all but the least desensitized in. There are plenty of cable networks that go a lot further on a regular basis.

So what we’re left with is a light-weight piece that promises much and delivers little. It sacrifices any chance of serious consideration for some over-the-top dramatics and “surprise twists” that are neither. It’s the type of summer show that might appeal to a YA audience that didn’t know there were better options out there, but I wonder how much of one exists in the age of carrying the internet in our pockets. I just don’t see it as likely to catch on, and if it somehow miraculously does, it will only be among a niche audience.