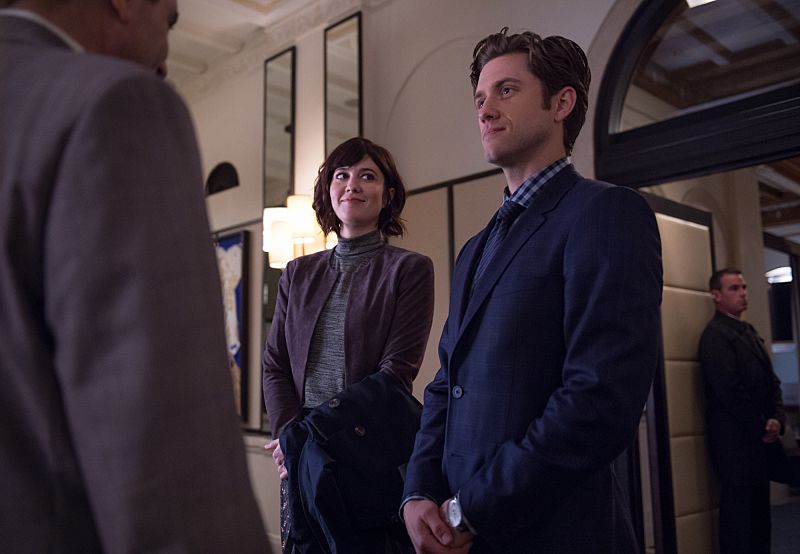 From the creators of The Good Wife, Robert and Michelle King, comes a new summer drama (sort of) series, BRAINDEAD, premiering tonight. Set in modern-day, partisanship-paralyzed Washington D.C., it follows a group of people connected to the government, some of whom begin to suspect that all of this chaos is not completely on the fault of the humans. Or, there is an alien race who is beginning to take advantage of our mess for their own gains. No, it’s not a documentary, it is fiction, though there will be plenty who wish reality was so easily explained and fixed.

The protagonist is Laurel Healy (Mary Elizabeth Winstead, Mercy Street, 10 Cloverfield Lane), a kind-hearted, student loan-strapped documentarian who would like to stay far, far away from the nation’s capital and those who populate it. A relatable outsider, she is not trusted by those in power because they don’t think she knows their world. And, they’re sort of right.

Laurel has been semi-forced to relocate to D.C. by her father (Zach Grenier, The Good Wife), who says he will fund her stalled film if she gives him six months working for her brother, Democrat minority whip Luke Healy (Danny Pino, Law & Order: SVU). Laurel is willing to sell out some of her principles, though not keep her mouth shut, for such a bribe, and so she gets to work helping Luke’s constituents.

It takes almost no time at all for Laurel to get drawn into the mystery, though, when one of the voters complains of her husband acting strange. Before the pilot comes to a close, the husband isn’t the only one, and viewers are let in on exactly what’s going on, even if Laurel is still working the long road of clues towards the bad guys (and eventually the solution).

BRAINDEAD is populated with a terrific cast, from the three mentioned above, to Aaron Tveit (Graceland, Les Miserables) as a Republican Congressional aide whom clashes with Laurel, to the handsome investigator (Charlie Semine, Mercy), to Megan Hilty (Smash) in a small role as a newscaster, to the cherry on top, Tony Shalhoub (Monk, Nurse Jackie, Wings), as a mind-controlled senator. Each play comedy well, especially when it comes to characters who aren’t trying to be funny, but Shalhoub also excels at the intentional stuff.

You see, BRAINDEAD is billed as a humorous thriller, and I think that description is apt. There’s the very dark situation that is sweeping across the nation’s capital, but there are over-the-top humorous moments, as well as some more subtle political commentary, that keep things entertaining and without too heavy a tone. It has the feeling of those 1990s movies where the world is in silly danger, but with a higher quality writing and a production that takes itself more seriously, in a good way.

There’s a lot going on, with about half the main characters not even appearing in the first episode. This is good because I think it’s satisfying to see different sides of a situation like this, as there are many facets of what is happening. The entire run is set for thirteen episodes, which is a lot to fill, but despite the fast pace of episode one, I feel the Kings can probably do it well. (And their touted multi-season plan gives me confidence they have a good strategy.)

Still, there does seem to be something missing. I mean, I really enjoyed the pilot and am setting a season pass on my TiVo immediately, but there is still a little hollowness to the hour. I’m not quite sure what is causing it yet, and further hours will likely either illuminate or erase it. But it just feels a couple notches below The Good Wife, in my opinion, lacking quite the sharpness of wit present in the dialogue of that just-concluded series.