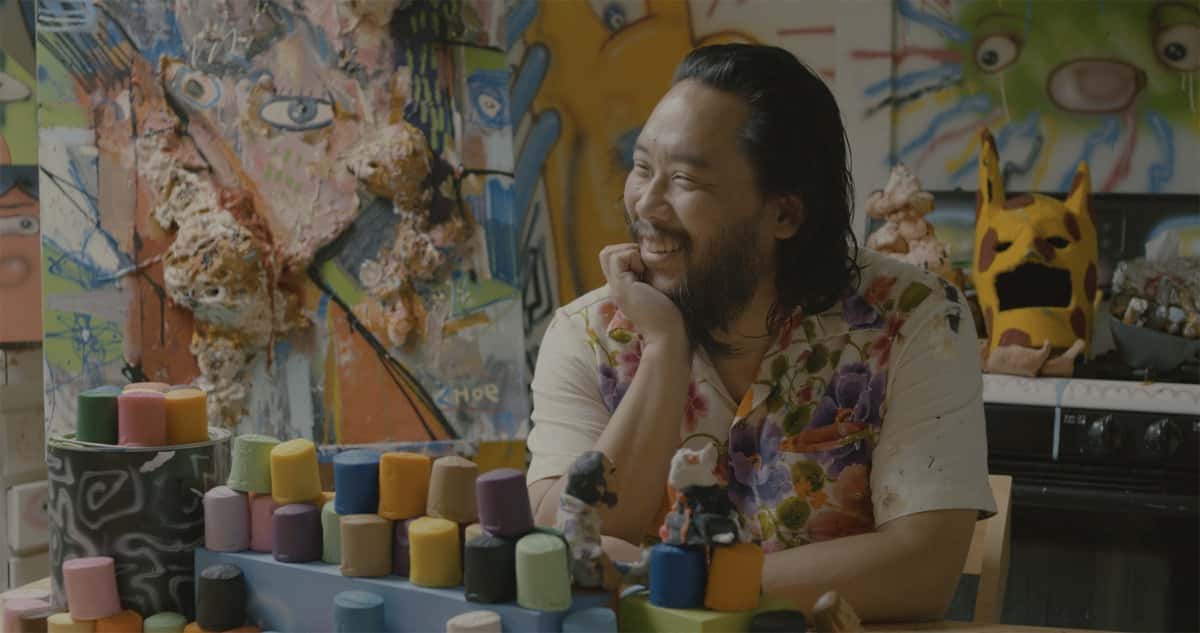 Renowned artist David Choe is getting a television canvas. The Choe Show is a new interview show where Choe paints a portrait—literally and figuratively—of his guests. FX will air all five episodes of the series on Friday, June 25 beginning at 10pm ET/PT. The episodes will be available for streaming the following day on FX on Hulu.

In The Choe Show, world-renowned artist David Choe turns his eccentric, compassionate and disruptive worldview into a lens for an audience to experience a kind of radical empathy for others. From the walls of his childhood home, Choe takes his guests on a journey where he is both a motivational interviewer and compassionate listener. While using the acts of art and play, both Choe and his guests depart on a journey of shared emotional experience. It is through their bonded and authentic connection that Choe is able to bring forth an of-the-moment honesty to the portraiture he’s creating.

Created by David Choe, The Choe Show is executive produced by Choe, Matt Revelli and Christopher Chen of Choe Show LLC, plus Hiro Murai and Nate Matteson of Super Frog Entertainment. The series is directed by Paco Raterta.

Choe is an award-winning fine artist whose transition into media through filmmaking has been unique amongst other artists of his caliber.

He has worked on and appeared in high-profile projects such as Jon Favreau’s The Mandalorian (Disney+), both on and off screen, the Netflix Originals Ugly Delicious and LA Originals, as well as appearances on Anthony Bourdain’s Parts Unknown (CNN) and VICE (HBO), both of which won Emmys® that year (2014) for Outstanding Informational Series.

Previously, Choe hosted, conceptualized and filmed two of Vice’s most watched programs on their internet streaming platform, The Vice Guide to Travel and Thumbs Up! His media appearances on numerous radio programs such as Howard Stern and The Joe Rogan Experience have also garnered some of the most watched and commented episodes of their respective programs.

The subject of a feature-length documentary, Dirty Hands: The Art and Crimes of David Choe, chronicles his rise in the art world to becoming the highest paid living artist in the world and is hard to find on any streaming platform.

He spends his life today living right-sized, present, joyful, grateful and in service.

FX is comprised of the networks FX, FXX and FXM, the video on-demand app FXNOW, and the streaming hub FX on HULU that features exclusive FX series, next day access to current FX and FXX series, and FX Networks’ library of legacy series. FX on Hulu exclusive series include Devs, Mrs. America, A Teacher and the upcoming The Old Man, Y: The Last Man, American Horror Stories and Fleishman is in Trouble. FX, the flagship general entertainment basic cable channel, launched in June of 1994 and is carried in 86 million homes. The diverse schedule features a growing roster of critically-acclaimed and award-winning hit drama series including Pose, Snowfall, Mayans M.C., and Taboo; the critically-acclaimed limited series American Horror Story, Fargo, American Crime Story, FEUD, Black Narcissus and the upcoming Shōgun and Pistol; acclaimed hit comedy series including Atlanta, Better Things, What We Do in the Shadows, Breeders and the upcoming Reservation Dogs; the half-hour series Mr Inbetween, The Choe Show and the Untitled B.J. Novak Project; a slate of docuseries and documentary features, including The New York Times Presents, The Most Dangerous Animal of All, AKA Jane Roe, A Wilderness of Error, Hip Hop Uncovered and Hysterical; and the FX Original Movie A Christmas Carol. FX is the former home of the critically-acclaimed and award-winning hit drama series The Shield, Nip/Tuck, Rescue Me, Damages, Sons of Anarchy, Justified and The Americans. The network’s library of acquired box-office hit movies is unmatched by any ad-supported television network. FXX, the newest network, launched in September 2013 and is carried in 82 million homes. Geared towards a young adult audience, the schedule features original series, movies, and acquired series. The channel is anchored by the acclaimed hit comedies It’s Always Sunny in Philadelphia, the Emmy® Award-winning comedy series Archer, DAVE and Cake, a weekly showcase of short-form comedy programming. FXX is also the cable home to The Simpsons, the longest-running comedy in TV history. FXM was launched in October of 1994 and is now carried in 57 million homes. Its schedule features classic films during the day (FXM Retro), contemporary box office hits and acclaimed, award-winning films, and short-form award-winning original programming in the evening.