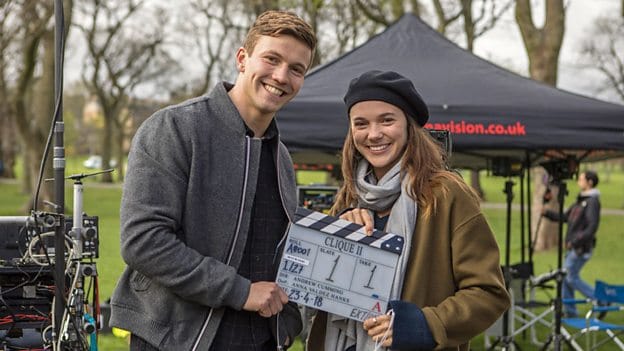 Synnove Karlsen (Holly), Sophia Brown (Louise) and Rachel Hurd-Wood (Rachel) will return for another gripping series exploring the power of friendship between intensely smart, complicated and ambitious young people on the cusp of an ever-enticing but dangerous adult world.

Also new to the series are Madeleine Worrall (The Legend of Tarzan, Paddington) and winner of the 2016 Edinburgh Comedy Award Richard Gadd (Against the Law).

Jess Brittain, writer and creator and Executive Producer of Clique, says: “It’s great to have the opportunity to return to the world of Clique to tell another story. I love writing for new and exciting young actors and can’t think of a better place than BBC Three to do that.”

Damian Kavanagh, Controller, BBC Three, says: “Series one of Clique created an enticing world for the BBC Three audience and we’re very pleased that it is returning. It continues our tradition of working with and growing new acting and writing talent and we’re looking forward to introducing more stars of the future via the second series.”

Tom Sherry, BBC Studios Executive Producer, says: “Jess has delivered a sexually charged thriller, with deeply seductive characters. We have a fabulous cast and everyone involved can’t wait to share the results.“

Where in the first series Holly (Synnove Karlsen) found herself drawn to a group of alluring, confident but troubled young women, the second series will see her encounter a radically different clique, this time a band of brothers.

Living in a house share with Louise (Sophia Brown) and some younger students, Holly is trying to put the past behind her. Nonetheless, she finds herself the subject of intense attention from those around her – from fellow students keen to hear about the events of last year but also from a close-knit, smart and magnetic set of young men.

Led by charismatic, good-looking Jack, the boys’ clique is a group of freewheeling renegades. When they become embroiled in a campus-wide scandal, Holly is torn between the kinship she feels with them and the unnerving sense that something darker is at play. Do the clique boys represent the provocative fight-back response of fed-up youth, or are their politics hiding a more personal, insidious danger?

Holly will soon find herself caught between two camps. And from within the secure unit where she ended the first series, psychopath Rachel (Rachel Hurd-Wood) is still keeping her obsessive gaze on Holly.

Clique (6 x 45’) is a Balloon Entertainment and BBC Studios drama for BBC Three. Following the UK premiere, US co-producer POP will premiere in the US, in a deal brokered by All3Media International. Executive Producers are Bryan Elsley and Dave Evans for Balloon, Tom Sherry for BBC Studios and Gaynor Holmes for BBC and Jess Brittain, Series Producer is Neil Duncan. The series will be distributed by all3media International, Balloon Entertainment’s international partner. Clique was re-commissioned by Piers Wenger, Controller of BBC Drama and Damian Kavanagh, Controller of BBC Three.