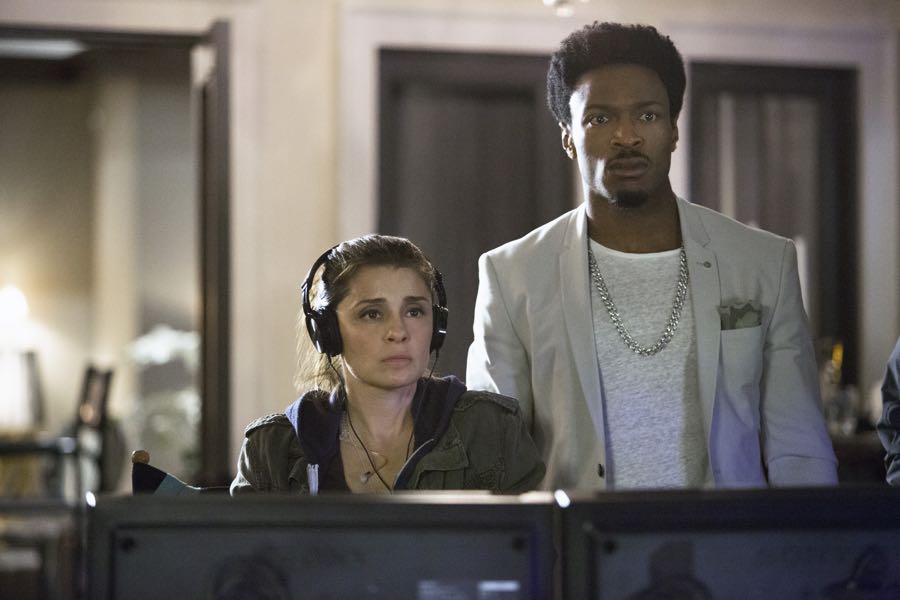 Currently portraying a ruthless sports agent in the Lifetime drama series UnREAL, Gentry White is a beacon of passion — not only is his character Romeo getting to romance leading lady Rachel Goldberg (Shiri Appleby), his character Romeo is also the loudest voice of reason amongst the insanity that reigns in the “Everlasting” world — passionate in romantic pursuits and passionate in protecting his client.  It is a tough world to navigate and Romeo is fighting the tide and grind of the equally ruthless world of reality television production.  In an exclusive interview, Gentry talks about dipping his creative side into the reality TV world, albeit a fictional one, and the joy of playing in the UnREAL universe.

What drew you to the role of Romeo on Lifetime’s UnREAL?
GENTRY:  It was the dialogue. I love smart-aleck characters and Romeo was just that. Initially I didn’t expect to get the role due to his original age, but my reps convinced me to go in and I did love the writing, so I’m glad I did.

How would you describe Romeo? What makes him tick? And where is his head at?
GENTRY: Romeo is intelligent, funny, and cunning. His main concern for even being seen is to get his cousin’s career back on track. As Darius’ sports manager, he too cares for Darius career because it directly affects his career as well, and Romeo is about his money.  At the end of the day Romeo is willing to do what’s necessary (or unnecessary, ha ha) to protect his cousin. That’s his family at the end of the day.

What one quality do you most admire about him and why?
GENTRY: His concern. He cares deeply for his cousin. They consider themselves more like brothers. I have a pretty big family and he reflects how I would treat my own family in similar situations. He’s a good guy. Sometimes his actions may say otherwise, but he means well.

How would you describe Romeo’s relationship with his cousin Darius?
GENTRY: Again, Darius and Romeo grew up together so they have a lot of history. They’ve come from humble beginnings and built all these flourishing careers together, Darius being a successful football player and Romeo managing a top sports star. If they disagree or fight they know that family is what they are, and that’s not going anywhere.

Does Romeo believe in the “Everlasting” hype and that is it possible to find love this way?
GENTRY: Absolutely . . .not. (Ha ha) No way! Romeo is not a dummy. He knows exactly what his intentions are for going on this show and allowing his cousin to be the suitor. It’s all about publicity for Rome.

What does Romeo hope to get out of “Everlasting” for himself? What does he hope it does for Darius?
GENTRY: Romeo just wants to get through this experience with people loving Darius again after that little issue with the news reporter. If America loves Darius again then the money will continue to come, and that’s the overall objective for Romeo.

What was the most fun part of working on “UnREAL”?
GENTRY: The best part of the show is the cast! I really enjoyed my cast mates. Such fantastic, beautiful people with care and concern for others. It was a big cast so the fact that we got along as well as we did was great.

What was the best part about working with B.J. Britt, Shiri Applebly and Constance Zimmer?
GENTRY: I’ve known B.J. for years from when I first moved to LA. He and I are both from North Carolina so we’ve always had a way of interacting that was familiar so to be cast on the same show and to be playing cousins, it was just easy. Shiri is one of the most chill women I’ve met. Her energy is one that was refreshing and funny. I don’t think she realized how funny I actually found her to be. We would start scenes with music and it just made it easy to relax. And Constance is the ONE! She is so funny. She’s funny because she sounds like Quinn, but everything coming out of her mouth is sweet, encouraging, and with a big smile along with it. They all are really special people.

What did you learn or take away from the experience? Anything surprise you?
GENTRY: Just the experience of working on a show I really care about and has a real message to share with the world.I guess the only thing I can say that surprised me is how cold it was when we shot the first episode having a pool party. It was beyond cold wearing those bathing suits.

Which of the contestants should viewers keep an eye on? And did you have any favorites you were rooting for?
GENTRY: They all are worth focusing on! Each one has a purpose and a reason. Just have to wait and see what they are.

Having worked on UnREAL, would you ever work on a reality TV show as a contestant? If so, what type?
GENTRY: Nope.

What would be your advice to anyone looking to be on a reality TV show?
GENTRY: Don’t do it.

You have also been appearing on “TURN: Washington’s Spies” this season. What is your favorite part about that role and working on the show?
GENTRY: My favorite part is working with Ian Kahn who plays George Washington. He’s been such a great mentor and friend since I was cast. Also my clothes on the show! I’ve always wanted to be in period pieces like DOWNTON ABBEY or THE KNICK because black men were not slaves then and got to dress nicely. So to be slave that also gets to wear really nice clothes like that was a surprise to me.

What upcoming projects do you have that you can talk about and fans should look forward to?
GENTRY: I just had an episode of AQUARIUS air which was a lot of fun to work on. I also have a small role in a movie coming out on Netflix called “XOXO,” and hopefully heading back to shoot more TURN at the end of the year. We’ll see. Right now I’m just settling back into Los Angeles and auditioning. That’s the real grind.

To see more of Gentry’s great work, be sure to catch him Monday nights on UnREAL on Lifetime, and look out for his upcoming Netflix film “XOXO.”