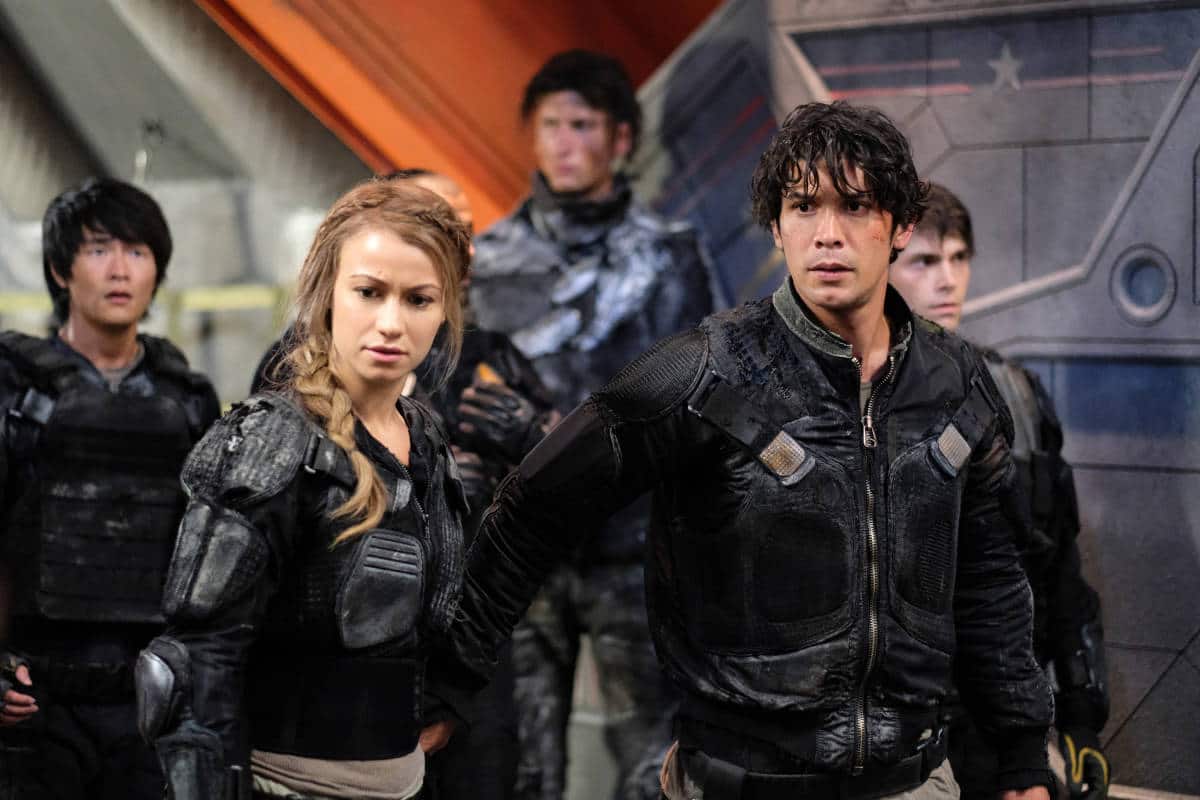 With THE 100’s fourth season racing straight towards the radiation apocalypse (aka “death wave”), the Arkadians and Grounder clans are furiously working to find a way to survive.  Fortunately, after surviving the unexpected decent back to Earth, the subsequent attacks by Grounders and Mountain Men and fencing off the hostile take-over by A.L.I.E., the survivors have also embraced one another and found love-connections in the midst of constant war and threats to their very existence.  One of the most resilient and joyous of those survivors is Harper, as exuberantly portrayed by Chelsey Reist.  In an excessive interview, Chelsey shared a bit out her love of portraying Harper and this extraordinary opportunity working on the CW’s THE 100.

To you, what is the appeal of portraying Harper in THE 100?
CHELSEY:  It’s hard to list just one appealing thing about a role so dear to my heart. The first thing that comes to mind is the ability to connect with the fans who’ve been impacted by Harper and the other characters on the show; some of the most rewarding moments I’ve had have been the conversations with fans. About their struggles and their wins. How Harper’s strength helps inspire them to overcome hardship, or even how watching me as person working for my dreams inspires them to do the same. What could be more appealing than having the stage to help encourage others? Also, I’m digging the Season 4 braid 😉

How was the character initially described to you?
CHELSEY:  Oooh… Let me think back to that one. At first what stuck out was her name. I’ve never connected with a character straight off the bat like I did when I read the name, ‘Harper,’ but I feel like a Harper! There’s some bravado to it. She was a 17 year old with a budding crush on a guy named Jasper. She was also set to die at the end of the episode. (Can I get a ‘YES!’ to that not happening!)

How would you describe who Harper is now in Season 4?
CHELSEY:  We have seen Harper forced down to Earth as one of the deliquents and she rose above that betrayal. We have seen her kidnapped and tortured in Mount Weather and she was resilient enough to exact revenge on her captors. This season, the enemy will be the Earth; radioactive storms are coming and the teens have to find a way to survive. We will see Harper take on yet a third massive torment with this cataclysmic radioactivity; but will she be able to rise above again? She’s been through so much… I’m not sure this season she can be described as resilient as she was before. She is a fighter still but Season 4 is a heavy one for her.

What do you most admire and/or like about her?
CHELSEY:  Funnily enough, her resiliency.

What has surprised you the most about Harper’s storyline so far?
CHELSEY:  That she lived to grow into such a dynamic character. She was supposed to die in the first episode she was in (Season 1 episode 10). And now she’s survived until Season 4, she has a boyfriend, and I am a series regular. I am SO grateful for such a life-changing surprise. Her finding romance in such a world that allows little time for such luxuries was also a surprise.

Now that Harper and Monty have embarked on a romantic relationship, what is your favorite part of that relationship?
CHELSEY:  His empathy toward her is pretty touching to me. He is always able and eager to focus on finding a solution to the gang’s troubles, using his beautifully intelligent brain to fight the clock. But he is also able to unplug and check back in with Harper to see how she is doing. And he takes the same time to open himself up to love. I think being a hard worker but a empathetic partner is something I would cherish in my own real life relationships.

What does Harper see in Monty that makes her heart race?
CHELSEY:  What I spoke of above. The rare moments she feels safe is in his presence.

Is there anything special Christopher does to make the romantic scenes more comfortable for you?
CHELSEY:   I wouldn’t narrow it down to JUST the romantic scenes; with any scenes Chris is the most supportive scene partner. He is open to talking with me about the goal of the scene, how I see it unfolding, how we envision the arc of it. We discuss how we think our characters would feel and then Chris is open to letting that develop naturally within the scene (which also takes fantastic directors to give us the space to do so!). He’s just a very calm presence and he genuinely cares about making good art. You can see it in ‘Monty,’ he’s a sweetheart.

You all look like you are having so much fun behind-the-scenes. Who makes you all laugh the most?
CHELSEY:  I always get a kick out of how much fun we can have when we are filming such heavy scenes. Everyone on the show has their funny moments; they know how to focus when it matters or how to crack a joke when it’s welcomed. It’s a fun job.

What has it been like working more with Christopher Larkin, Devon Bostick, Lindsey Morgan, Eliza Taylor, and Bob Morley? Any favorite scenes or moments you can share?
CHELSEY:  To have any extra time on set is always a blessing. It’s always been fun working with them, and it just gets more enjoyable as the seasons go on.

Is Harper solidly behind the decisions being made by Clarke, or is she starting to question her leadership in Season 4?
CHELSEY:   I think Harper has often trusted in and admired Clarke’s intelligence to analytically weigh the most difficult decisions. That being said, after episode 404, I would say Harper is definitely questioning Clarke’s leadership. Clarke excluded Harper and Monty from the list of people who would be allowed to seek refuge in the Ark. Clarke was exposed for secretly digging through Harper’s family records and deemed that Harper may eventually be a drain on medical resources as her father had an (as-of-yet unknown) genetic disease. This was private news that Harper had only shared with Monty. And because of it, Clarke left Harper off the list, essentially to die.

What has been the most challenging thing to learn in portraying Harper?
CHELSEY:  Honestly, it’s always felt natural to me to step into her shoes. I enjoy the challenges of exercising my emotional range when necessary. I love the challenges of filming long hours, sometimes outdoors, through the night, in the winter and on top of mountains; the show sometimes feels like a bootcamp and it’s so fun to me!

What is one of your favorite lines that Harper has said in the episodes shown so far?
CHELSEY:   ‘Or we could shocklash Pike’s fascist ass’ was a real tongue-twister, haha.

What are the odds of Harper making it alive through the entire season?
CHELSEY:  It’s ‘The 100’…. odds are rarely in our favor.

What is your favorite part about working on THE 100?
CHELSEY:  I suppose that I genuinely am a fan of the show. I watch it air twice every Wednesday and I find myself saying out loud, “ah! We have such a cool show!” I love the dark themes, the weighted acting, the amazing wardrobe and set design and the grandiose Canadian back drop. I love the bad-assery of it all. And then to be a part of it, to play the only female guard and to be able to embody that bad-assery myself. It’s so fun!

What is the one thing you have taken away from working on THE 100 so far?
CHELSEY:  Work hard. Feel grateful.

What do you hope viewers take away from watching it in Season 4?
CHELSEY: We love to create for you, we are so touched that you support us. We hope the season touches you in the same way.

Who would you like to have the opportunity to work more with on THE 100 and why?
CHELSEY:  Now if I answered that then you’d know who Harper has scenes with and who she doesn’t. Spoiiilleerrrrr 🙂

Then what are the perks of where you are in your career right now?
CHELSEY:  Lately, I find myself feeling more grateful than ever, I catch myself in moments of gratitude daily. Being on an amazing show, being able to travel the world to meet fans, having the ability to connect with or inspire other humans, these are wonderful perks that inspire ME to keep working for more. I also enjoy auditioning so much more now.

If there were one role you would like to revisit from your career, which would it be and why?
CHELSEY:  Ha! Interesting question. If I told you that then you’d try to watch. 🙂 Next question.

Has there been any great advice you have gotten?  What advice would you offer to other upcoming and aspiring actors?
CHELSEY:  Of course there is a ton of advice I’ve gotten. I soak up advice. I write down everything that I hear that touches my soul or helps inspire me on my journey. I keep friends who are positive influences in my journey, and in turn I hope I help encourage them as well. My advice to other actors is that I have learned that it’s okay to put yourself first. So much of “fighting” to be an actor is jumping at every opportunity at all times no matter what. I have noticed the need to feel stressed in many actors starting out; many of us equate(d) stress with working hard. But I have learned it doesn’t have to be that stressful ‘hard work,’ it should be ‘smart’ work. Pick and choose your opportunities when you feel healthy and rested and confident enough to do so. Genuinely enjoy the industry relationships you foster. Take a moment to practice gratitude when others have helped you achieve your goals. But also practice gratitude toward your own beautiful self and healthy body that got you there. Try to actually enjoy the ride instead of waiting for some magic moment when you think you’ll finally get it.

Are there other upcoming projects that you can share that fans should keep an eye out for?
CHELSEY:  Yes! I recently finished a short film called “Limina,” which is making international news. It stars a transgender child actor (the heart-warming Amerko Eks Mass Carroll), myself, and Lorne Cardinal (“Corner Gas”). I play a grieving mother who has lost my own child, and gender fluid, “Alessandra” helps guide me to hope again. The Leo Awards have accepted us and marked history as the film is the first entry at any Canadian award show to allow an actor (Ameko) to submit for both male and female categories. And stay tuned with ‘The 100’ Season 4! Lots to come 🙂

With those delightful teases in mind, be sure to tune in for all new episodes of THE 100 on Wednesday nights at 9:00 p.m. on the CW.  Harper and Monty’s tale is certain to to offer more juicy moments as the “death wave” approaches!